At times, Tommy Mottola doesn’t know what he’s doing—and that’s just the way he likes it. The longtime music executive, revered for developing the careers of Hall & Oates, Gloria Estefan and Shakira, among others, just produced his first Broadway show, which, he says, “makes the music business look like attending kindergarten.” Mottola shepherded a musical version of Chazz Palminteri coming-of-age memoir, A Bronx Tale, to the stage, a feat he acknowledges “is so complicated and it’s very overwhelming because there’s so many moving parts.” But the ever-confident Mottola, who also just published A New America: How Music Reshaped the Culture and Future of a Nation and Redefined My Life, clearly revels in tumult. “I don’t like it if it’s not a challenge,” he tells the Observer by phone. “My ADD would kick in too fast, and I’d be out of it in three seconds.”

You write in your book that “I was stopped cold at the age of 3” by musician Tito Puente. Can you think of the last time that music stopped you cold? Things don’t stop me cold as much as they used to, okay, cause a lot of it’s crap now, but occasionally something comes along that really just makes you stop and take a deep breath and listen. That was the first Adele single from the new album 25. I thought “Hello” was brilliant. I thought the song was brilliant, I love the production. I just thought it was as good as it gets.

When you close your eyes, and I’m asking you to close your eyes, what music do you hear? [Laughing] You don’t want to know. It’s funny, I don’t like to listen to my records because they just get me anxious. Cause I think back to all the bullshit that you go through to get there. The kinds of things I’ll listen to at home are relaxing, things to chill by, like meditation music. If I want to listen to music for dinner, it will be more like Sade or “Sinatra at the Sands.”

Growing up Italian in the Bronx, what was your interaction with Latin culture? I always think of the Bronx as a fairly segregated community. Totally, go see A Bronx Tale, you’ll understand. Basically, there was a line. And that line was if you were black or Latino, basically you couldn’t come into that part of the neighborhood. So you grow up with that. But on the other hand, I was a guy who broke the rules, so the line didn’t mean anything to me.

There was a famous story about Arthur Avenue back in the day. Supposedly, toughs sat on lifeguard chairs to watch the neighborhood. That’s 100 percent true. I grew up looking at those guys and talking to them and seeing them. They would sit there and watch the neighborhood. We just thought it was guys watching over us, you know, making sure we didn’t do anything wrong or got hurt or anything like that. And then later on when you grow up, you realize what they are, who they are. Then if you would wander from the neighborhood, which I would do with my mother or father to go shopping, you would go to The Grand Concourse and go to a record store called Cousins, and you get more of a variety of black and pop music. Or on a corner, there could be a Latin street fair, and that’s where Tito Puente performed.

‘The consumer has a more insatiable appetite for music now more than ever. So the idea that you can create something in the morning or the evening and put it out that same day and upload it is unbelievable.’

What aspects of the changing music industry do you mourn? The thing that troubles me the most is the ability to make and develop stars, because of the nature of the business and the way the music is today. To me it’s very difficult when the sales are based on the streams and all that kind of thing. And it’s all digital income. It’s completely dramatically different than for instance, if I was gonna put out Jennifer Lopez or a Mariah record, where I would sell 10, 20 or 30 million, right? I had the ability to be able to say, “Okay we’re going to dedicate another $10 [million] or $15 million to develop this artist with marketing, extra video. There’s no possible way the economics won’t allow that to do that these days with young talent. Plus there really are not a lot of people inside the companies who develop talent anymore. The companies have become much more like the movie business—marketing and distribution schemes.

Bean-counting. Much more of it than there was.

Given the democratization of social media, isn’t it easier for a new act in some ways to get noticed? One-hundred percent. The consumer has a more insatiable appetite for music now more than ever. So the idea that you can create something in the morning or the evening and put it out that same day and upload it is unbelievable—it’s great. So that part of it is fantastic and the consumer’s in control. That’s the other difference. Before, we were in control. We controlled the entire supply chain. We found the artist, developed the artist, we nurtured the artist, we imaged, helped image the artist, we recorded the artist, we created the videos, we distributed the music, we controlled retail, we told them where to place the music in the store with the merchandising that we want, and we set the price. And I was the first guy to cut out singles. You love the single? You gotta buy the album, and it’s 18 bucks. So it was a time for the business to flourish. We were making billions of dollars and hand over fist. But obviously that created a backlash down the road where the consumer said, “I don’t want to do this anymore. This is what I want.”

Offer, say, three practical steps that an aspiring young executive can take to break into the business? Take three steps back and get out the door and go do something else. [Laughs]

You dropped out of college. Do you think higher educating is a poor investment? I was unique in the respect that I knew what I wanted to do—I did it from childhood. I was a musician, I was an artist on Epic Records. I had a brief deal putting out a couple of records. I got in the studio, I produced music. I knew promotion. I did all that. So wasting time in school for me was sort of nothing more than just anxiety. I wanted to get to work cause I knew what I wanted to do.

But if you saw on someone’s CV who is passionate but didn’t have college, would you give them a shot? In a heartbeat. Absolutely. You know I think the diligence of getting an education, and the things that you can learn in a more well-rounded background are also great assets. I don’t discourage it or put it down. I’m just saying for me, it didn’t work. And I would not hesitate to hire somebody who I saw a glimmer or a gleam in their eye and the passion and the drive in their heart and soul to go and do something great in this, or any business.

As the husband of a Mexican woman and a booster of Latin American culture, are you concerned by the rise of xenophobia in the country? And do you expect the Trump administration to spur a wave of protest music? No, I don’t expect that at all. I think there needs to be laws about immigration and more rules, number one, but I also think that a lot of the crazy rhetoric is going to fall by the wayside. I know this guy. Trump wants to win more than anybody that’s ever been in that position. And he really wants to do good. He’s a lunatic—people think he’s this and that and the other thing. And his presentation obviously is not always the best presentation. But I think he’s going to look to take a trillion dollars and develop inner cities, whether it’s schools or gyms or playgrounds or programs. Unlike the last couple of administrations that just bullshit about it, and they use the vote, and they don’t do anything.

If you could pick one person who you think gave you a leg up at a critical moment and made your career, who would you thank today? Well, there are a couple of people. When I managed Hall & Oates in the late 70s and early 80s, I was very close to David Geffen, and he really taught me a lot. Clive Davis was an inspiration. But I used to look at him sort of on a pedestal cause the guy was sort of untouchable.

Who reached their hand down and grabbed you up? One man. His name was Mel Ilberman, and he was a guy that I met when I was managing Hall & Oates. He was the COO of RCA Records. He was an administrative guy. Strictly a business guy. So he dealt with distribution, business affairs, that kind of stuff. Not a creative guy. But he would say things to me like, “Don’t do this, kid because you’re gonna get yourself in trouble,” because I was always pushy inside the record company. And he would point me in the right direction to not cut my wings but to give me guidance as to how I wasn’t going to fall down and get hurt inside of his own company with his executives. The second time he did it was when he was at Polygram when I was managing John Mellencamp, and he did the same thing for me. Cut to 1988 at my late 30s, I get the job at CBS Records to become the youngest president of a major multinational record company of the world. I knew how to make hit records, I knew hit songs, and I knew how to promote them and get them on the radio. I had no idea how to run a major corporation. So the first guy that I call when I get the job was Mel Ilberman. And I said, “You have to leave Polygram. You have to come with me.” Because I knew I needed somebody to help me save my ass. Dealing with finance, business affairs, international, all the internal accounting stuff, distribution, all those things that he’s done his whole life. He was my executive VP. He was the only guy that I allowed to walk in my office and tell me, “shut the fuck up, you’re gonna fuck this up, and you’re gonna go down the tubes.” I let him look me in the face and tell me that because I respected him and loved him so much.

And everyone needs that person, don’t they? You need it. You need a guy to tell you, “You’re gonna screw this up bad.” 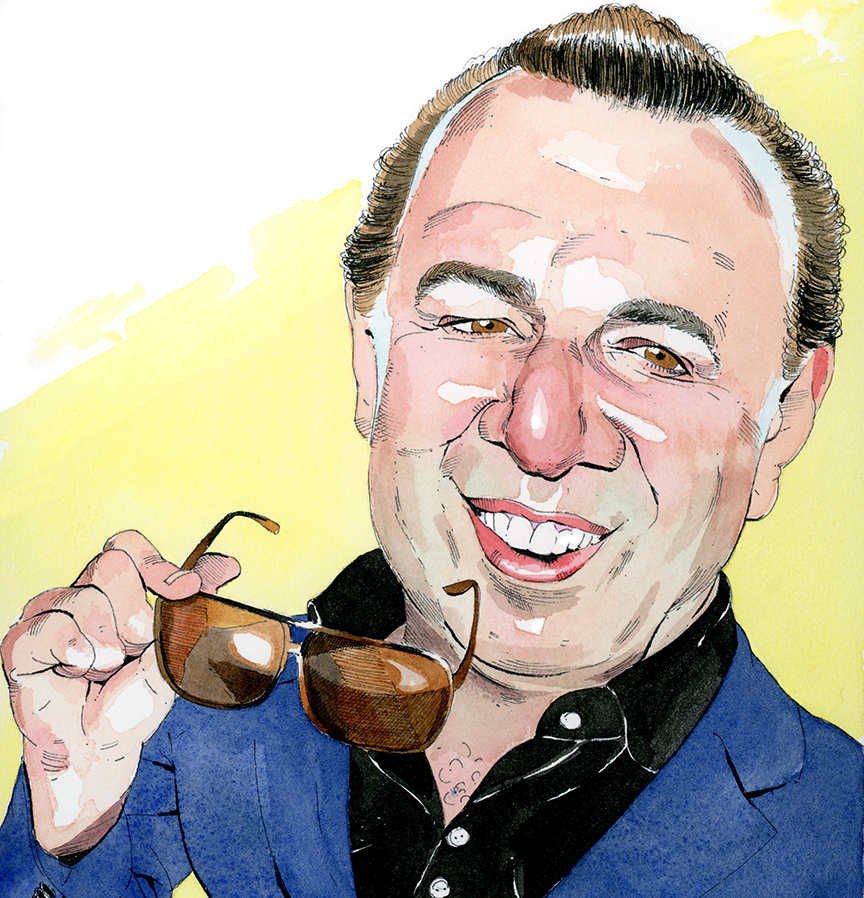