A boutique fitness class isn’t truly trendy, or effective, until a Victoria’s Secret Angel posts an Instagram photo there. It’s basically science. Of course, some choose to keep their sweatiest moments off of social media, but most are proud of their effective fitness regimens, and are probably contractually obligated to show off their Victoria Sport ensembles.

The majority of winged models train at the highly intimidating Dogpound, but they all mix up their jabs with lengthening, toning classes with more elegant fitness classes. If you’re considering trying a new class after seeing their red carpet looks, and know you’ll be ready to book after the live broadcast on December 5 at 10 p.m., consider scheduling these classes now.

Literally every Angel has been spotted training here during the past few months. Josephine Skriver, Sara Sampaio, Adriana Lima and Martha Hunt are just a few who have posted Instagram photos from inside the trendy, intense gym in Tribeca. Mere mortals can book 24 private sessions with owner Kirk Myers, but it will set you back $8,400. Still, the hardcore workout costs less than the $3 million Fantasy Bra, and is worth it, if you wish to wear that pricey bra one day. It’s no wonder Dogpound is an official Angel favorite, as it offers a healthy mix of boxing and toning, with every class and session focused entirely on the core.

Doutzen Kroes and Lily Aldridge are both close friends with former ballerina, Mary Helen Bowers, the founder of Ballet Beautiful. Their sculpting workout is similar to a typical, tough barre class, only leotards and tights are worn in place of leggings. The Upper East Side and Soho studios use mat work and focuses on tiny movements to create toned bodies.

Noah Neiman, the Instagram-famous founder of Rumble Boxing, was most recently seen training Angel Cindy Bru. Neiman is known for his appearance on Bravo reality show Work Out New York, guaranteeing he knows exactly what it takes to look good on camera. While Rumble hasn’t even opened yet officially, there’s certainly going to be a line outside the door after seeing Bru’s body.

Adriana Lima and Bridget Malcolm are both fans of Michael Olajide, Jr., the co-founder of Aerospace. This retired boxer boasts a client list that are in such good shape, they could literally walk from his gym onto the runway. Anyone who has ever questioned how strong Angels actually are will be scared to fight one, after seeing them in the ring with Olajide.

Martha Hunt and Bridget Malcolm have both sang the praises of Body by Simone on social media. The Chelsea studio offers toning, trampoline and dance cardio classes. With two locations in Los Angeles, they can jump on the trampoline wherever they are (although probably not in Paris).

While tons of models have been spotted at modelFIT’s Bowery and West Hollywood Locations, Taylor Hill has been fastidiously documenting her progress on Instagram. The super fit Hill has been on the road to the runway alongside trainer Lauren Ashley Duhamel, a modelFIT favorite. One look at Duhamel’s insane abs on Instagram will convince anyone watching the show to immediately book one of her model-worthy classes.

One of Dev Windsor’s recent workouts was a departure from the typical boxing and sculpting classes. Windsor posted a photo from Bandier’s Studio B, where she was taking a Banana Skirt Formation choreography class taught by Tiana Hester. It might not be quite as intense as the Dogpound, but you can’t go wrong channeling your inner Beyoncé before hitting the runway. 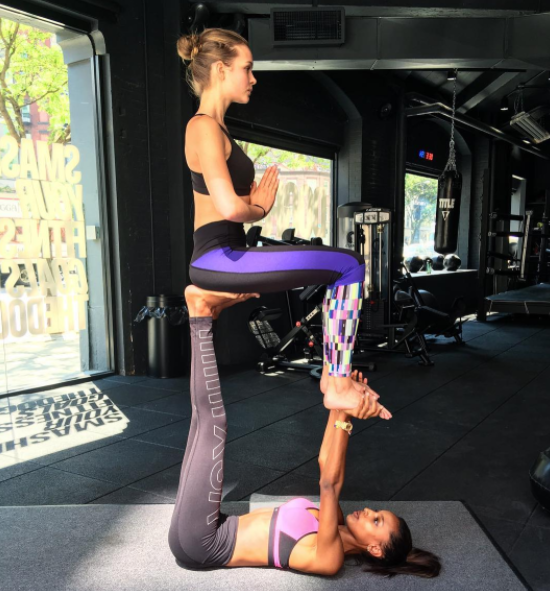