It wasn’t until after the 2010 midterms that then Senate Minority Leader Mitch McConnell made the comment bringing Democratic wrath down upon his head—that what he wanted most was for “President Obama to be a one-term president.”

Really, McConnell hadn’t done anything wrong—except show his hand. In baseball you root for your team no matter who becomes manager. Not in politics. For Barack Obama to succeed would have meant passing things McConnell thought despicable. Any principled Republican would—and should— have wanted him out after four years.

As any principled Democrat should now want for Donald Trump.

Not everyone agrees, especially those who imagine Democrats must imitate the mulish way Republicans supposedly went about trying to achieve that. One writer recently posed the Democrat’s choice about how to handle the new President as a dilemma (“Resist Trump at every turn … or compromise.”).

It’s not even close. Resist wins.

First, Trump has already made clear what’s in store. He’s appointed a climate denier as head of EPA, an opponent of minimum wage to head Labor, and promised that he’ll put someone on the Supreme Court who will likely vote to overturn Roe v. Wade. No matter what Trump says about cutting deals, the road ahead is obvious. Republicans will roll back much of what Democrats most cherish.

Second, the decision to resist or compromise is not an either-or dilemma. Despite the popular view, Republicans compromised plenty over the last eight years. This month, one Republican leader proudly ticked off a long list of 114th Congress bipartisan achievements—on highways, Medicare, No Child Left Behind, oil-exports and a few hundred others. “We worked together,” said a smiling Mitch McConnell.

It was on a clever assortment of the key issues—funding government, upping a borrowing limit, immigration reform, and of course, Obamacare—that Republicans held firm.

And what McConnell urged worked. Yes, Obama got his second term. But looking back, steps like those 47 losing votes to repeal Obamacare helped weaken support for the biggest advance in health care since Medicare. They ensured that Trump could make the highlight of his rallies a pledge to do what Republicans couldn’t do in Congress.

Some Democrats take comfort in the way Latino immigration and birthrates will at some point favor them. They already do. But to win back the White House before Trump dismantles everything? Democrats can’t wait, especially when it comes to winning back the 42 million white non-college-educated ex-Democrats who make up about half the Trump supporters.

This doesn’t mean winning back every one. Not after an election where Clinton won the popular vote by almost 3 million, and where 160,000 votes in three states would have given her 270 electors.

When I worked for Democratic Majority Whip David Bonior in the ’90s he ran up a healthy majority in Michigan’s Macomb County, home to many so-called Reagan Democrats. Bonoir found ways to win voters by never forgetting the issues animating them: health care, taxes, jobs, and foreign affairs.

Like Mitch McConnell, Democrats don’t have to abandon compromise. They need to dig in their heels over the Trump pledges making some of his supporters queasy.

Here are four issues where Democrats should go to the mat.

HEALTH CARE: About a third of those twenty million newly insured people under Obamacare are white, and working class. That’s the heart of Trump support. Does Trump really want to throw them under the bus? Seems unlikely, but that’s exactly what “repeal” means. Democrats can establish themselves as champions of those 20 million by drawing a line in the sand and refusing to yield.

TAXES: The Trump tax plan gives everyone making over $3.7 million a year, an annual tax cut worth a jaw-dropping $1 million. Enough to buy 15 Teslas a year. The middle class? If you make, say, $100,000 a year your cut won’t buy a Tesla battery.

Forty percent of Republicans think the wealthy make too much. Trump and his billionaire cabinet secretaries don’t need that money. Why not propose they donate what they’ve awarded themselves to the US Treasury?

JOBS: Most white Republicans favor an increase in the minimum wage. And white Republicans like veterans, too. There are 495,000 unemployed veterans in the U.S. Why not cut that to zero? They fought for us. Democrats should fight for them. Would Republicans vote to block a jobs and minimum wage bill like that from coming to the floor? Let them try.

RUSSIA: Yes, 37 percent of Republicans like Vladimir Putin. They like him more than they like Barack Obama. But 47 percent dislike Putin. Soon after Trump takes office, regardless of what a Select Committee does, Democrats should introduce a tough sanctions bill punishing Putin and Russia for its well documented interference with the November election. They will lose. But won’t they peel away some of the 47% of Republicans who aren’t Putin fans? I think so.

Like McConnell, Democrats don’t have to abandon compromise. They need to dig in their heels over the Trump pledges making some of his supporters queasy. Thanks to his tongue and his tweets there are dozens. Resisting those, even a minority party can bring amendments to the House or Senate floor, force a vote, debate, filibuster, and hit the talk shows.

And while Democrats resist, here’s one part of the Republican playbook Democrats can discard: the loathsome compost heap of vitriol, lies and caricature Trump and Republicans used to defame Barack Obama and Clinton.

Republicans are no less principled than Democrats. In fact, over the last six decades, Republicans have steadily lost ground by clinging to principled, wrongheaded ideas. That’s true on issues like smaller government, balanced budgets, and less regulation, or social issues like abortion, women’s rights, or prayer in schools. You have to admire people willing to lose so much by clinging to bad ideas. There’s no need to smear them.

We can even admit when they are right. We can say no with civility, and yes without making Trump look good. And we will profit from some of the ridiculous beliefs Trump’s strategists have boasted about since November 8th.

“Nobody cared about solutions,” crowed one of them recently at Harvard’s bitter post-election staffer debate.

Another said, “You may have the best policy in the world to get every single American the best job they’ve ever had. Nobody cared.”

That’s not just cynical. It’s naive. Plenty of people care, including white people who never set foot on a college campus. If Democrats pick their issues and don’t give up, they can bring enough voters back to matter.

So, Democrats, let’s not be shy about admitting the truth: we want a one-term President. Denying we feel that way is as believable as the way we pretended shock at McConnell’s candor six years ago.

Democrats will almost certainly lose Senate seats in 2018. But done right, a steady, unyielding McConnell-like campaign, leavened with compromise as they did, can win back voters we should have captured this time.

Let them call us obstructionists. We don’t have to agree with Mitch McConnell’s views. We just have to learn from his example. 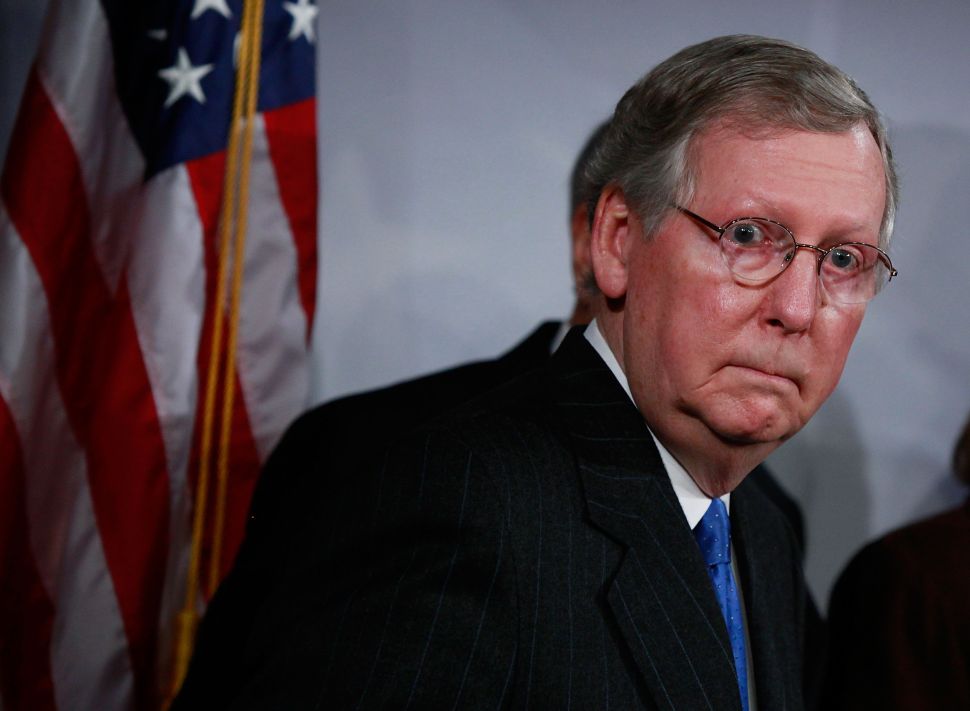