Congresswoman Carolyn Maloney announced today that the House liaison for President-elect Donald Trump’s transition team has joined her effort to get the federal government to fully reimburse the city for protecting the incoming commander-in-chief, his properties and his family.

Addressing reporters in the press pen near Trump Tower this afternoon, Maloney—in whose district the president-elect’s Fifth Avenue Xanadu stands—announced that GOP Buffalo-area Congressman Chris Collins had agreed to sign on her push to convince Washington to reimburse New York City $35 million for guarding the president-elect and his interests between Election Day and Inauguration Day. Collins was the first sitting congressman to back Trump for president, and House Speaker Paul Ryan appointed him emissary to the administration-in-the-making last month.

“I did talk yesterday with Chris Collins, who’s been designated as President-elect Trump’s appointment to the transition team from Congress and he said he would sign the next letter that we are sending that we sent out today,” she said. “We are hopeful that we can get every member of the Democratic and Republican delegation to sign the letter and if not, we will let you know who is signing and who is not signing.”

The short-term spending plan the Republican-dominated House passed earlier this week set aside just $7 million for New York City’s vast protection effort, enough only to cover NYPD overtime. Congressman Jerrold Nadler, who appeared alongside Maloney today, refused to answer whether they fear the low allocation could set a precedent for future compensation, especially since the five boroughs have just one voice in the GOP majority—Congressman Daniel Donovan of Staten Island.

“I don’t wanna say that at this time,” Nadler said. “We do not know that. We are hopeful that is not the case.”

Nadler saw a glimmer of hope in Congress’s calls for additional paperwork from the city to demonstrate expenses—that “they did leave the door open.” Still, he stressed that the city did its part, and pushed back on claims from some in Washington that Mayor Bill de Blasio submitted his invoice late and with sketchy details.

“The city submitted what it felt was adequate documentation and some of the leaders in Congress asked for more documentation,” he said.

Like the mayor, Maloney voiced confidence that Trump himself will ultimately side with the city.

“I think he’ll stand up for New York,” the Hillary Clinton surrogate said.

The congresswoman explained that Congress has requested more documentation from the city to delineate the costs, which she said the NYPD is providing.

“There are special units, there are undercover units, there are the regular police that are standing here with me right now,” she continued. “They wanted a detailed outline of the costs and we will be working very hard to give that to them as quickly as possible.”

“I think there’s a reasonably good chance if we push it,” she added.

This optimism contrasted with Maloney’s claims on Wednesday that getting reimbursement at a later date would be “uphill battle.”

Today, Mark-Viverito asserted that protecting the Trump complex was costing the city $500,000 a day—half the widely reported $1 million daily figure. But she asserted that amount is still far more than the city can afford, and noted it was the president-elect’s choice to interview and entertain candidates for his administration in Manhattan instead of at properties in New Jersey or Florida.

“The concern we have as a city, as a City Council is oversight, the financial, fiduciary responsibility of our budget,” Mark-Viverito continued. “$500,000 a day again is not sustainable and New Yorkers should not have to pay 80 percent of the expense of a decision that was made by this transition committee to hold its headquarters here. 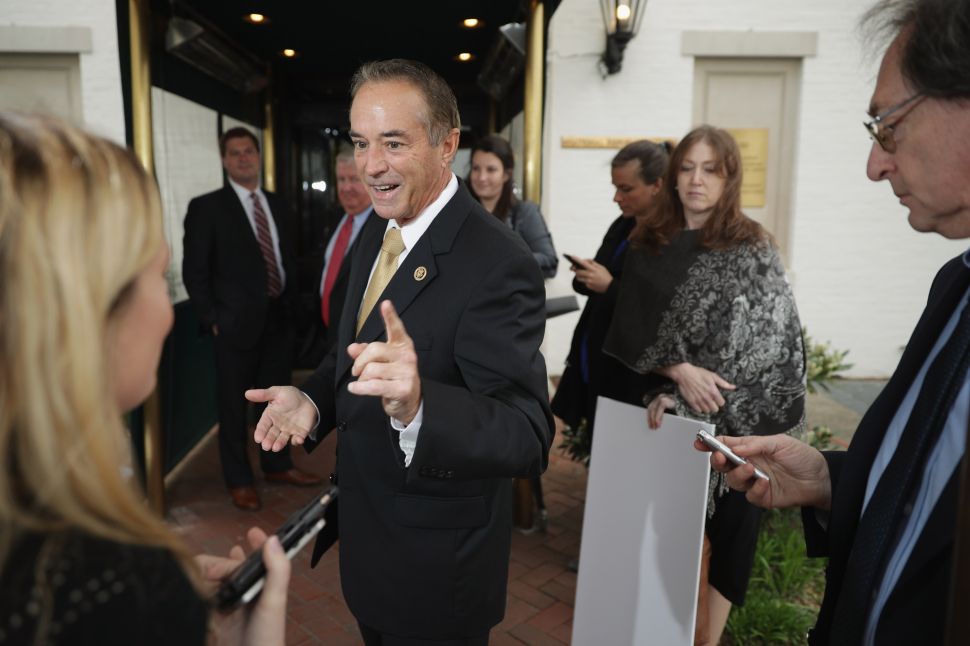