Once again, we here at tvDownload forwent the traditional “Best of” lists for television, and instead are taking things yearbook-style: we’ve asked several contributors to help us pick shows, characters and actors that fit into the superlative model, and will be rolling out the awards through the holiday season. Today’s nominees are for Cutest Couple, Most Improved and Class Clown.

VICTORIA EDEL: Luke and Lorelai, Gilmore Girls: A Year in the Life. The wedding we waited for finally happened! And it was schmoopy and corny and life-affirming.

TOM BATTEN: Billy and Julie of Difficult People are more than a cute couple, they’re a perfect united front engaged in an endless battle only they truly understand. There is no better couple in television, or in the world. Your marriage is a sham compared to what Billy and Julie share. Accept it and move on.


NOAM COHEN: Oh god, Daryl and White Josh on Crazy Ex-Girlfriend. I’ve never wanted to hug a couple on TV more than I want to hug them. They’re just the most lovable unlikely wonderful pairing.

NICK ROSS: CW’s DC Crossover The delightful foursome of Arrow, The Flash, Supergirl and Legends of Tomorrow coming together to make some sweet, sweet, television.

EMMA FRASER: I stopped watching The Walking Dead last year, but am still very up to date on all things Rick and Michonne thanks to Tumblr and the Richonne tag. So this one goes to them as I know there is still time for hand holding, smooching and super steamy action all while the zombie apocalypse is occurring and dangerous dudes with bats linger.

DANA SCHWARTZ: Alex and Maggie from Supergirl. The kiss that launched a thousand Tumblr gifs! Sure, we all saw it coming but that didn’t make it any less satisfying when that moment finally came. Alex is the girl who always had to feel like she was second best in the Danvers family—if anyone deserves a sexy love story, it’s her.

LORRAINE DUFFY MERKL: Lorelai and Rory Gilmore: Where they lead, we will follow. You can’t have one without the other.

JAKE FLORES: Naz and Andrea from The Night Of: I’ve only seen the first 10 minutes of this show, no spoilers please.

JOSHUA DUDLEY: Detective William Murdoch and Doctor Julia Ogden from the Canadian television series Murdoch Mysteries. He’s charming and gallant and she always keeps him on her toes with her turn of the century feminism and a clever turn of phrase that always makes him smile.

VINNIE: Oswald Cobblepot and Edward Nygma, Gotham. If you’re one of those “making the Penguin gay ruined my childhood” kinds of people, I don’t understand you; I’m reasonably sure Oswald Cobblepot falling in love with Edward Nygma retroactively made my childhood better. Yes, technically they weren’t a couple, because A) the Riddler had no idea any of this was happening and B) whoopsies, Penguin murdered his girlfriend. But that’s love!

DREW: Dolores and William, Westworld. Okay, guys. I know what you’re thinking. “Drew, this is TOO obvious a choice, like putting Exit Music for a Film as the finale montage song when you’ve been using Radiohead to do your heavy lifting for ten weeks.” Also, the whole “possibly raped, DEFINITELY robo-murdered” thing.

But I can’t help it, I find the whole William/Dolores storyline so…romantic, in it’s own weird, time-tripping way. Their loops keep bringing them back to each other! And remember that train car sex scene, where we all had that uncomfortable epiphany that a McPoyle was ripped? I’m really hoping these two crazy kids self-aware robot and one-armed, Lou Reed-attired corporate president/robot serial-killer (like, a serial killer of robots, not a robot that IS a serial killer? You get it!) find a way to make it work!

VICTORIA EDEL: Veep. Who knows how we’ll feel about this show next year, with President Trump, but this year it was the best thing.

TOM BATTEN: NBC’s freshman hit This Is Us embodies the concept of class clown in that it’s desperate for your love and attention and isn’t very funny.

DANA SCHWARTZ: Gene Belcher, Bob’s Burgers. No one else is bringing fart sound effects to quite the comedic height as the young Mr. Belcher.

NICK ROSS: Samantha Bee, Full Frontal with Samantha Bee Late night is dominated with men and Samantha Bee proved she’s funnier than all of them and is one of the most important voices we have on television today.

VINNIE MANCUSO: With barely a week left in 2016, the first episode of Netflix’s The OA emerged as quite possibly the funniest thing I’ve ever seen. This holiday season I recommend you demand your family members call you “the OA”, because apparently this is something no one will question and you’ll never have to explain.

DREW GRANT: John Early as Elliott in Search Party. There’s something just so wonderful and hilarious in how despicable and oblivious he is that you can’t help but wish that he’d write about you in his memoir about lying.

EMMA FRASER: Zoo for making even a sloth evil and causing Bob Benson to backhand slap someone into telling him where the evil sloth is.

VINNIE MANCUSO: Everyone’s going to say Jon Snow because technically going from dead to just pale IS an improvement. But I feel like the better upgrade this year was Sansa Stark’s transformation from frilly-laced embroidery-doll to QUEEN OF THE FUCKING NORTH written in big sparkly letters with, like, cool-looking icicles hanging from the sides. I don’t know. Sansa straight up fed a dude to his own dogs, though, so, you know. Big year for Sansa.

VICTORIA EDEL: Jon Snow, Game of Thrones. Resurrection from the dead has to be most improved, right? (Vinnie’s note: I told you!)

JAKE FLORES: Jon Snow from Game of Thrones (SPOILERS!): He went from being dead to being alive. That’s a pretty big improvement. If I was the teacher for an 11th grade class on how to be alive and one of my students was dead at the beginning of the semester, but then a goth girl did reiki on him and he got up and started talking about pincers and beat up the school bully I’d say “hey Jon, you have improved quite a bit at being alive since the beginning of the semester.”

EMMA FRASER: Marnie Michaels is still kind of the worst and always self-centered on Girls and yet thanks to a night with an ex, some sequin sweats and ending things with her terrible husband she somehow became endearing in her awfulness.

DANA SCHWARTZ: Girls. The last season of Girls has been a vast improvement over the sophomore slump the HBO show had sunk into over the past few years. Lena Dunham’s tongue-in-cheek show about self-centered milennials is either love it or hate it, but this last season has given us a lot more to love.

NICK ROSS: Seth Meyers, Late Night with Seth Meyers We never stopped liking Seth Meyers but it took some time for him to find his place in Late Night. Some hosts were happier rustling people’s hair to challenge the things being said and Seth Meyers and his staff were some of the only ones to speak out.

JOSHUA DUDLEY: Netflix. Their original programming is improving by leaps and bounds every year and the amount of freedom they give to the creators is a breath of fresh air. It’s sick that Voltron came back and almost no ones talking about it.

DREW GRANT: Jon…NOLAN! That’s right, I’m nominating 1/2 of the Nolan nightmare for “Most Improved” this year. After Inception, I was like “Never again, motherfuckers.” I hate when shit is complicated for no other reason than complicated equals good. But damn, Westworld, yo. That maze was mad easy, we all guessed the twists, and it was great. A+, Jon! 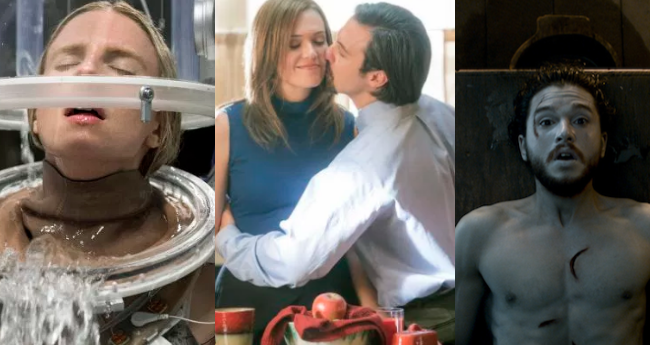