In the latest twist in the evolving story of how Moscow and its spies interfered with America’s 2016 election cycle, U.S. intelligence has determined that Vladimir Putin himself was deeply involved in the secret operation to discredit the Democrats and Hillary Clinton.

According to NBC News, our Intelligence Community has “a high level of confidence” that Russia’s president ”personally directed how hacked material from Democrats was leaked and otherwise used.” Putin’s motivation was revenge, according to unnamed senior IC officials, since he despises Clinton, plus the Kremlin sought to create confusion in the United States to make us appear an unreliable ally and an ailing global power.

To anybody acquainted with Putin and his Russia, this is entirely unsurprising. The Russian president grew up in the KGB and long worked in counterintelligence. To his core, Putin is a secret policeman, what Russians call a Chekist—a term worn with pride in the Kremlin. It’s an easy bet that Putin was briefed on this most special intelligence operation daily; it was very likely the first item in his morning briefing from Russia’s spy services, a quotidian event that Putin—unlike our president-elect—takes seriously.

For a former KGB officer, humiliating the hated Americans by disseminating the embarrassing emails of our top politicians is the summit of glee. The takedown of Clinton, Inc.—and no matter the reality, this is unquestionably how it’s being sold, with smiles all around, by Putin’s inner circle—was by any standard a very successful operation. A century hence, it seems likely that Moscow’s spies will rank this achievement among their “greats” like the TRUST operation and the Rosenbergs.

However, some salient facts about this secret Kremlin operation need to be understood. In the first place, there wasn’t much “hacking” going on here. Instead, most of the purloining of emails from top Democrats fell under normal 21st century signals intelligence operations of the kind done by Russia, the United States, and pretty much every technically advanced country on earth. Everybody spies—among adults this isn’t a controversial statement.

What set this year’s election games apart, however, was how the Kremlin weaponized what its spies in the ether had systematically purloined, disseminating it through its Wikileaks front to harm the Democrats. Russians intelligence has countless emails from American politicians of every stripe—if you’re a Washington macher of any variety who uses email, it’s a safe bet Moscow reads them—but this year it only wanted to expose the ones from Democrats.

Russians call this kind of nasty covert action scheme Active Measures, and Moscow’s spies have been doing it a long time. The only novelty here is that the Internet makes it devilishly easy to disseminate such disinformation, to use the proper term, quickly and anonymously. As the Internet has sped up our news cycle dramatically, it’s made spreading disinformation faster and easier, too.

Our biggest problem resides in the Russian moles in Washington who haven’t been caught.

The Kremlin has done this sort of thing many times to countries it dislikes or fears, indeed it’s old hat to a seasoned Chekist like Putin. But the Russians have never done anything quite this brazen to their “Main Adversary”—as they called America during the Cold War and today do again. To be clear, Putin ordered his spies to execute strategic Active Measures against the United States and top Democrats in 2016 because Moscow possessed enough stolen information to do so. He didn’t fear retribution.

Here we need to see this from the Russian point of view, briefly. Putin has a very different way of looking at espionage than American spies do. Russian intelligence culture is its own breed of cat—cagey, conspiracy-minded and dangerous when cornered. They play the long game and take risks that no Western spy service would. For Chekists, the crown jewel in the SpyWar—the never-ending clandestine conflict between states, seldom seen by the public—is offensive counterintelligence, that is gaining control of the enemy’s intelligence apparatus to deceive him. Russian intelligence aims to create what counterspies term the “wilderness of mirrors,” and over the last century the Kremlin has gotten very adept at this cunning game.

Viewed in this manner, several important spy stories in recent years come into focus and can be understood for what they really are. American counterintelligence, which has never been a high priority in Washington, suffered complete collapse during President Obama’s two terms. In matters of basic security, Obama’s inattention and escapism amount to presidential dereliction of duty. Pretty much all our Federal agencies have been hacked by Russia and/or China, including the White House itself, while the pillaging of the Office of Personnel Management ranks as a security debacle without parallel in espionage history.

Then there’s the case of Edward Snowden, who, contrary to vast media myth-making, did enormous damage to Western intelligence by stealing and leaking 1.5 million classified documents, many of them relating to enormously sensitive intelligence programs. Snowden has been working for the Kremlin since he landed in Moscow in late June 2013—and perhaps before. It’s no coincidence that he was shipped to Moscow by Wikileaks, since that vaunted “privacy organization” has been doing Putin’s bidding for years, long before Julian Assange went on a crusade to take out Hillary Clinton.

Our biggest problem, however, resides in the Russian moles in Washington who haven’t been caught. There was one clear counterintelligence success on Obama’s watch, the roll-up of 10 deep-cover Russians spies in the United States in the summer of 2010. That operation, called Ghost Stories by U.S. counterintelligence, was a genuine coup, although it had been in the works for years, long before Obama moved into the White House. Putin was furious at our unmasking of his network of “Illegals” (to use the Chekist term) in America and he wanted revenge—which he got in 2016.

The most important aspect to Ghost Stories, however, was the dog that didn’t bark. In the course of the extended IC investigation of Russia’s Illegals network, it became obvious that Moscow had several moles in Washington, including inside our intelligence agencies—with one or more burrowed into the National Security Agency, our most important spy service—and Snowden wasn’t one of them. The evidence for their existence going back at least to 2007—and perhaps even earlier—is overwhelming to anyone who understands Russian spy tradecraft, what the Kremlin calls konspiratsiya (yes, conspiracy). Since no Russian moles in our nation’s capital have been unmasked over the last six years, it’s safe to assume they’re still active.

In this light, the events of 2016 come into proper focus. Putin confidently executed a strategic spy operation against our election, specifically to harm the Democrats and their presidential nominee. Russia’s president didn’t fear retribution, as he correctly assessed that Obama was too timid and eager to win Russian favor to respond in any meaningful way. After all, the White House in 2015 quashed a tiny State Department effort to counter Kremlin disinformation, which was taken in Moscow as a green light to put their spies-telling-lies machine into overdrive.

Moreover, Putin knew what the Obama administration would (and would not) do about this massive and aggressive jump in the SpyWar thanks to his moles in Washington. It seems highly likely, based on available evidence, that Russian intelligence has been reading secret U.S. communications for years—that’s what moles inside NSA are for—which would give Putin the ability to beat American spies every step of the way, not to mention deep insights into top-level decision-making in Washington.

This all resembles the famous XX Committee of World War Two fame, after which my Twitter feed and my blog are named. That was the remarkable British counterintelligence program which first caught all the German spies in the UK, then turned them into double agents without Berlin noticing. They became a channel for disinformation with war-altering impact. Patiently, British counterspies fed bogus intelligence to the turned German agents, fooling the Nazis time and again. Most importantly, they provided Berlin with wrong information about the time, size, and location of the Allied invasion of France in June 1944.

The key part of the XX Committee was the fact that British spies could read secret German communications, unbeknownst to the Wehrmacht. This was the famous ULTRA secret. Cracking the Enigma code machine, thanks to the Poles, gave London the ability to see that their disinformation was believed by the enemy. They knew that turned German agents were really working for Britain, not their original masters, and they could see that their lies were accepted as truth. This made the XX Committee one of the great successes in the annals of espionage.

Looking at the available evidence with the eye of a counterintelligencer, it’s alarmingly plausible that Russia has done something similar to us in recent years. Putin acted so brazenly in 2016, subverting our election, because he knew he could get away with it. Moreover, as someone who’s been critical of President Obama’s many foreign policy missteps, particularly regarding the Russians, it bears pondering that some of his underperformance may be attributable to the serious possibility that the Kremlin has been reading his mail.

We need to get to the bottom of the SpyWar which Putin and his intelligence agencies are waging against the West. Before we can fight back we need to see things as they really are. America fell victim this year, but it’s a safe bet that Germany and France—both of which are electing new leadership in the coming year—will be the next targets for Kremlin spies-telling-lies. Democrats desperately want to know the truth about what happened in 2016, and rightly so. However, answering that complex question—which can only be addressed by going back to 2009, at least, with fresh eyes and bracing honesty—will reveal unpleasant truths they will not welcome. The critical first step to unraveling ChekistGate is admitting what really happened. 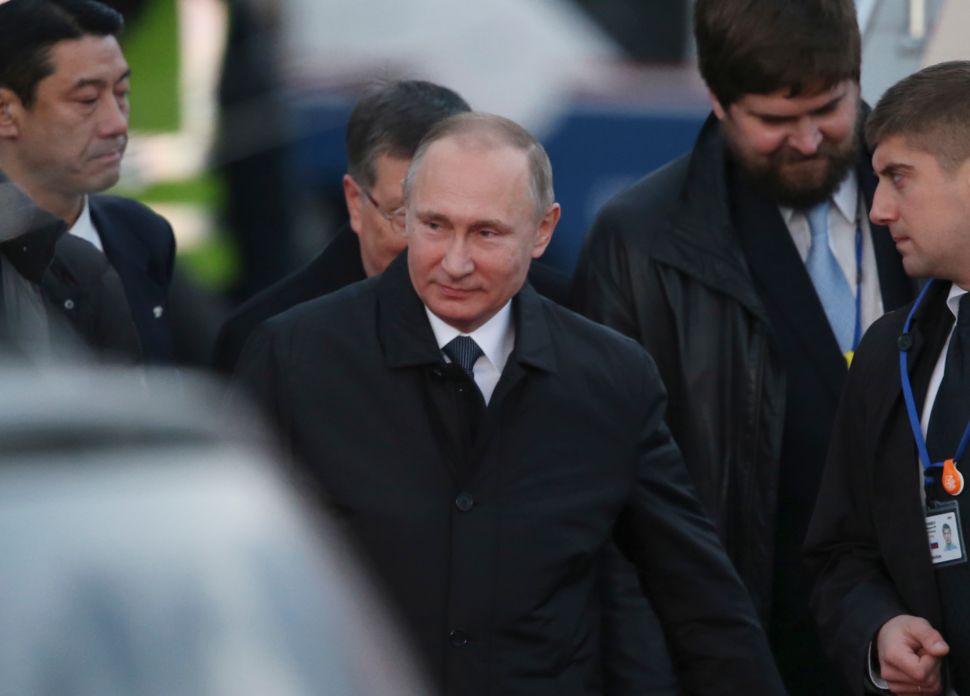