“I have to tell you my new favorite joke,” Uzo Aduba says. “I literally died laughing at it for half a day. You ready? Why did the chicken cross the road?”

I mumble something that probably sounds like, “To get to the other side.”

“To get to the idiot’s house,” Aduba says. “Knock knock.”

“The chicken.” And with that, Aduba descends into laughter. She insists the joke works better in print, but I’ll contest it works pretty well when it’s delivered by a two-time Emmy winner.

Aduba catapulted into mainstream recognition for her tender portrayal of Suzanne “Crazy Eyes” Warren on Netflix’s hit original series, Orange Is the New Black. In 2014, she won her first Emmy in 2014 for outstanding guest actress in a comedy series. A year later, she won a second time—best supporting actress in a drama—making her the only actress to win awards in two different categories for the same role.

From its first season, Orange Is the New Black was a show that defied television convention. For one, it was a show that focused almost exclusively on women’s stories, showcasing narratives about power and fear in a world in which male attention was an almost useless currency. It’s also one of the most diverse shows on television—one of the first to showcase a transgender actress portraying a transgender woman, and, as Aduba brings up, one of the only shows that depicts a variety of racial experiences across a number of different races.

“As many shows are there are on television that are diverse, now, we still don’t see a lot of television where we see a swath of different characters on a single show,” Aduba says. There’s Orange Is the New Black, Aziz Ansari’s Master of None, Shonda Rhimes’ shows, “and not many more. We still haven’t rounded that corner. It’s not just enough to have different faces speaking for different groups but different faces all within the same group, speaking to all people.”

No character in Orange Is the New Black is the “token” minority: a character who pops up to offer an opinion on behalf of his or her entire race, whose main purpose in the narrative is offering guidance to the white protagonist and offering comfort to the viewers at home that they aren’t racist.

“There are people who think this isn’t for them because they’re not a woman, or because they’ve never been to prison, or they see people of color and think it’s not for them. On the side of gender, people are realizing gender has nothing to do with it. You tell an honest story, an honest story lives inside of all of us.”

That love of storytelling was what brought Aduba from her path of becoming a classical opera singer to becoming an actress.

“In high school, I knew I liked to sing, and my voice happened to sing in a classical fashion, so that seemed like the most sensible thing to do next. But when I went to school, I realized what I loved about singing was the storytelling aspect. Boston College has a classical program, so in the morning I’d be rolling on the floor for movement, and we had to take acting and Shakespeare for the theatrical component, and then the afternoon we did the musical component—musical theory, music history, and I was like, I think I like the rolling on the floor part more.

“When you go into college, you’re in this period in your life where you have so much certainty and uncertainty at the same time. You’re so sure of some things, like, who you think you are and the person you want to be, and then going to school can either cement that for you and confirm, or, for a lot of people, I think it winds up breaking you wide open and making you realize your true identity and that’s what happened with me.”

Even as she shifted her career goals, Aduba’s classical singing training formed the foundation of what would become her disciplined approach to the craft of acting. “Opera is not something you just get up and do. It takes a discipline, a study, a vocal dexterity that is achieved through the exercise of the voice, and I think that’s applicable to acting. I think how I approach my acting is not just to wake up and do it, although there are some things that can be found in just waking up and doing things, but if I’m working on material, to really study it, and really get inside the head and the psychology of that individual and the world in which he or she inhabits. I had this amazing teacher in college who said, ‘Anyone can sing pretty, but what are you trying to say?’ ”

And so what has Aduba been trying to say with the character of Suzanne, who entered the series as comic relief, Piper’s unrequited lover and who, over the course of four seasons, has become one of television’s most heartbreakingly tragic figures, manipulated by those around her and desperate to be seen?

Suzanne Warren is just one of the many characters Orange Is the New Black has developed and enriched over the span of its four seasons. It’s not character growth so much as character deepening, like seeing a two-dimensional shape and then walking around and realizing it was a three-dimensional sculpture all along. Through flashbacks, Orange Is the New Black peels back the khaki uniform and allows us to see prisoners—so often dismissed in red-wine swirling living room political discussions as a monolith—as individuals, each sheltering their own stories.

Although its category at the Emmys has transferred from comedy to drama, that seems something of an arbitrary judgment call and not a shift in the show itself. The first season did have sad-sack Larry, Piper’s infuriating milquetoast liberal stereotype of a fiancé, but it still looked unflinchingly at drug abuse, the struggles of being transgender, the cruel caprices of the corrections officers and the day-to-day Kafkaesque nightmare that is American incarceration.

The later seasons didn’t have Larry (thank god), but it focused on the same issues, still unflinching, even as they brought us to their heightened, tragic breaking point.

“This is the first season, Season 4, where I have not watched the end,” Aduba says. “When the season came out, that experience was still very emotionally alive for me and I didn’t want to have that experience right then again, because I remember, very clearly, second for second, what each of those last three episodes felt like—and that feeling was so visceral, still, a year and however long away from it, and I was like, I don’t think I’m ready to watch that. I still haven’t watched it. I don’t know when I’ll be ready. Or if I’ll ever be.”

The most difficult aspect of watching Orange Is the New Black might be the realization that it could be any one of us behind bars, without rights and seemingly without oversight, even if you think you’re the type of person who would never, ever go to prison. While that lesson might have been most obvious right away with Piper, the privileged upper-middle-class blonde who got caught up 10 years ago with a drug-smuggling lover, it’s true of almost every single character in the series.

“Good people can make mistakes,” Aduba says. “Setting it a min security prison, you realize with most of these characters, how they got there was a minor infection—slipped on a banana peel and did something that they happened to get caught for it and you didn’t. And I think that does a great way of humanizing these characters because they’re not so far out of reach for most people.”

As for Aduba, she’s grateful for the chance to be a part of it, to get to tell a good, honest story. “This is a gift, to get to do what I want to do. I can still remember waiting in lines, whether it was for an audition before I was union, and having to wait outside the union line, waiting for all of the union people to audition and then they would let the union people in, to stuffing envelopes, to stuffing envelopes with headshots and writing letters with my resume and dropping them off all over this city.”

And now, this city is where Aduba is putting down roots. As she came to the interview, she was just finalizing buying a house to live in with her dog, Mr. Fenway Bark. “I’m just really happy,” Aduba says. “I’m like Stephen Sondheim’s Into The Woods lyric, ‘Excited and scared.’ That’s what I am.” 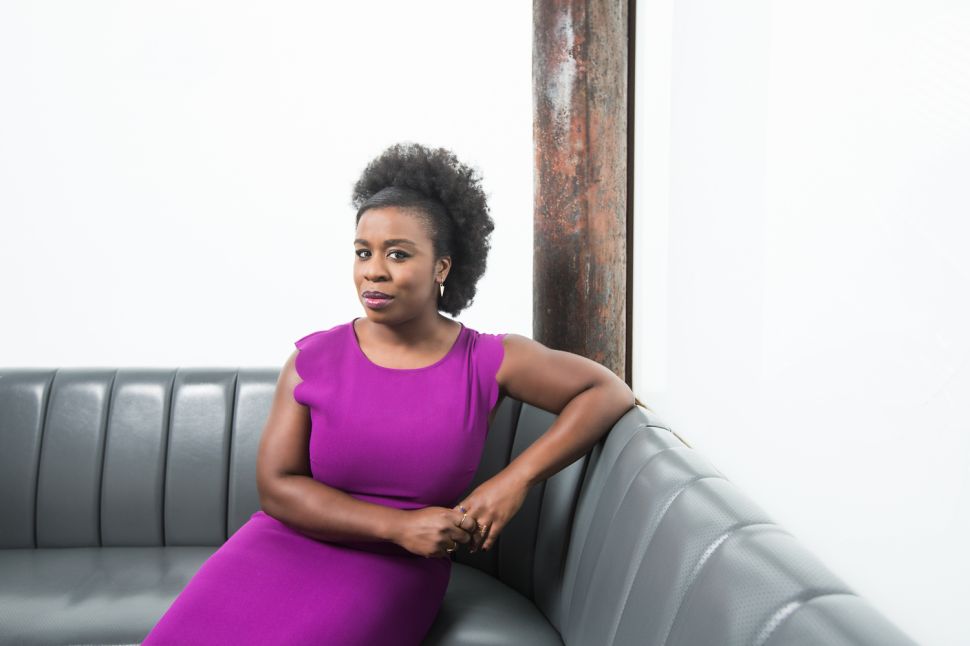