Chris Wallace’s question of Jill Stein was really a taunt.

“How many (votes) did you get?” the anchor of Fox News Sunday asked the Green Party presidential candidate.

Wallace no doubt knew that Stein got 1.7 million votes. Her total put her in fourth place, far behind the Democrat Hillary Clinton (65.2 million), the Republican Donald Trump (62.7 million) and even the Libertarian candidate Gary Johnson (4.5 million).

Although Trump lost the popular vote by 2.5 million, he won the White House due to the Electoral College system that penalizes populous states over less-populous ones.

Stein has requested recounts in Michigan, Pennsylvania and Wisconsin, three big states that helped give Trump his split decision and not the “mandate” and “landslide” he claims.

But Wallace was really trying to make the larger point of the Trumpists and the right wing: That Stein had offended them by filing for her legal rights.

So—after interrupting Stein and talking over her at length—Wallace tried to blend Stein with Clinton in a false conflation.

WALLACE: “What you are doing is exactly what Hillary Clinton said was horrifying.”

STEIN: “I don’t care what Hillary Clinton thinks about this. I care what the voters think about this. Right now, it’s not clear. Not all the votes are being counted.”

Stein specifically said 75,000 ballots in Detroit recorded no choice for president. Stein plans a news conference for Monday outside Trump Tower in Manhattan.

Later in Wallace’s unfair and unbalanced show, one of the more honest journalists on his pundit panel noted Trump’s defensiveness.

Hand me the remote…

“It’s a little mystifying to me,” Pence said, “that President Obama can reach out to a murdering dictator in Cuba in the last year and be hailed as a hero for doing it. And President-elect Donald Trump takes a courtesy call from the democratically elected leader in Taiwan and it becomes something of a controversy.”

Stelter discussed the rally in Cincinnati last week, the first stop on Trump’s Sore Winner tour (‘Live! Like you’ve always seen him before!’)

For the benefit of the easily-mystified Hoosier governor, there is a simple explanation. Trump’s phone call—a calculated insult to China—contradicted decades of American policy and angered a nation with one of the biggest economies and most powerful militaries on Earth.

Pence used the term “Obamacare” 10 times in the interview and kept repeating how Trump and the Republican Congress next year will “repeal and replace” it.

Despite lack of any Republican effort to improve health care in recent centuries, Pence said the new, Republican plan will “capture the power of the free market,” as if medical care is just another consumer product that eager Christmas shoppers can buy online or at the mall.

Another topic revealed Pence’s curious habit of visually contradicting himself. He did it again Sunday when bragging about Trump’s stunt last week to keep Carrier factory jobs in Indiana.

“Carrier is staying in the United States because Donald Trump was elected president,” Pence said.

However, while saying this, Pence shook his head from side to side, the way most people do when they mean to signal “No.” What’s up with that?

Stephanopoulos turned to Trump’s lie last week that he would have won the popular vote, too, if we didn’t count millions of votes cast illegally.

“Is it responsible,” Stephanopoulos asked, “for a President-elect to make false statements like that?”

Pence said “Well, look,” there are millions of false registrations out there.

“That’s not what he said,” the host continued.

“I don’t know that that is a false statement, George,” Pence said. “And neither do you.”

“Tempest in a teapot,” Pence said.

Referring to Trump’s job-saving stunt at the Carrier factory in Indiana last week, Todd pointed out that at least 700 employees will lose their jobs anyway.

“I know the ‘glass-is-half-empty’ tendency of many in the media,” Pence said.

Todd was quick to retort.

“It’s not about the media, sir,” Todd said. “Hitting the media is always a crutch for you guys.”

In discussing how Trump defenders say not to take his lies and double-talk too literally, Todd exclaimed: “I’m sorry, this is coming across to me as ludicrous.”

FACE THE NATION Host John Dickerson of CBS interviewed Leon Panetta, who has worked for nine presidents and has served, among other roles, as secretary of defense and director of the Central Intelligence Agency.

The subject was the kind of advice Trump might get from the scheming sycophants, the “mad-dog” generals and multi-millionaires he’s hiring for his administration.

“I suspect that a big personality like Donald Trump probably intimidates a lot of people who don’t necessarily want to look him in the eye and tell him exactly what he may not want to hear,” Panetta said.

STATE OF THE UNION Not Jake Tapper’s best show on CNN. As a follow-up to the bitter exchange at Harvard last week between the two presidential campaign staffs, Tapper interviewed managers Kellyanne Conway of the Trump campaign and Robby Mook of the Clinton campaign.

But compared to exchange of words between Conway and Jennifer Palmieri on Thursday, this one felt like a stale rehash that was not worth a full hour.

Referring to Russian hacking of the emails of the Clinton campaign and their spreading on WikiLeaks, Mook said: “It is outrageous that a foreign aggressor gets involved in our election.”

RELIABLE SOURCES Van Jones, a Democratic commentator, got it exactly wrong when he told CNN host Brian Stelter “A lot of liberals think that all of the Trump voters are part of the alt-right, neo-Nazi camp—which is not true.”

In truth, what is “not true” is that a lot of liberals say all Trump voters were fascists.

In fact, what they do know to be true is that—thanks to top Trump aide Steve Bannon and media groupies of his ilk—just enough white nationalists and Ku Klux Klan sympathizers crawled out from under their rocks to swell Trump’s vote total and make the difference between defeat and victory.

Jones then noted that “Neo-Nazis have set up camp in their (Republican) party” and that “if you point it out to them, they get mad at you—not at the neo-Nazis.”

Stelter was the only host of the major morning shows to cover what turned out to be one of the biggest stories of the day: the standoff at Standing Rock Sioux reservation in North Dakota.

By the end of the day, the federal government backed down on a proposed pipeline that offended American Indians and others by endangering that passes through sacred land.

A few hours before the decision, while showing vivid video clips, Stelter interviewed Amy Goodman of Democracy Now! about the dogs, pepper-spray and fire hoses used on demonstrators.

More than most hosts, Stelter bluntly discussed Trump’s frequent lies, in speeches and on Twitter, and how the news media should cover those lies.

“He lies so casually, so cynically,” Stelter said. “Why does he bend and flex and twist and warp and distort the truth? …His lies are different.”

One of Stelter’s guests was John Huey, the former editor of Fortune, who said Trump’s tactics are those of a demagogue because he chooses and uses scapegoats, including Mexicans, Muslims and the media.

He discussed the rally in Cincinnati last week, the first stop on Trump’s Sore Winner tour (“Live! Like you’ve always seen him before!”)

“These rallies really have the feel of shock-jock or wrestling events,” Huey said. “This is the first President-elect we’ve ever had who’s in the pro wrestling Hall of Fame.”

Sunday’s winning contestant was Republican Sarah Isgur Flores, who didn’t understand why the media gets so upset with Trump’s impulsive lies, half-baked outbursts and proud ignorance of diplomacy.

“The press needs to start catching up to the idea that he’s going to be far less meticulous in his wording,” she said, “because that’s not how real people talk to each other.” 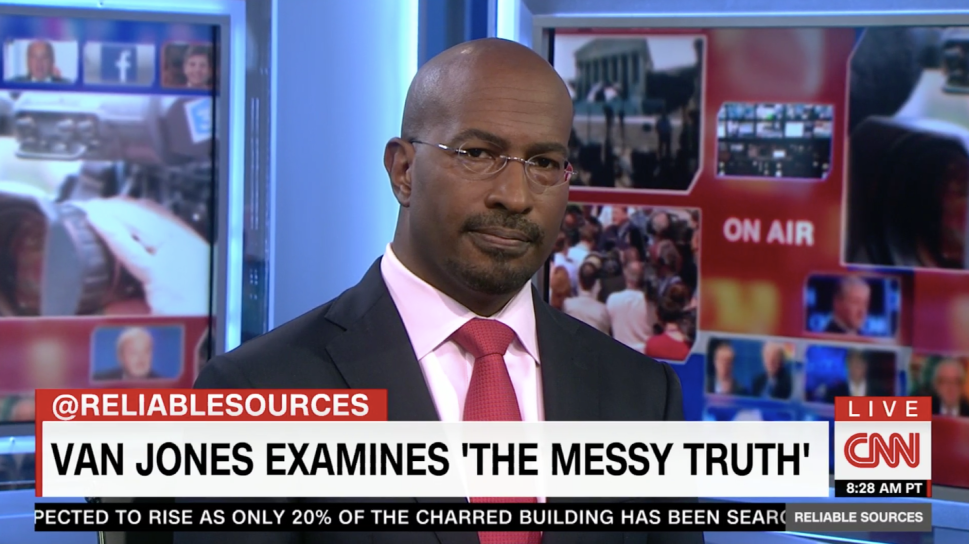