Coachella is so over. Next year, it’s all about the model festival. Last weekend, every single Victoria’s Secret Angel or Instagram-famous model was spotted on Instagram in the Bahamas. The almost A-list line-up was in town to promote the Fyre Festival, a just-announced event in Fyre Cay this spring. The “Fyre squad,” as they are apparently going to be called, showed all of the activities festival-goers could participate in, including, but not limited to, seabobbing, beachside yoga, trampolines and snorkeling. Unfortunately, you probably won’t look like Alessandra Ambrosio, Bella Hadid or Elsa Hosk in your own seabobbing photos, without adding at least two filters. Shockingly, noted modelizer Leonardo DiCaprio wasn’t spotted in his own boat, scoping out the scene through goggles.

Other models spotted on the sand included Justin Bieber’s ex-girlfriend Hailey Baldwin (one has to wonder how many other models on the island have canoodled with the Biebs), Paulina Vega, Lais Ribeiro, Rose Bertram, Gizele Oliveira and Hannah Ferguson. Each model present proved their loyalty by posting Instagram photos of themselves running through the with perfect hair, therefore fulfilling their contractual obligations and getting a little sunlight this dreary winter.

If the thought of joining a bunch of Angels and gaining more Instagram followers is simply too good to resist, consider flying out for the actual festival. While the official lineup hasn’t been announced just yet, the event promises two weekends of music, food, yachts and jet skis.

If model moments aren’t enough to inspire your next vacation, consider spending time with your favorite R&B artists…from 2002. Ashanti and Ja Rule are both part of the festival, although it’s unclear if they’ll be performing. Ja Rule is even the mastermind behind the entire event. Who knew the man behind “Mesmerize” would be the creator of the next Coachella? Maybe Fabolous will found the next Governor’s Ball. 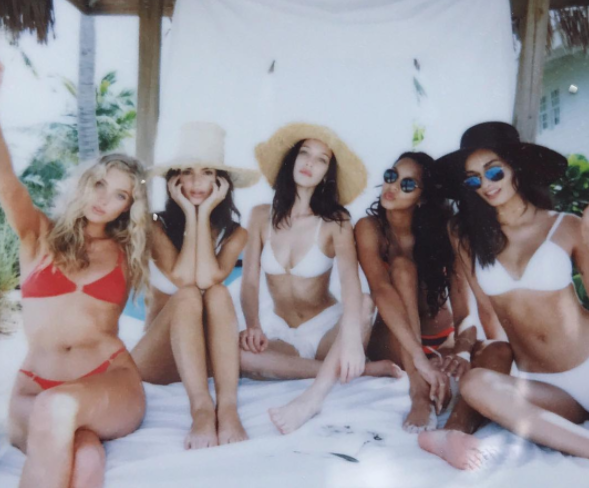