There is a fierce divide in the comics community between people who draw using pencil and paper and people who use different kinds of tablets to make artwork that doesn’t touch a piece of paper until someone prints it out. These days, basically everyone uses some level of computer retouching in their drawing process, but there are still many purists who insist on doing the lion’s share of their drawing using pencil, ink and paper. Some only do their basic line work in ink and then add heavy blacks, colors and shading later in Photoshop, but there are still artists who go so far as to do their coloring by hand.

So, when Wacom asked us to have a look at the latest version of the company’s MobileStudio Pro, we invited comic artist Evan Dahm to join us in checking out the new device. Dahm publishes all of his work for free as webcomics, but the self-described “Luddite” draws the strips by hand and insists his comics have always been intended to be seen as printed books. Dahm just announced a book deal with First Second to make Island Book, about a young girl in search of a monster. It marks the first time Dahm will let someone else publish one of his stories. We previously covered Box Brown’s cartoon history of the game Tetris, from the same imprint of Macmillan Publishers.

We met up with Dahm and the Wacom team at a Think Coffee near Washington Square Park. We turned the tablet over to Dahm while we discussed the device itself with the company’s Douglas Little..

The MobileStudio is distinct from Wacom’s more longstanding line of pen displays, the Cintiq. A Cintiq is an interactive display. Like a computer screen, it lets the user actually see an image made by the computer. It’s an interactive display so that the artist can draw on the screen and see their lines right in front of them. Cintiqs need a computer to work, however.

The MobileStudio does not need another computer (though it can be used that way). It is a whole computer, running Windows 10. The lightest device currently available in the Wacom store has a 13″ display, with an Intel Core i7 processor, 512 GB of storage and 64 GB of RAM. It costs $2,499.95.

The new device has dramatically increased its accuracy and sensitivity, according to Little. It has enough power to run any of the graphics software that artists might favor. One of its most interesting features is a 3D camera, allowing creators to capture real objects and use them as the basis for three-dimensional designs, whether that’s for making objects in digital forms, architectural elements or manufacturing designs.

Little highlighted how the device has updated what Wacom refers to as “optical bonding.” When creators use a Cintiq or a MobileStudio, the tip of the stylus touches a different place than where the line appears because there is a gap between the glass users touch and the LCD. This difference is visible from the perspective of the drawing above, but the gap doesn’t look nearly so stark from the perspective of the person holding the pen. Dahm said that he’d been bothered by that gap when trying out Cintiqs in the past, but “I do not see that here,” he told us.

“It does have the feel like you are actually on the paper,” Dahm said.

Wacom pens can track much more than where the pen touches the tablet. “Our pens record X and Y axis, pressure, rotation and tilt,” Little explained. These allow artists to create different effects. Imagine, for example, a brush tool that makes concentrated color at the center but fades out at the edges. Tracking rotation allows the artist to make swirling effects with their line.

SEE ALSO: Webcomic artists’ strategies have changed with the internet.

As we were discussing the pen’s interaction with the screen, Dahm discovered that he could move the page with his figners, spin it around and zoom in and out. “I love that you can use your hands on it,” he said. Little added that it often takes artists a few days of work to become familiar with how to make the software do what they want, “but that’s when you hit a wall and say, ‘This is really cool,'” he said.

Dahm made the test drawings seen to the left. He tried different tools and made objects or creatures that the tools suggested. You can see everything from scribbles, to figures, to structures to ambiguous experiments with volume.

Still, Dahm said he still prefers the messiness of paper. The random, emergent effects that can be created by a real pen’s interaction with a material that is, at a microscopic level, lots of tiny fibers. “In order to introduce that messiness” into an all-digital process, Dahm said, “it’s another step.”

One of the devices selling points, from the Wacom’s perspective, was that an artist cannot really make a mistake. Everything is completely fixable. Dahm seemed to feel that the mistakes themselves are part of his process.

As a full time cartoonist, he completes about two pages per week, working from his home office in Brooklyn. While he usually has a couple projects going at the same time, he’s halfway through his third book of his four volume storyline, Vattu. He gives away his comics for free online. “I would have no audience if I didn’t do that,” he told us. Though just under 300 fans support his work on Patreon, he makes his living primarily off of book sales.

“The book is the ultimate format and the way I am most proud of presenting the story,” he said.

Dahm makes epic comics. His first graphic novel, Rice Boy, ran to 460 pages. That’s a lot of scanning. Dahm doesn’t use a large format scanner, either, so he has to scan each page in parts and stitch them back together in Photoshop, but he says he has those chores so ingrained into his process at this point that he hardly notices it. He does his coloring digitally, but even after trying out Wacom’s latest version with the improved paper simulation, Dahm can’t see himself switching to an all digital process.

“I would have to change how I think too much,” he said. 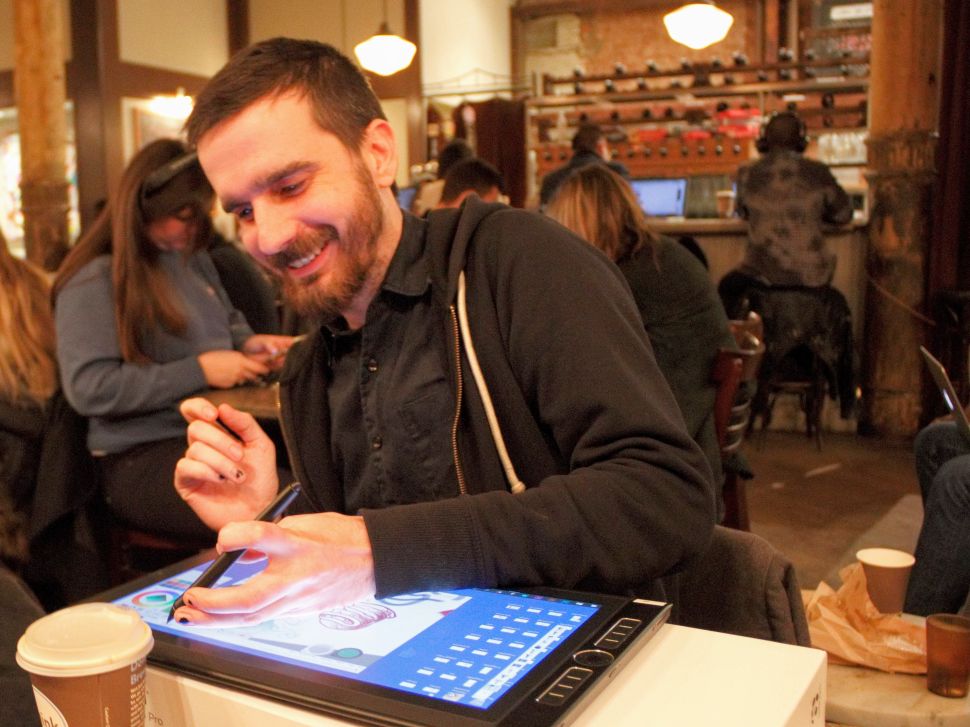