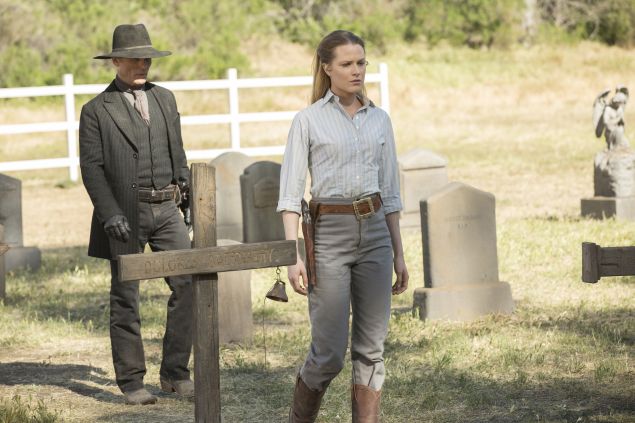 Ed Harris as The Man in Black and Evan Rachel Wood as Dolores. John P. Johnson/HBO

Hey, show of hands, who is still a little confused about HBO’s Westworld, even heading into the season one finale, “The Bicameral Mind”? Did you raise your hand? Well, first of all, I made you do that. You poor thing, stuck in your loop. Free will is a lie.

But also, you’re not alone! Jonathan Nolan and Lisa Joy have crafted a narrative so complex, confusing and, occasionally, outright deceitful that it’s impossible to peel back a layer without revealing roughly 15 new sets of moving, mechanical parts. So, just as a warning, this isn’t an “explainer,” or a “guide” to Westworld. Think of it more as group therapy discussion. “Hi, my name is _______, and I have a lot of questions about robots and mazes.” Such as:

Just how many timelines are there?

Let’s focus on what we actually know. The earliest timeline is the one in which Arnold talks to Dolores (wearing her simple farmer’s daughter blue dress). The second timeline is a number of years later, after Arnold has been killed and replaced with Bernard. Logan and William arrive in the park in its early days–bullets still hurt, machines still run on cogs and wheels–and William finds his true self by falling in love with a robot and mutilating a cavalcade of confederate soldiers. It’s in this timeline that Dolores first begins to operate outside her loop–“I imagined a story where I didn’t have to be the damsel”–and switches from the blue dress to what will henceforth be referred to as her “power pants.” Dolores’ goal here, as aided by the helpful voice in her head, is to return to Escalante, the church-centered town where her original conversations with Arnold took place.

A third timeline, 30 years later, is the one in which the Man in Black recruits Lawrence, and then Teddy, on his quest to find the center of The Maze. This is also when Maeve is recruiting an army through death-by-sexfire tactics but, hoo boy, we’ll get to that later. What’s important here is that through all three timelines Dolores is, to borrow a phrase from another show’s mindfuckery, the constant. It’s also, presumably, the timeline in which Dolores finally makes it back to that Church, and comes face-to-face with the Man in Black again.

At some point, amid all this, Dolores begins to, and let me put this in scientific terms, glitch the fuck out. Mentally, she hops between timelines and loops, occasionally seeing her own corpse, or flashes of prior (and future?) violence, all the while switching between blue dress and non-damsel power pants. And, speaking of wardrobe changes….

Are William and The Man in Black the same person?

The simple answer is: Oh, yeah, definitely. But like, maaaaaaybe not?

There’s a ton of evidence to support the idea that Ed Harris’ The Man in Black is Jimmi Simpson’s William 30 years in the future. They have the same knife. The Westworld logo was different when Logan and William arrived by train. The Hosts’ bullets barely faze the MiB, while they send William flying. Both of them picked up Dolores’ errant milk can in the exact same gentlemanly manner. 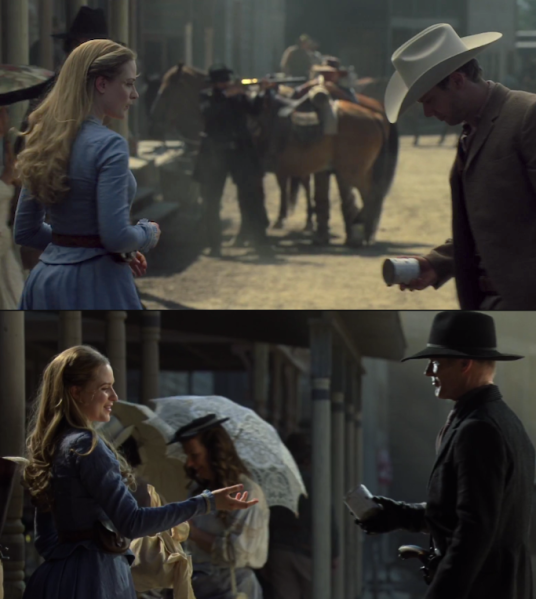 Plus, in Episode 9, “The Well-Tempered Clavier”, we basically saw what amounts to a black-hat origin story from William. Poor, kind-hearted William had his eyes opened up to the reality of Westworld, that these are machines, and you can chop off their arms and legs until the robot cows come home and it just, doesn’t, matter. That’s a lesson often espoused by the MiB, the only difference–a difference, say, 30 years experience would give you–is that he decided there has to be more than just shallow violence to the park.

William is, without a doubt, engaged to Logan’s sister. All three are connected to a massive organization that looks like it’s set to bail out Westworld. Fast forward (or not), and the Man in Black runs a massive organization. He’s a “titan of industry,” and a “philanthropist.” He’s also a father, and former husband, until his wife got sick of being married to a scary hardcore LARP-enthusiast and killed herself. Is it possible that William, once married to Logan’s sister, spent 30 years still pining for the farmer’s daughter that would forget him the second he left? Is his journey to “the center of the maze” his bid to create free-will — real free will, not an automatonic illusion — which was Arnold’s desire all along?

I mean…maybe! But, like with most Westworld theories, maybe the heck not. But there is no shortage of connective tissue between William, Dolores and The Man in Black. Such as…

This photo: What is the deal with this photo?

In “The Well-Tempered Clavier,” Logan hands a William a picture of his sister, as a sort of “hey, let’s maybe remember the soul-mate that doesn’t need an oil change” kind of gesture. But that same photo is the one dug up by Peter Abernathy, Dolores’ father, in Westworld‘s very first episode, which caused him to bug out and start spouting off the world’s most intimidating Rome and Juliet quotes. It’s interesting that, essentially, a photo of William’s wife kickstarts, well, everything.

So, how’d the photo get there? It looks aged, worn, as if it’s been buried for many, POSSIBLY 30, years. Dolores responds to it with the Host’s trademark “doesn’t look like anything to me,” but who knows what Dolores’ deal is at this point. Did William drop the photo accidentally, or did the Man in Black place it purposely? And, forgetting about William and the Man in Black for a second, what happened to Logan in all this? Remember, the Man in Black once regaled Lawrence with the story of a time he cut open a Host to reveal its inner workings, something Logan, not William, did in episode 9.

And, plus, the really important question:

How much did Logan drink in order to sleep through the horrific sounds of William slaughtering an entire crew of robot cowboys, presumably as they screamed for help throughout the night?

The simple answer is: Haha, dude, so much.

At first, this was pretty basic. Robert Ford uploaded an actual backstory into Teddy’s head, in an attempt to give Teddy an origin more substantial than derp derp Dolores *killed by tourist*. Central to this particular narrative is a villain named Wyatt, Teddy’s former sergeant in the army, who came back from the desert with “some strange ideas.” The idea to murder literally everyone with a big scary gun is, to Teddy, a “strange idea.”

(Also worth pointing out that, in any scenario, Wyatt commands a cult-like group of horn-wearing forest cannibals that look uncannily like Monty Python characters, but are still somehow terrifying)

Since then, things have gotten…murkier. The setting of Wyatt’s original rampage has since been revealed as Escalante, which at some point was been buried in sand. Not sure what the deal with the sand is but that is so low on my list. Also, Teddy admitted to the Man in Black that he was less “horrified onlooker” and more “active participant” in the slaughter. “He told me he needed me,” Teddy says. “I couldn’t resist. It was like the devil himself had taken control of me.” Which sounds a lot like what happens when a human controls a Host.

Complicating matters, as she so often does, is Dolores. In her many mental trips between timelines, Dolores has a vision of herself gunning down all the Hosts in Escalante, in a near-identical rampage to Wyatt. Related: Blonde Wyatt-following Host that is apprently named Angela tells Teddy “You’ll find him where you saw him last.” The answer to that is, Escalante. And guess who, in that timeline, is in Escalante?

So, is Dolores Wyatt? Is Teddy? Are they both Wyatt? Are neither Wyatt? Do these all count as separate questions? Hard to say!

I don’t know if Maeve is Wyatt, but Maeve is definitely up to some Wyatt-ass shenanigans.

Maeve, former mother slash former brothel madame slash current robot revolutionary, has been given the ability to control other Hosts. This, of course, seems unnecessary considering she convinced Hector to join her cause not through mind-control, but by lighting his tent on fire and having sex until they both died. Either way, robot army has a new member! A charred, burnt member, but a member all the same.

There’s definitely something weird about all this, though, flame-fucking aside. Sure, Maeve has the power to control Hosts, but doesn’t, like, every other person working at Westworld? Is the finale going to be a full hour of Maeve telling a Host to “do this,” and then a Westworld tech being like, “No, do this,” over and over until the credits roll? Presumably not, although for the record I’d support that.

But, no, with Westworld already confirmed for a season two and with all of season one’s mysteries (presumably) winding down, I think there’s much more to Maeve’s story than we think. Much more to all of this, maybe…

For most of Westworld‘s first season, our boy Robbie Ford has been hyping up his new narrative. He’s thrown hundreds of established loops into chaos to create it, bulldozed countless miles of park space to support it, and even had his best robo-pal Bernard shoot himself in the head to stop being a distraction from it. In short, Robert Ford has put in slightly more work than HBO did to convince people Jon Snow was really dead. Whatever this narrative is, it’s huge.

And, low-key, I think it’s the most important part of the show; hidden in the background the entire time but constantly interfering. When Ford first mentioned it, in Episode 2, “Chestnut”, some nifty camera work suggested it would revolve around the church in Escalante…the same church at the center of Dolores’ story, of Teddy’s story, of the Man in Black / William’s story.

Is there ANY chance that everything, all of it, every loop and glitch and fly-swatted face, is Ford’s grand plan? After all, one of the major themes of Westworld has been the illusion of self-control. How appropriate would it be if we’d spent this time watching a complex web of mysteries and theories being built, of characters traversing not only miles but time itself, only to learn it’s been orchestrated by a single man. Would that make us Hosts? Are we Hosts? Recall what Ford said to Theresa Cullen, right before he had Bernard smash her head against a wall: “Like I said, I built all of this.” Are we about to get head-smashed?

It’s possible. But, to be fair — and this is why I avoided calling this a guide — Westworld has proven anything is possible. We are but robots, stuck in a Sunday-to-Sunday loop, taking our data as it’s coded into our brains. Any more questions?

Do you think Elsie is okay? 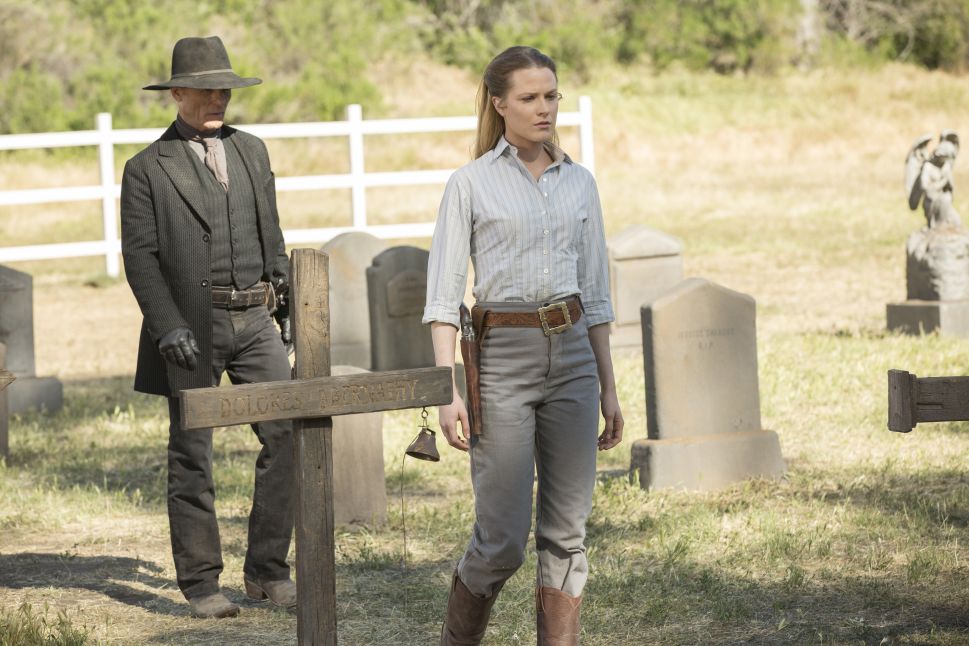