With Sex and the City 3 on the horizon, it’s obvious everyone is looking for a little inspiration from Carrie Bradshaw. Even though SATC ended ages ago, everyone seems to be seeking guidance from Carrie, whether it’s how she would swipe on Tinder or what she would be like on a rock tour (insufferable, obviously). But the best modern-day account yet might be Carrie Dragshaw, courtesy of Dan Clay. He shares snappy, “I couldn’t help but wonder” captions and wears her most iconic dresses with aplomb. In fact, his Instagram is even Sarah Jessica Parker approved. SJP has liked and commented on her favorite photos.

The Observer chatted with the Wharton graduate to find out how he channels his alter-ego, Carrie Dragshaw, and what he’s learned from re-creating her best costumes in New York City and sharing them on Instagram. If you couldn’t help but wonder what Carrie would look like as a drag queen, this is the account for you.

How much do you and Carrie Bradshaw have in common? We both spend way too much money on shoes, overanalyze almost everything, have really solid friendships, love the glittery side of New York nightlife, stayed single longer than average and, perhaps most coincidentally, I live about three blocks down from the apartment they used on the show so I pass it every time I walk to the F train.

“She’s wrestling with love’s biggest questions, and not always responding in an admirable way—human flaws in fabulous shoes.”

What do you find relatable about Carrie? She’s not a role model. Sure, she has some great things to say about friendship, self-love, embracing imperfection and moving on. But she has a lot of very human flaws. She’s not always a great friend, she’s certainly not always a great girlfriend. She’s wrestling with love’s biggest questions, and not always responding in an admirable way—human flaws in fabulous shoes.

What inspired you to channel your inner Carrie? I’ve always had a desire to dress up as her for Halloween, and this year it felt right. SATC was long enough ago where it could be nostalgic rather than expected, Sarah Jessica Parker was top of my mind again because I love Divorce and I had reached a point in my life where I was confident enough to toss on a tutu. That Saturday of Halloween, before a costume party at the Boom Boom Room, my friend and I went around the West Village taking some pictures, having fun and making the most of the fact that I live three blocks down from the apartment they used on the show.

Did you expect the immediate reaction on Instagram? I posted the first picture for my friends, but I also turned off private because I had what I thought was an unrealistic fantasy that Sarah Jessica Parker might see it and have a laugh. That picture ended up getting a lot of really positive attention, getting reposted and getting a comment from SJP herself. I loved the joy it seemed to be bringing people, so I decided to keep posting with the pictures we took that day, but this time with Carrie-esque captions. One of my big hopes is that people connect to the language. Maybe the drag is just a vehicle for the message. It’s making people smile, and the world isn’t all smiles right now, so I decided to keep it up.

What’s your favorite Sex and the City episode? I didn’t have nearly the encyclopedic recollection of SATC before I started Carrie Dragshaw, but now that I watch all the episodes the way that an MFA student analyzes Eugene O’Neill, I can recall things quite clearly. My favorite episode is a less positive portrayal of Carrie. It’s where she intrudes on Natasha’s lunch in that iconic Dior newspaper dress. She is so so self-centered in this interaction. She’s an early anti-hero, before anti-heroes were everywhere. She’s confronted with the uncomfortable idea that her single-minded pursuit of love is turning her into someone she’d rather not be. It also, of course, ends in an iconic moment, with Carrie walking down the street with traffic going by in slow motion in that Dior dress.

Did you try to re-create the moment? I tried to recreate the walk for a video, but I was in these towering Jimmy Choo heels and I’m not nearly graceful enough walking in heels to make the video look good. A woman passed by with her kids and I said a friendly hello, she did too and kept walking. But she came back and said, ‘I think you’re beautiful and whatever you’re doing is wonderful and, especially now. We all have to support each other and love each other.’ It was a remarkably tender, open moment to have on the sidewalk of New York. I was standing there in this hip-hugging newspaper dress in six inch Jimmy Choos and almost teared up.

Favorite Sex and the City quote? “Maybe some women aren’t meant to be tamed. Maybe they just need to run free until they find someone just as wild to run with them.” It has this classic SATC extended metaphor of the horse—earlier in the episode, Charlotte falls off a horse and gets back on and then ultimately gallops through Central Park. The metaphor would be absurd and silly in less capable hands, but in Sarah Jessica Parker’s, it becomes memorable and inspiring. This quote is, more than anything else, what I structurally base my captions on.

What do you love about that scene? The Plaza, that Dior dress, that hair flip, head turn at the end. You really can’t separate SATC quotes from their visual cues, and this one has it all. The moment is also so absurd. Natasha is sitting in the car while all the drama is happening…imagine waiting in the car after your engagement party while your fiancé has a tender moment with his ex-girlfriend.

What kind of comments do you get when you walk around the city as Carrie? I get incredibly nervous going out in drag, but I have to overcome that anxiety or else it will completely show in the picture, and I won’t get the shot, and then I’ll have to be out in drag for even longer. But my anxiety has been all of my own making, because people have been incredible. I’m 6’1″ in six inch heels and pretty wild outfits. I live in the West Village and people really do just go about their business. New Yorkers really don’t care what you’re doing, as long as you’re not blocking the sidewalk. When I’m near more tourist-heavy areas, there’s definitely more attention.

In old westerns, the cowboy always saves the damsel in distress. But what if the cowboy is the reason she’s distressed in the first place? Who will save the damsel when her hero is her downfall? As I was face-to-face with yet another failure on the wild frontier of love, I couldn’t help but wonder: Maybe this was the story of the damsel who learned to save herself. After all, this is not the Old West—this is New York. And there’s plenty of giddy up left in my honky tonk. Maybe some girls aren’t meant to ride into the sunset. Maybe they're meant to grab their other damsels and dance under the moonlight. #CarrieDragshaw

What are some moments that stood out? The first was at the Plaza on a Saturday. I was so, so nervous to be in such a busy area in drag. And as we’re taking the pictures, and I’m trying to look confident and powerful, this one woman is just standing at the fountain near us, staring. After a few minutes, she starts clapping a little bit and then tells me my dress hanger strap is hanging out. She comes up and fixes it. I instantly chilled out after our interaction, reminding myself that my fears were only in my head, and I was projecting my own insecurities onto people.

“Miranda at work. Samantha on the weekends. Charlotte when I’m visiting family. Carrie when I can’t fall asleep.”

What are some of your favorite Carrie outfits? The purple ballgown skirt with the black J’Adore Dior t-shirt. The wedding dress. The most requested outfit is from the Dolce & Gabbana fashion show when she falls, those glittery panties and that blue leopard-lined coat. The gowns are harder to find or recreate, especially with my proportions (anything that’s not in some way spandex is harder for my Midwest build to get into), but I’m going to keep trying.

What was it like getting approval from SJP? It was a very innocent feeling of pure, unadulterated joy. Sarah Jessica Parker, through her work, has brought me so much happiness for so many years. The idea that I could return even one speck of that back to her still makes me happy just thinking about it. She also said some kind words about the captions. And that meant a ton to me, because I spend a lot of time on the captions and I really do want this to be an homage, not a spoof, because it’s done with so much love and admiration.

Why do you think SATC has really maintained its relevancy? For me, it’s a combination of the style and the substance. The glitter and the grit. It makes everything aspirational but also gives every show moment this set of very memorable visual cues. All of the characters get more complicated and grow with you, giving you something to connect to as you get older. They rarely make statements, but end with “maybes…” and force you to agree to complete the thought. They might sound simple and sometimes even silly, but structurally they demand involvement, and I think that’s what makes the show so enjoyable to watch over and over again.

Be honest…which SATC character are you? Miranda at work. Samantha on the weekends. Charlotte when I’m visiting family. Carrie when I can’t fall asleep. 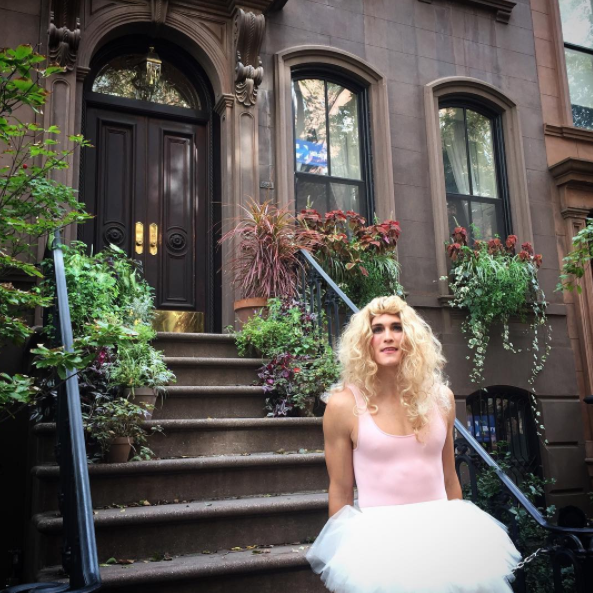