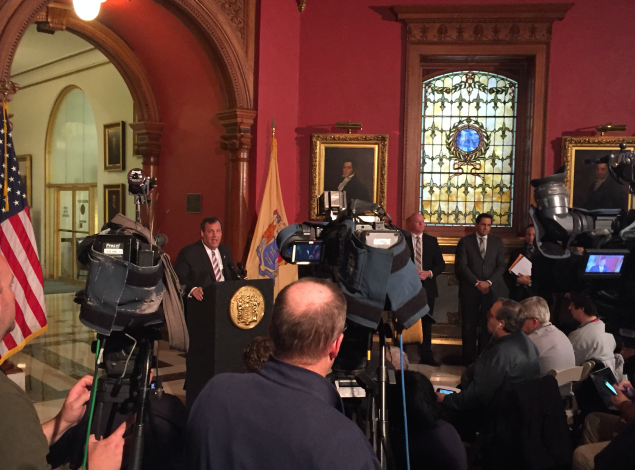 Christie announcing his plans to renovate the State House. JT Aregood for Observer

The Jersey City mayor transitioned further away from his abandoned gubernatorial bid with a successful fundraiser this week, with more than 800 people in attendance at Zeppelin Hall. New Jersey’s political commentariat has called Fulop’s future bright despite his gubernatorial campaign’s abrupt end at the hands of former Goldman Sachs executive Phil Murphy.

Deputy Chief of staff to N.J. congressman Bill Pascrell, Akhter was tapped by state Democrats to replace Hector lora on the Passaic county freeholder board. Lora resigned from the board after being named acting mayor of Passaic to replace Alex D. Blanco, who pleaded guilty to accepting $110,000 in bribes last month.

Ciattarelli made his first major move in his primary battle with Lieutenant Governor Kim Guadagno, outstripping her public criticism of Democrats’ plan to raise the minimum wage by releasing his own detailed economic plan.

NJ college students and their families

Governor Chris Christie signed a bill to offer student loan forgiveness to parental cosigners whose children pass away before paying off their state loans into law this week. The measure will also offer forgiveness to students who are permanently disabled, and deferral on payments and interest for the temporarily disabled.

Democrats in the upper house and a group of labor groups won a court case that reversed Christie’s changes to promotion rules for public workers in the state, a victory that they say will help combat nepotism. Under Christie’s 2014 statutory changes, managers were given more latitude in promoting workers without the need for external checks like mandatory scores on the civil service exam.

The frontrunner in the Democratic nominating contest to succeed Christie once he is term-limited out in 2018 sewed up crucial endorsements from county Democratic organizations in South Jersey, his one-time rival Senate President Steve Sweeney’s home turf.

Although the governor’s masterfully petty plan to renovate the State House might have put him in the winners’ column, he hit an all-time low this week when a Rutgers poll showed his approval rating at 18 percent. Along with reports from Politico and the New York Times that Christie is no longer under consideration to replace Reince Priebus as RNC chairman, Christie’s unpopularity and all-but-nonexistent chances of a cabinet position point to a future in the public sector.

Judge Bonnie Mizdol turned down the self-described citizen activist and Democratic gubernatorial hopeful’s request for a special prosecutor to investigate an official misconduct complaint filed against Christie for his role in the Bridgegate scandal.

The progressive state senator, a vocal proponent of appointing that special prosecutor, saw his bill to limit solitary confinement in N.J. prisons go down in flames with a veto from Christie. Christie called the bill, which would have disallowed the use of solitary confinement for pregnant inmates, those under 21 and others,  an “ill-informed, politically motivated press release.”