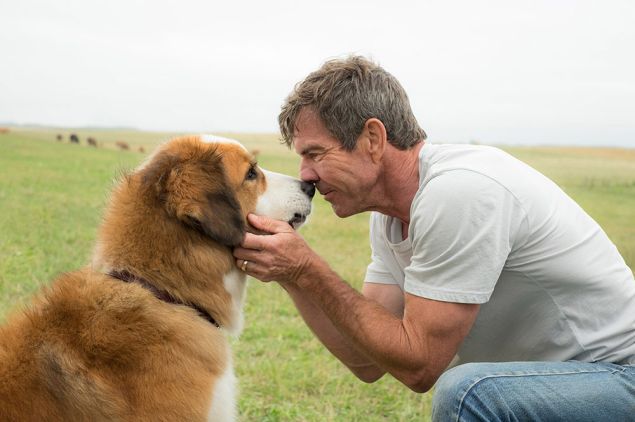 Cats might have nine lives, but dogs have even more. You’ll get to know some of them, as well as the reasons we love them in the first place, in A Dog’s Purpose. If you’re a dog lover, pet owner, animal fancier or just someone who craves a sweet, huggable and totally enchanting movie guaranteed to charm everyone with a heart from 6 to 99, then this is the movie you’ve been dreaming of. It is without question the best dog movie since Lassie Come Home.

Based on the best-selling book by W. Bruce Cameron that stayed on The New York Times best-seller list for almost a year, the screenplay (by Cameron and co-writer Cathryn Michon) and the heartfelt direction by the great Swedish-born Lasse Hallstrom literally take you into the mind and soul of a wonderful dog named Bailey, offering proof of why a dog is indeed man’s best friend. After four life spans of this dog in four different sizes, genders and breeds, you will not only want to take Bailey home to share your own life, but you will also know what the title means. A dog’s purpose is to provide unrequited loyalty and affection, supply endless joy and redefine the parameters of companionship until death do you part. No marriage can do that. According to this movie, a dog is there for its owner to the grave, and even returns in other forms to pick up where it left off. This is not a spoiler. The way a dog continues its life cycle to help others is what the movie is about. And whether you consider this premise spiritually wonky and maybe just a wee bit sentimental, trust me. What the movie says about how a dog feels and thinks and shows its true nature will melt the hardest heart.

Bailey begins as a lively red retriever puppy, homeless and unsupervised in the streets of a Midwestern city, happily frolicking in an alley with the other mutts until he is rudely whisked away to the pound by a heartless dog catcher. Before he meets the cruel fate we fear, he is rescued by a bright, lonely boy named Ethan who showers him with tolerance, even when he wrecks Ethan’s parents’ dinner party and swallows one of his Dad’s prize-winning historic gold coins.

Through the years, Bailey is Ethan’s constant companion, following him through high-school football practice, his first love with a cute classmate named Hannah, and his sorrow when his folks end up in divorce court. When tragedy strikes and Ethan’s dream of a four-year college football scholarship is ended by a fall from the roof in a house fire that leaves him crippled for life, it is Bailey who remains faithful and loyal, communicating without words but knowing just what Ethan is thinking.

A handsome young man with a big hole in his heart, Ethan reluctantly goes away to study farming and gives up his girl; Bailey, at a loss without his friends, grows old and tired, seeing his days nearing an end. When he dies, Ethan is left alone forever. But wait. Bailey comes back. He next appears as Ellie, a short-legged Welsh corgi lap dog like the ones favored by Queen Elizabeth, adored by a pair of lovers who make Ellie the center of their college years and their marriage. In his third incarnation, Bailey is a K-9 German police dog who saves a child’s life as a member of the Chicago police force but dies a noble hero in the line of duty. The fourth time around, we get a big, lovable, longhaired shaggy mutt—part longhaired retriever, part hound—who seems to be the embodiment of all three previous dogs combined. For the first time, he learns the meaning of abuse and neglect, but escapes to the countryside where he slowly remembers the lush wheat fields and the red barn from his old life.

And there, old and slightly wrinkled but still bearing the traces of the handsome young man he once was, is the farmer—now played by the sometimes under-appreciated but always reliable and trustworthy Dennis Quaid. His name is—are you ready? Ethan. And Bailey does everything in his power to prove that he is really the long, lost Bailey from Ethan’s childhood and teenage years. At last, he learns what his true purpose really is—to reunite Ethan and his long-separated Hannah, showing them the way to live happily ever after. By this time, there’s not a dry eye in the house, and the children in the audience have all been transported to a paradise only they will fully understand. A few of their elders were shattered, too—including me.

The grownups in A Dog’s Purpose are all splendid, but there’s no way around the fact that the dogs run the kennel. They even do their own stunts. Ignore the hysterical cruelty-to-animals nonsense surrounding prerelease publicity about the police dog being forced against its will to jump into the rapids to save the kidnapped child from drowning. It has all been since disproved by the film company, PETA officials and animal-rights activists. Never have I seen such a deplorable example of Kellyanne Conway’s theory of “alternate facts.” The last people you should ever trust in these matters are the critics.

In truth, the animals are so tremendous and brave they defy description, always doing what’s right for each scene. Bailey narrates the film in the offscreen voice of Josh Gad, but you won’t doubt for a minute it isn’t Bailey doing the talking, especially when he looks quizzically at the camera and observes, “Humans are complicated. They do things dogs don’t understand—like leave.” It’s a film of ups and downs, all of the ragged emotional bits and pieces held together by the dogs. They are deeply moving but also very, very funny. Tears are unavoidable, but there is nothing in the film to traumatize children.

Some cynics have sneered, dismissing it as sentimental, but it soars above the corn because of the quality of Lasse Hallstrom’s beautifully sensitive and calibrated craftsmanship. He’s shown this kind of rare insight and attention to beauty of feeling before, in films such as Chocolat and What’s Eating Gilbert Grape? But working with the beautiful four-legged wunderkinds here, he achieves new heights of compassion for dogs so natural and powerful you want to go right out and adopt one. 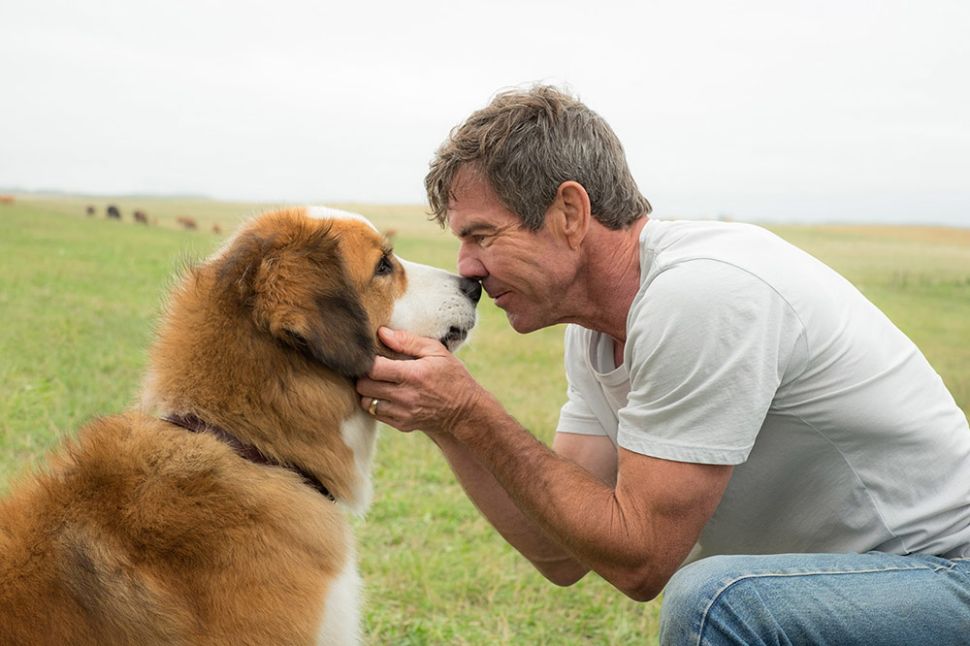