UPDATE 1/31/17, 1:28 PM: The following campaign has been revealed as a “hoax.” Stay tuned for the Observer’s followup that describes our due diligence reporting this story and how the fact that these so-called pranksters were collecting money on crowdfunding sites makes this more fraud than a “hoax.”

UPDATE 1/24/17 2:50 PM: Within hours of its Indiegogo launch, Adoptly’s campaign on the platform has been suspended for review by the Trust and Safety team. Adoptly has yet to respond to our request for comment regarding this update.

There’s a new app that’s supposed to make adopting kids quick and easy. Like most startups, it’s targeting millennials. The tagline: “Parenthood is just a swipe away.”

As its motto reveals, the app, Adoptly, is just like Tinder. You filter by your preferences (ethnicity, age, gender and distance), swipe left and right and then chat directly with children you match with. But to be clear, it’s not the company who’s dubbed it “Tinder for Adoption”—they denied it was molded after the pioneer swiping app, but the idea of swiping left on kids has the public and especially those in the adoption industry (but more on that later) feeling uneasy.

So it wasn’t a huge surprise when Kickstarter shut down the Adoptly campaign after just a few days. But now the company has relaunched on Indiegogo, and with a smaller goal. This time the team is seeking $100,000 rather than $150,000, and they told the Observer it’s because they’re in the process of closing a deal for VC.

“We feel it’s really unfair that Kickstarter would take down a legitimate idea, like Adoptly, just because some media outlets were debating its validity or felt uncomfortable with such an innovative and disruptive idea. Furthermore, we are really disappointed in Kickstarter for not reaching out to us beforehand,” co-founder Alex Nawrocki told the Observer, adding that Kickstarter suspended the campaign without an explanation or due process.

When we first heard about Adoptly last week, we reached out to people in the adoption world for insight about how viable the idea is and if it would actually speed up and simplify the process as the company claims. The reactions ranged from very skeptical to downright outraged.

‘This is a complex process, not in order to lock anybody out, but to make sure they wind up in safe permanent homes’ —Adam Pertman

Michele Fried, founder and CEO of the non-profit agency AdoptionStar, told the Observer this is “very controversial” and that the app may not even be legal in some places because of airtight state-by-state restrictions. While in some states you can advertise in newspapers, in others you can’t even reveal a child’s name until you’re pretty deep in the process. In many states, any entity facilitating adoptions must be certified. In New York, Adoptly would most likely be allowed only if the company didn’t charge a dime.

“Technically they can, but it‘s not in best interest,” she said. “We can’t endorse using this.”

Fried was concerned by the founding team’s lack of knowledge and experience with adoption (Nawrocki told the Observer they have none and are a tech think tank of four entrepreneurs who came up with several business ideas and decided to run this one). And even though parents have to have pass a background check to be on the platform, that wasn’t enough for her.

“There’s a lot more than background checks that an agency does,” Fried said. “There’s so much more involved with being approved.”

Another thing she said gives her “very serious concerns” is that the app allows prospective parents to connect directly with the children themselves. (To clarify, this is with the supervision of a case worker or similar person).

We raised this issue to Nawrocki: “What happens if there are prospective parents out there messaging 20 kids, getting their hopes up but not seriously pursuing them?”

He replied,” We can’t ultimately guarantee any of the actions taking place on the app. If a prospective parent will swipe right on a lot of options, that will be on them. We don’t think it’s a negative. We think it’s a positive. It will be happening more readily and quickly for both groups.”

Speeding up the “slow and outdated” adoption process is the aim of Adoptly. The video used on both crowdfunding campaigns begins with someone bearing a concerned look asking, “did you know on average it can take up to two years for parents to bring their kids home?”

But as Adam Pertman, founder and CEO of the National Center on Adoption and Permanency, an organization that does not place kids but rather serves as a resource and research center for agencies, said, “adoption is slow for a reason.”

He explained that what makes the process long is not finding a child who needs adopting (that’s actually often the quickest part, despite Nawrocki saying “it’s the biggest hurdle”) but everything that comes after including legal work, home studies, mandatory counseling and other steps put in place to ensure the transition is smooth and the parents are prepared.

“Remember the kids in foster care are placed there because they’re abused and neglected,” he said. “They have small and [other times] significant issues. Parents have to understand them and be trained in them. It’s not quick and simple and happily ever after…This is a complex process, not in order to lock anybody out but to make sure they wind up in safe permanent homes.”

So with this, is Adoptly even serving its purpose?

Pertman sees the app as “well intention but ill-informed” and says it “does not comport with best practice.” He’s also concerned about the commodification of the children.

“It’s not marketing. You don’t swipe left and right,” he said. “You talk to social workers and get guidance from [them]. They try to pair you with children who will be a match for your parenting skills.”

He added, “It turns the reality of foster care adoption on its head. It makes it a shopping trip where it’s a trip where you get what you want. It’s about finding parents for kids who need them, not kids for parents who want them.”

The backlash did not come as a surprise.

“Yeah, I mean we have received quite a lot of mixed responses,” Nawrocki said. “Part of that is sort of expected. We understand when you introduce any groundbreaking technology there’s this paradigm shift that creates tension and uneasiness of what it implies because it’s new and unknown. We have anticipated that.” 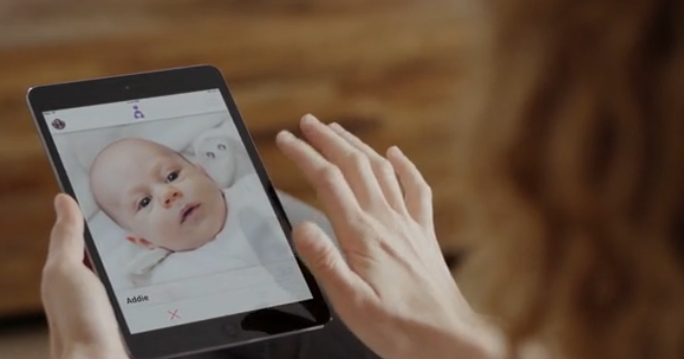