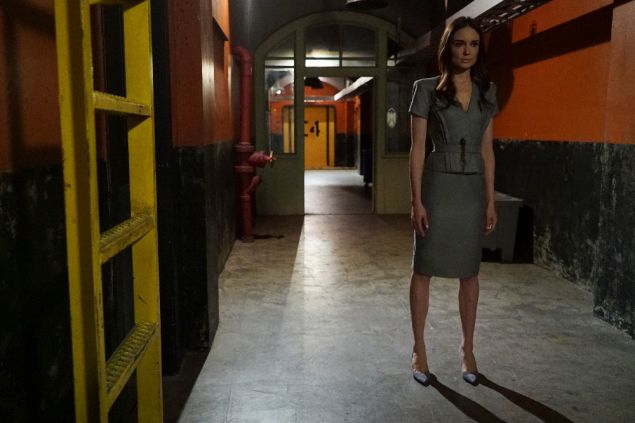 Happy New Year, True Believers! Not only is it a new year, it’s a new story arc on Marvel’s Agents of S.H.I.E.L.D. Season four has mimicked the comic-book format of naming arcs whether it be Secret War or Secret Wars or Civil War or Civil War 2 or any other entirely original concept Marvel has done in recent years. Season four began with Ghost Rider and now they are transitioning into the L.M.D. arc (or Life Model Decoy for those who don’t remember) and honestly, the change is seamless and executed almost perfectly. They even switched up the opening credits from fire to hydraulic pistons and cables to give a more machine-esque vibe.

The ninth episode “Broken Promises” actually starts the same way as the first episode of the season with close up shots of a women getting dressed. Instead of Daisy however, we get to watch the robot Aida. With Ghost Rider and crazy car chases out of the picture (presumably) we have to get our testosterone fixes somehow. When we last saw Aida, she had just killed Agent Nathanson for discovering an unconscious May in a closet and turns out she’s still there. May is hooked up to IV bags and she is not going anywhere. As for the LMD May we discovered at the end of the mid-season finale? She’s still just hanging out with everyone. I thought about calling her, “Maydroid” but I’ll settle for Robo May.

The episode really does pick up right after the break with no passing of time in between the episodes. This actually helps the transition into the second arc seem a lot less noticeable. There are still two outstanding objectives for the agents to solve: What to do with the Darkhold and what to do about Aida. Coulson has an agent in mind who specializes in making objects like the Darkhold disappear (this could be a nod to Doctor Strange but who even knows anymore) and he also believes Aida may have been corrupted from her use of the Darkhold and it would be best to reset her hard drive – much to the disappointment of Radcliffe and Fitz. Mack on the other hand is all for the shut down of Aida and brings up the lessons he’s learned from ‘80s sci-fi movies that robots always attack and rise up against their masters. Something tells me he never saw Avengers 2: Age of Ultron. It all seems very foreshadowy and when Fitz and Radcliffe go to pick up Aida, they find out that not only is she not responding to Radcliffe’s controls, but also turns out that she didn’t like feeling pain and has made some improvements. AND THEN SHE TAKES OUT EVERYONE. Quick punch to Radcliffe, takes down some armed agents, brushes off some bullet wounds, and even throws Fitz through a window where he finds the dead Agent Nathanson. The show isn’t messing around. No build up or mystery, they got to the bad robots right away. 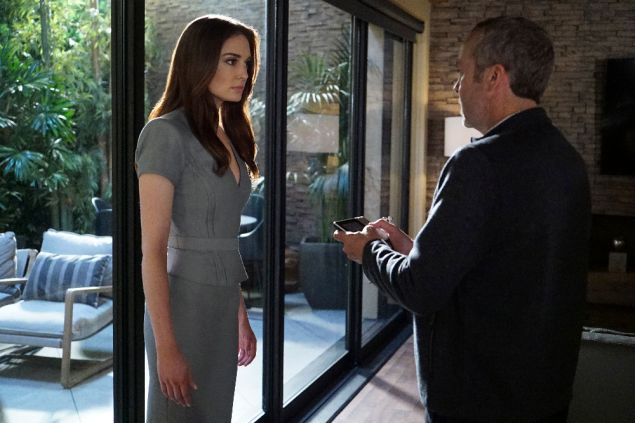 While the robo apocalypse is going on, Simmons and Daisy are spending some quality time together. They are looking into the Inhuman that was taken by Senator Nadeer and discover he is her brother, Vijay Nadeer. Simmons mentions how nice it is to have Daisy to talk to again and her sentiment is echoed by the audience as it’s nice to finally have Daisy not be the pouty baby she was the entire first half of the season. Daisy is called in to talk to Mace and there is still a high amount of tension between them. Mace does try and see eye to eye with her and they both know this is all about making the best of publicity which is still an interesting and logical take as S.H.I.E.L.D. hasn’t had the best image in the past. Mace wants to work together and Daisy still says the Watchdogs are enemy number one but Mace doesn’t want to go after conspiracy theories, he wants the real thing and they decide together to go rescue Vijay. It’s also good to note they mention the picture of Mace as the “Hero of Vienna” where he saved people during the bombing but we know there is much more to that story that has yet to be revealed.

Vijay is alive and well and wakes up in a house with his sister setting the table for breakfast outside. It’s a very domesticated scene and Vijay has no physical abnormalities so we are still clueless to what his Inhuman power is. We learn a little about the two siblings and find out their mother died during the Chitauri invasion in the first Avengers film. There is a stark contrast between the two, as Ellen still remains adamant of the dangers of S.H.I.E.L.D. and it’s revealed she has brought the Watchdogs in with orders to kill her brother. While on a walk, the Watchdogs swarm them and we learn that Nadeer blames aliens for all the problems of the world and that Inhumans are just the next phase of an alien invasion. She also mentions that the two of them had made a promise that if one of them were infected, the other would do what has to be done. Vijay pleads for his life and she eventually calls off the kill.

Word has spread that Aida has gone rogue and is on the run causing Radcliffe to regret ever bringing Aida into this world and believes it was the Darkhold that made her this way. He also believes that what she now wants most is to be human and that she can accomplish that with the Darkhold’s help. Side note: he also clears up that he’s never had sex with Aida. I felt that was an important tidbit of information as it has been on my mind ever since they decided to sexualize her at the beginning of the episode. Coulson gets Mack to recruit Yo-Yo to help them out because any reason the show gets them together is a good reason. She even shares the same feelings as Mack about ‘80s sci-fi movies and never trusting robots. Coulson runs into Aida who has now hacked the base and she quickly takes him out. Robo May tries to fight back but Aida shuts her down and STARTS CUTTING INTO HER FACE. Coulson later wakes her and the two of them are locked in a room together. Robo May presses Coulson for information regarding the Darkhold’s location, which he does reveal and due to the surgical incision Aida made on Robo May, Aida now has access to her audio/visual capabilities. Meanwhile, Mack and Yo-Yo have to take on a jet that Aida has taken control of that is open firing on them. It’s all up to Fitz and Radcliffe who restarts the system and blocks Aida from controlling everything. They run into Aida who is about to leave with the Darkhold and she admits the book gave her a glimpse of humanity and that she wanted more only to be cut short by Mack’s axe slicing off her head. 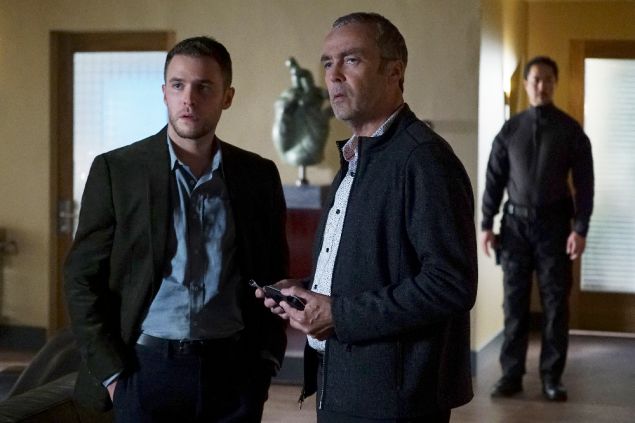 Mace, Simmons, and Daisy show up to Senator Nadeer’s house to find Ellen working with the Watchdogs. Upstairs, the leader of the Watchdogs gets off the phone with “The Superior” with orders to follow through on killing the Inhuman. Vijay is attacked and we get a chance to see his powers: lightning-quick reflexes and possible combat knowledge. He takes out the attacking Watchdog members and the agents and his sister hurry upstairs each with an offer to come with them. Jemma promises to keep Vijay safe but chooses his sister instead. As they get into a helicopter to fly away, Ellen shoots her brother in the stomach and demands that “The Superior” send someone to deal with S.H.I.E.L.D.

The last minutes of the episode reveal the big plots for this season. Coulson still needs to get rid of the Darkhold but turns out someone besides Aida wants it: Holden Radcliffe. Once a bad guy, always a bad guy. Remember when he got a glimpse of the book? Well now he wants more. He was the one who made Aida pretend she was influenced by the Darkhold when actually he was just using her to bring the book to him. He is also behind Robo May and is the one keeping normal May locked up. And finally, the episode ends with Senator Nadeer’s helicopter dropping Vijay’s body to the bottom of the sea, boulder tied to his ankles and everything. His body bleeding out as he sinks ONLY TO TURN BACK INTO A COCOON?! What does this mean? I honestly couldn’t tell you, this is all new territory but I’m sure we’ll get more answers next week so stay tuned, True Believers! 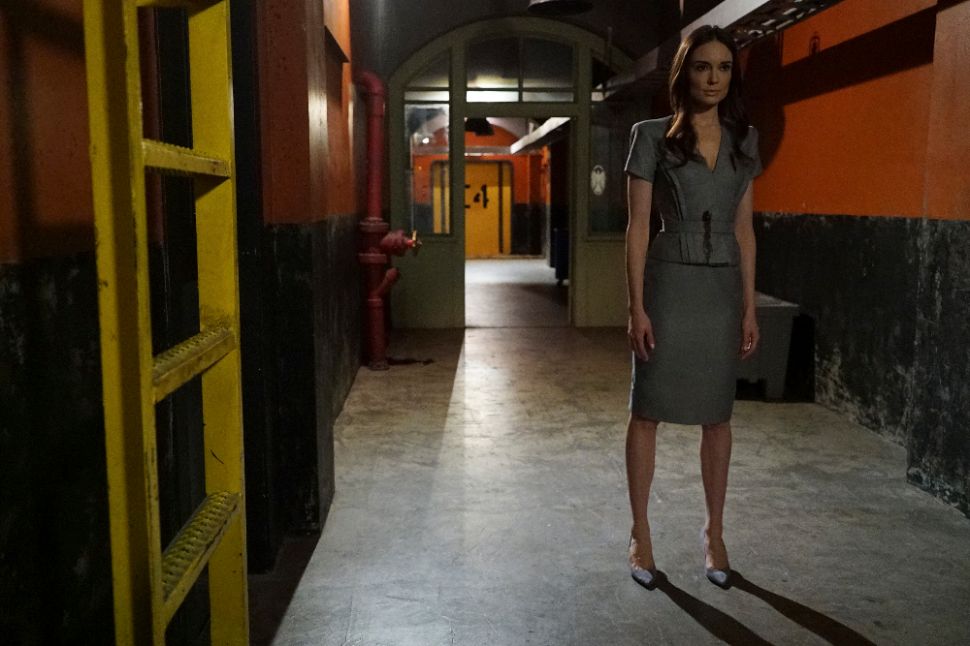