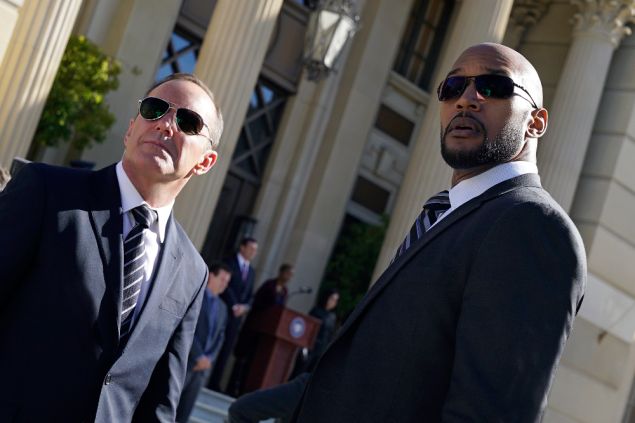 One of the first things we see when “The Patriot” starts is a “Quake will you marry me” sign and just like how the public is taking a liking to S.H.I.E.L.D. again, so should audiences as the show continues with another strong episode. With the coming of the Inhumans TV series, this could very well be the final season of S.H.I.E.L.D. but with the Ghost Rider and L.M.D. story lines, they continue to move the story and keep that plot a 9.8 CGC (That’s a really nerdy comic joke).

Director Mace starts the episode by holding a press conference celebrating the actions of Daisy Johnson as part of a continued effort to appeal to public opinion. Mack and Coulson are on surveillance and they notice that General Talbot (Yup, this is a Talbot episode (which is good (I don’t think it’s easy to sense my tone when you’re just reading this on a screen))) gives a suitcase to Mace’s second-in-command, Burrows. It’s not very subtle and you can already tell this is going to be the focus of the episode. But the ceremony is cut short by an assassination attempt. A sniper open fires and Mace is quick to block the bullet with a podium and toss it into the air as the bullet eventually explodes. Daisy manages to capture the sniper but the evacuation plan forces Coulson, Mack, Mace and Burrows (with the mystery suitcase) to board a quinjet and escape.

None of the team really knows what happened. Talbot is barking orders at Simmons and May trying to figure out what happened and Coulson, Mack and Mace are listing the enemies capable of doing this. They all agree the assassination attempt seemed sloppy and unorganized and during the sniper’s initial interrogation, they discover that was only the first part of the plan. The quinjet encounters some interference and as Burrows tries to get a signal, the emergency hatch blows off and he’s sucked into the sky (still with the mystery suitcase) and the jet prepares to crash. When Mace, Mack and Coulson come to, the pilot is dead and their communications are being jammed by former Hydra agents. Coulson and Mack believe fixing their comms and calling for backup should be their first priority but Mace wants to find Burrows first. Coulson calls out Mace for only wanting to go after Burrows because of the suitcase to which Mace replies that it’s classified (so that means yes).

Back at the base, the team has no clue where Mace, Mack and Coulson are but it’s clear all Talbot cares about is the “package” (mystery suitcase, see it really is the focus for the entire episode). Fitz and Simmons are discussing what happened with Aida. Fitz believes that if they had Simmons’ help from the start, they could have fixed whatever happened to Aida but Simmons shuts down the idea altogether after what happened to Nathanson. Robo May has a tender bonding moment with Daisy while sitting in Lola. Ming-Na Wen is doing an incredible job acting as a robot that is trying to recall memories that were never really hers. May still has the cut from the last episode on her eye and she sustains some injuries later in this episode too. Now the LMDs have no healing properties so I’m interested to see if that will ever be addressed.

Speaking of the LMDs, we finally get to see what somewhat-a-villain Holden Radcliffe is up to. Fitz has told him to stay low and not visit the base anytime soon because of the Aida/Nathanson fiasco, much to his disappointment as he can’t keep an eye on Robo May. Especially since she still has no clue she is a robot. Radcliffe has the other May hooked up to a machine that is putting her in simulations so he can collect data from her. I’m assuming all the data is then uploaded into the Robo May LMD in order to create an almost-perfect copy. She’s supposed to be at a spa in the simulation but is resisting while in the machine. Radcliffe is trying to do everything he can to solve the struggling because he does not want any more violence. She does wake up later and tries to escape only to be stopped by a powerful choke from Aida. Radcliffe sedates May but scolds Aida for resorting to violence, so for a potential villain, he really doesn’t want to hurt anyone. That being said, his condescending demeanor towards Aida can’t be leading to anything good. Also, Aida points out that the Robo May LMD is more advanced than herself – Potential jealous robot rage? Perhaps. Radcliffe understands that May is a fighter and putting her in a simulation where she can relax will have the opposite effect so he realizes she needs to have an enemy to fight for her to be at peace. 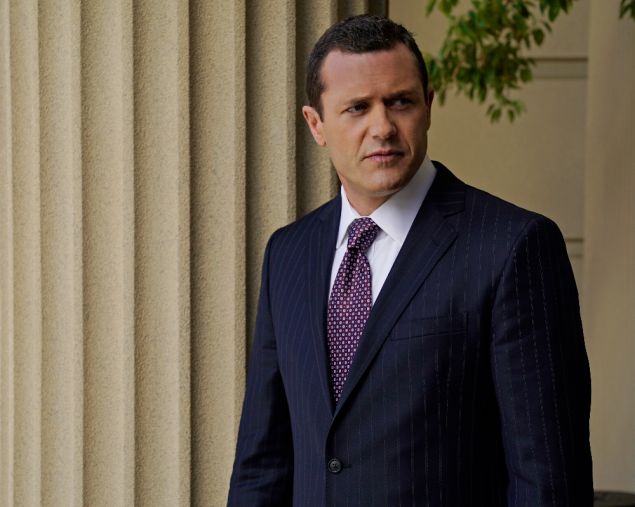 Mace, Mack and Coulson find Burrows’ body but unfortunately, the Hydra agents found it first and are now in possession of the mystery suitcase. Coulson and Mack take out some of the agents but Mace isn’t attacking any of them. In fact, he’s crouched over, sneaking around and you can see it in his face: he’s scared. He does grab the suitcase and opens it and we finally get to see what’s inside: injectors. Now the explanation of what the injectors are for comes from Talbot back at the base. With Mace missing, Jemma has more access to classified files and she discovers Project Patriot. See, Talbot wanted to make sure they had a man that was loyal to them on the inside of S.H.I.E.L.D. and when Coulson said he wanted an enhanced individual, they decided to make one. They took someone that had the potential to lead, took the serum Daisy’s father used as Mr. Hyde (minus “most of the bad stuff” as Talbot says) and created their own superhero. Mace isn’t an Inhuman and he possesses no real powers unless he injects himself with the serum. The serum which ends up being destroyed in that moment by the attacking Hydra agents as well as Mace taking a bullet to the leg. So now Hydra reinforcements have shown up and Coulson and Mack have a wounded non-superhero to take care of too.

Talbot, Robo May and Daisy are still trying to figure out where the quinjet could have crashed and the interrogation of the assassin isn’t going anywhere. Simmons has an idea and uses the severed head of Aida to scare him into talking and it works. They learn the location and May and Daisy show up to help Mack and Coulson take down the agents who they have learned were hired by the Watchdogs. We get to see Coulson’s sweet holo-shield again and Mack has a hatchet vs. hedge clippers fight that ends up including Robo May and a shovel. Robo May actually snaps her back on a saw blade during the fight and you can see that the blade actually bent. After they defeat the rest of the agents and head back to the base, May notices the cut and sees the metal underneath her skin. You know that can’t be good. 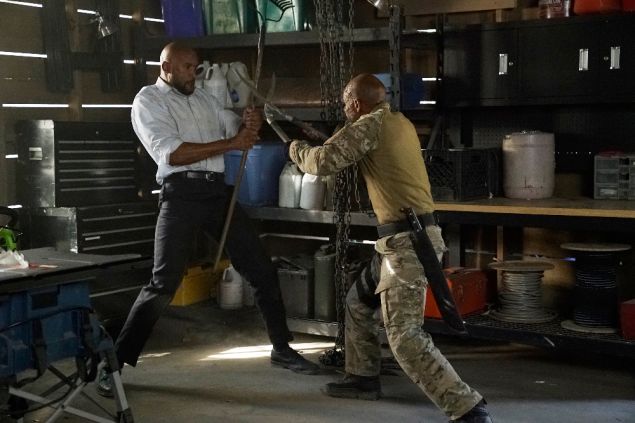 Coulson confronts Talbot about Project Patriot and Talbot doesn’t back down and claims he gave Coulson everything he could have wanted in a leader. Mace asks Talbot to leave the room so he and Coulson can talk and he reveals the day he was photographed saving people during the explosion in Vienna, he had actually just tripped. But he was seen and treated like a hero and hoped that if he became a part of Project Patriot, he could do some good and be a real hero. It’s actually a little touching. It also makes the S.H.I.E.L.D. version of Patriot more in line with the comic version, as he never had powers either. Mace tries to resign but Coulson won’t let him. He wants him to remain the face of S.H.I.E.L.D. and to handle the politics of it all but when it comes to the mission, Coulson will be in charge (!!!). The only other thing to talk about is a creepy scene where Fitz is talking to the severed head of Aida telling her that he’ll fix her and her saying thank you in return. He uploads her data into his phone and now we have two scientists secretly working on LMDs. Fun! Until next time, True Believers! 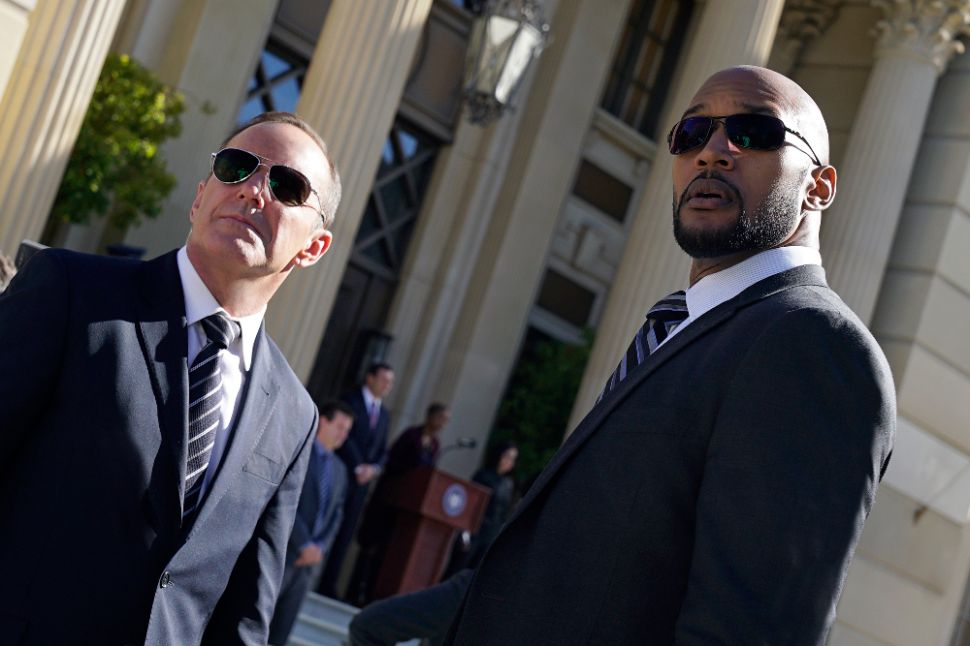