Actress Rosie Perez kicked off the demonstration against the incoming administration by introducing actor Robert De Niro, who agreed to speak at the protest just hours before it commenced. Speaking on a stage opposite the hotel, De Niro wasted no time taking swings at Trump  by announcing, “I’m very happy to be here tonight with all of you and all of my ‘overrated’ friends”—a reference to Trump’s social media attack on the actress Meryl Streep, who appeared opposite De Niro in The Deer Hunter.

The Academy Award-winner then informed the audience that he wanted to read a couple of tweets that nobody has read just yet because they will not have been written until the overnight, an obvious slight of the president-elect’s propensity to take to Twitter in the wee hours.

“’De Niro’s career is a disaster. He was passed over for Godfather 4 and Magnificent Seven. Pathetic,’” he mocked.

De Niro attacked Trump in a pre-election video produced by the “Vote Your Future” campaign in which he said that he’d like to punch the then-candidate in the face.

Documentary filmmaker Michael Moore, before cracking a few jokes, said that the first 100 days of resistance against Trump’s proposals begins tonight. He implored the protest’s attendees to go to the website 100daysofresistance.org, which states its declared mission is to obstruct the “Trump administration’s brazenly-stated agenda to overturn and destroy the gains made for more than half a century.”

Moore also urged everyone to call their Congressional and Senate leaders.

“Everybody has to commit to doing something every single day. You don’t to have to quit your job, you don’t have to drop out of school. It’s just something very small you have to do. Every day you have to contact your member of Congress or one of your two Senators. It’s takes 3 minutes—wake up, brush teeth, make coffee, contact Congress. That’s the new morning routine.”

Moore then introduced “our general, the general of the army of comedy,” Alec Baldwin, who quickly mutated into his SNL impersonation of the president-elect.

“Donald Trump, and Steve Bannon and Mike Pence and all these people part of the Trump administration they think that you are going to lay down. The one thing they don’t realize is that New Yorkers never lay down,” said Baldwin.

After recounting the story he heard on WNYC radio of an immigrant worker being arrested and detained for one year without being charged for a crime, Baldwin encouraged the ralliers to spread the message on social media and with friends to go to the IDNYC website, which enables New Yorkers 14 years and older to apply for a government-issued identification card regardless of immigration status.

The municipal identification has itself become embroiled in controversy, as two Staten Island lawmakers has sued the city and obtained an injunction to stop the de Blasio administration from going ahead with plans to blank its records—believed to contain the personal details of thousands of undocumented immigrants.

Sharpton, who usually cracks jokes during his weekly Harlem sermon, said it was time to break up the comedy hour.

“Let me say to people watching us around the world: ‘This is Donald Trump’s hometown, but the home town folk do not behave like Donald Trump.’”

De Blasio, for his part, dealt with heckling when he insisted to the crowd  there will be a peaceful transition of power.

“You will have power as well,” he told them.

Activist actor Mark Ruffalo offered strong words for those who might look to resist Trump’s presidency with physical force.

“We are a peaceful, loving resistance. We abhor violence…if you want that, then get out!” 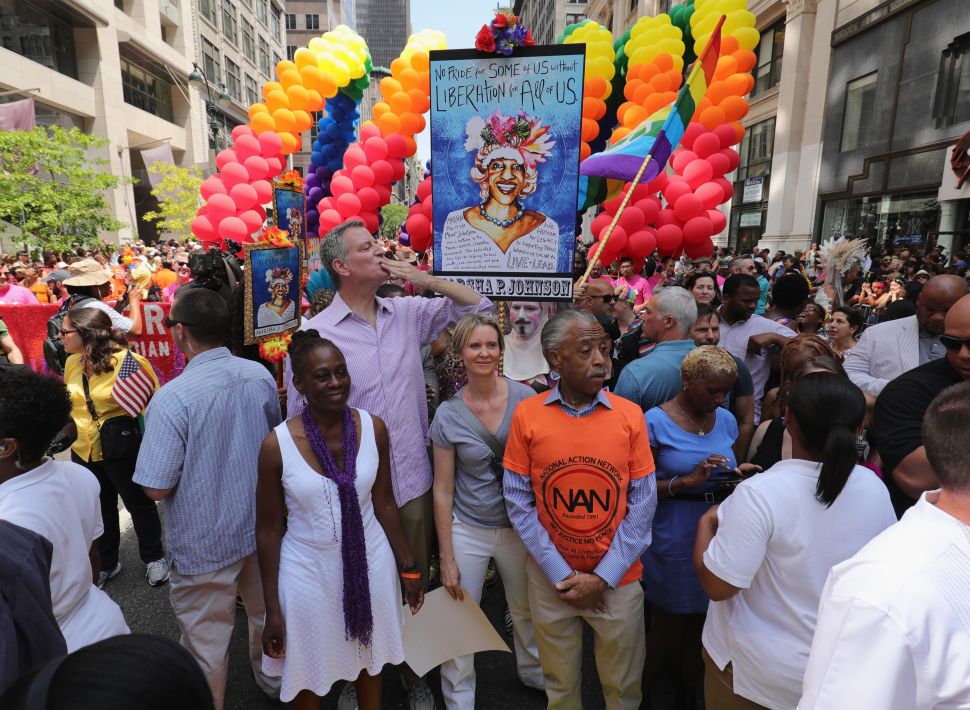