Have you neglected to purchase a 2017 planner? Or are you simply nostalgic for those day of the week undies you purchased in bulk as a kid?

Regardless of the answer, you’re bound to find Alberta Ferretti’s foray into see-now, buy-now as a charming and useful debut. The Italian designer is best known for her intricate, ethereal gowns, but she’s recently come into favor with “it” girls, thanks to the rise in popularity of her romantic floral mules. So there’s no doubt that these seven sweaters, each of which is knit with the day of the week, will become a must-have item.

As a matter of fact, the designer created this range with herself in mind. She explained to Vogue: “People who know me joke because I’m always running around and never really know what day it is. I always have a million things to do, a thousand ideas in my mind, and never enough time in the day.”

Ferretti’s first-ever capsule collection is coinciding with her 2017 pre-fall and limited edition runway show, which debuted earlier today in Milan. It’s currently men’s week in the Italian city, which goes to explain why male models like Jordan Barrett walked in the show wearing these sweaters, alongside seasoned female catwalkers, including Sasha Luss and Sara Sampaio. This also marks the first time that Ferretti has featured men on her runway.

Each of the Rainbow Week sweaters will be available to shop directly following the show, at a handful of boutiques. You could head to Ferretti’s own website, Farfetch, FWRD, Luisa Via Roma and Saks Fifth Avenue, to scoop up a sweater with your favorite day of the week.

Whether you’re a fan of hump days and can embrace a purple Wednesday sweater or lean into the Sunday scaries in a grey knit, you’ll be making a statement in these crewnecks. And who knows, maybe you could even twin with major brand supporter, Kate Moss, who starred in the brand’s fall ad campaign. 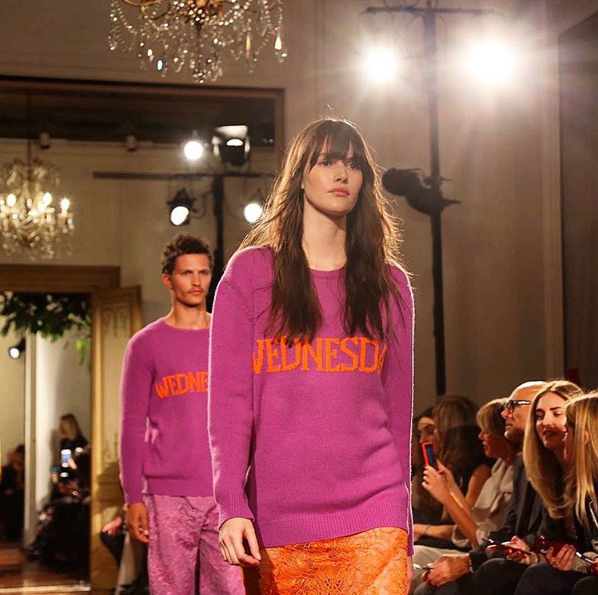