Every year, the United States National Film Preservation Board selects films to be preserved by the Library of Congress so that future generations get the opportunity to experience important milestones in the history of cinema. In 2016, the selected films included The Birds, Who Framed Roger Rabbit? and The Lion King. There’s likely less of a chance, however, of the United States government using taxpayer money to preserve exploitation titles like Fleshpot on 42nd Street and Godmonster of Indian Flats. Luckily for The Mad Love Life of a Hot Vampire, the American Genre Film Archive (AGFA) has spent the last decade rescuing some of the most glorious cinematic trash ever conceived and making them available as loans. In 2015, however, AGFA turned a corner by announcing it would be preserving notorious exploitation distributor Something Weird’s catalog, using a brand-new 4K scanner to scan the original prints and creating new prints for theatrical release. Now, AGFA has partnered with three new major exploitation film labels (Arrow Films, Severin Films, and Vinegar Syndrome) to thoroughly upgrade its catalog and its standing in the industry. To learn more about the significance of this news, as well as the importance of AGFA as a whole, we spoke to AGFA director (and Alamo Drafthouse director of genre programming and promotions) Joe Ziemba.

What made you decide to transition AGFA into becoming a distributor, in addition to an archive?

AGFA started in 2006, and it was basically started as an archive for 35mm film prints, which had a very heavy genre and obscure focus. Then, finally, we got to the point where we had all these prints and asked ourselves, “What can we do with them?” Because there are rights issues. People own the rights to the movies; you can’t just put them out or do whatever with them. You can have them available for bookings. People can get the rights [from the copyright holders] and show them in theaters and things like that. But we felt that AGFA was growing so much, we wanted to embrace that and see where it went. So it really started with the partnership with Something Weird. We had a Kickstarter with them to get a 4K film scanner to preserve their films, which was really inspiring. That whole project was a dream come true. But, from there, we noticed that Sebastian del Castillo, who’s our Head Archivist, and I were friendly with all of these labels. We loved their work, so we thought, “Why don’t we help them out and try to get their movies in front of more people?” Luckily, it was a very natural process. It was really just a matter of approaching them and saying, “Hey, you wanna do this?”

Why was upgrading to a 4K scanner such a transformative event for AGFA?

It was a big deal for us because, in terms of releasing movies, we now have the capability in-house to be a one-stop shop for all aspects of production. Sebastian has been a projectionist for 20 years, so he can inspect and clean prints, as well as scan them. We can do the color-grading, audio mastering, and all the design work in-house. All the theatrical bookings. The addition of the 4K scanner was the thing that took us over the top. We want AGFA to be the genre stopping point. Like, if you want genre movies, come to AGFA.

What made you choose to partner with Severin, Vinegar Syndrome, and Arrow, and what do you think their catalogs will add to AGFA?

For me, I think there are a handful of labels that are changing the face of home video as we know it. Lots of people think that home video is over because of streaming, but to me, when I look at the Blu-rays coming out and the amount of work going into the restorations for movies that you would never, ever expect, I think it’s another golden age for home video. Vinegar Syndrome, Severin and Arrow are amazing labels that produce great work that we admire, so it was natural for us to team up. As far as their content goes, the titles they have, it’s mind-blowing. With those three labels, basically anything they put out, I’ll watch it. It’s great to be working with them because they’re very much in sync with the spirit of AGFA, as well, with genre-focused movies you both really know, like Re-Animator, which is part of Arrow, down to one you’ve never heard of released by Vinegar Syndrome.

What are some of the ways your facility is protecting these extremely rare 35mm prints? What kind of conditions do you keep them in?

Our collection is approaching about 6,000 film elements, with prints and trailers, and it’s located in the Alamo Drafthouse projection booth in Austin. It’s climate-controlled, and everything is in all their individual cans. That’s about as good as we can do outside of getting our own compound, which is, just, a million dollars, so that probably won’t be happening anytime soon. But we do the best we can with what we have. Which is pretty good, actually.

How much restoration do you generally have to do on the films in your catalog?

The Something Weird titles, it’s pretty interesting, because Something Weird pretty much has the last film elements in existence of all these movies. So, for instance, The Zodiac Killer, which is the first one we’re releasing, is the only print in the world. Everything else is gone. There’s no negative. There’s nothing. That movie, in particular, was shot on 16mm and blown up to 35mm. Luckily, the print we have is in pretty good shape. So, for that one, it’s more about capturing what it felt like to watch that movie when it was released. We’re just doing color restoration and audio mastering on them, really getting them as clean as we can in that way, keeping it in that spirit of watching the movie in the theater when it was released. But as you know if you watch a lot of Blu-rays, the restoration work that goes on is incredible. That Female Prisoner Scorpion set that Arrow released, for example, I can’t believe how good the movies look.

What is your curation process? Do you take in pretty much anything people give you or is there a more selective process?

We have a heavy focus on genre, meaning horror, exploitation, action, hobo exploitation movies where hobos fight each other or whatever. [Laughs.] If we’re being offered something like that, we’ll likely take it sight unseen and deal with it later. If it ends up that we can’t project or scan it, then we’ll get rid of it. But a lot of people come to us with movies. Some things we won’t take if it’s not a good fit. Like if it’s some obscure Western, we probably won’t take it. Space is always an issue. Especially with the Something Weird acquisition, we’re really close to running out of space, so we have to be careful about that. But it’s pretty much, if an opportunity comes up, we’ll take that person up on it. 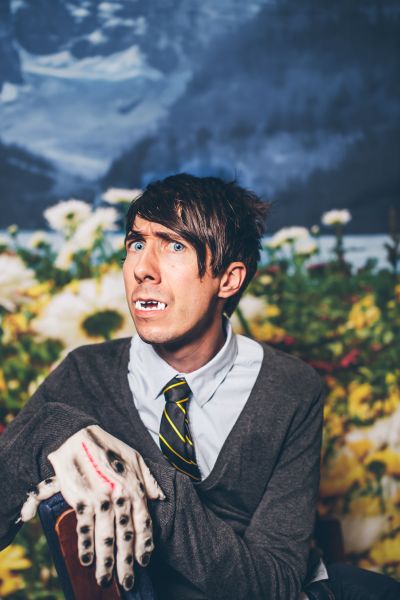 Your board members include Alamo Drafthouse founders Tim and Karrie League, as well as filmmakers like Nicholas Winding Refn and Paul Thomas Anderson, and even the RZA. What have they brought to AGFA?

They’re pals, basically. They’re friends we can lean on if we need quotes or any kind of promotional thing like that, as well as being like-minded people in the industry who are passionate about the preservation of 35mm film.

Your website describes how you’ve saved 35mm prints from landfills, incinerators, and even from the ocean.

That was the craziest story, but stuff like that happens all the time. We get calls from people who are like, “My dad was a distributor in the ’80s, and he passed away and left a whole attic full of film prints. Can you come here?” It’s very exciting when that happens.

I don’t think there are any rules about what belongs anymore. What happened with exploitation is Hollywood basically co-opted a lot of it. While people were genuinely exploiting things in ’60s, ’70s and ’80s, by the time the ’90s rolled around, Hollywood was doing the same things. But I think exploitation will be around in horror forever. I know exactly you’re talking about with the self-aware stuff, but I think for every movie that’s self-aware and not 100 percent sincere, there are five more that come out that are sincere. The thing about these movies is that they’re going to keep going, no matter what. There’s always going to be the creative drive for people to make movies on their own, to find ways to do things with no resources.

Do you have a favorite sub-genre of exploitation?

You can give me a couple.

Well, let’s see. I love rip-offs of famous American movies from other countries. What I’m really attracted to about those movies is the alternate reality aspect of them. Like, I just discovered this movie called Lady Battle Cop from 1990, which is a Japanese almost shot-for-shot rip-off of Robocop. It’s amazing. I really love shot-on-video horror. It’s something that is very near and dear to me. Black-and-white sexploitation is also something that drives me crazy. I love it so much.

What is it about a movie that is so ridiculous in its intentions or comically inept in its execution that fascinates people so much?

I think it’s the sincerity. I think you can feel it when you watch them. When movies have that, even if, at a technical level, they’re not what people would consider “correct,” if you can feel the passion behind it, this do-or-die attitude that’s like, “If I don’t make this movie about a giant nuclear sheep that terrorizes a town, I don’t know what to do with my life,” that, to me, is what comes through. Have you seen the movie Blood Freak? It’s about a guy who smokes weed and becomes a giant turkey monster and becomes born again at the end of the movie. It’s just so crazy how someone thought up the concept of this movie, then got it made and put it out and probably made a good amount of money. That’s what attracts me to these movies.