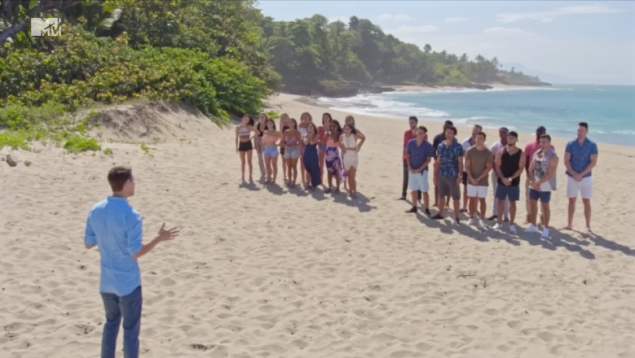 “This is a hell of a season, Sage,” host Ryan Devlin told me when we jumped on the phone to discuss the new season of Are You The One? We usually save our gossip for the finale, but after getting an early look at this premiere, I had to get him on the phone to discuss it right away. (But don’t worry, we’ll still do a postseason interview and try to solve the matches before the big reveal, like we have twice before).

The first episode of season five, premiering tonight, is titled “The Game Has Changed” for a reason. Even besides the addition of an 11th couple, there are a number of twists and turns in the premiere alone—something Ryan tells us doesn’t go away throughout the season. This is partly due to a number of surprise plot twists from the producers, and partly due to a cast he says is, more so than any cast before, “really free with their love and their bodies.”

“Honestly, the twists throughout kind of more come from the decisions the cast decide to make and how that affects the game,” he said. “We establish a lot in the first episode that you start to see play out over the season. And that’s what I think is exciting about this season. It’s AYTO? but turned up a few notches.”

During our interview, Ryan was able to shed some light on all the twists, turns and drama. He divulged which cast members to keep an eye on and even warned us of an especially crazy love triangle that keeps thing heated throughout the season.

I have to start by asking about the two additional cast members. We’re up to 22 now. Can you tell me about the decision to switch it up like that?

Season five is full of twists and turns, and it’s for two reasons. One, we’ve had five seasons. This cast that comes in has seen four other casts come in, play the game and win. They’ve learned a lot—they know more than any other cast in the history of our show. So, we have to keep them on their toes, right? But we’re also throwing some stuff in there for the fans. We’re listening to fans, we’re knowing what’s resonating with them and we’re able to put some fun things in there. So without changing the show and what makes it so great, we’re keeping it fresh. The biggest thing there is adding another couple. We have 11 guys and 11 girls—that’s more opportunity for love, but it’s more opportunity for failure and drama and stress and heartbreak, and we see all of that this season.

‘And especially with an extra guy and extra girl, it’s a pressure cooker in there. I think it’s worth keeping an eye on Gianna, Michael, Tryanny, Andre and Alicia.’

And there are other twists? Tell me about the truth booth trades.

I think this is something that’s pretty exciting. And this is something that’s brand new, and it flat out pins money versus loves. And you know every season someone comes in for the money only, and then the other people are there for the heart and the love, and that creates friction. Well we just put it right out there for them. You can either vote a couple into the truth booth or you can decide to not see that result and, in turn, have the potential to take some more money. Of course, you can never send that couple into the truth booth again. So you are giving up that information forever if you take that money. And again, it’s a little bit of a trap. Are they really here to find love and to play with their hearts, or are they here to gamble and try and win money? The truth booth trade is a perfect device to discover that. And there are other twists that are throughout, but those are a couple of the big ones in the first episode.

Will they have this option in just the first episode or all episodes?

It’s worked in throughout the season. It’s something that they’re always going to have to think about. They may not always take it, and I might not always offer it. But, it’s there throughout and, again, forces them to think about money versus love. And that’s a really interesting conversation between 22 people. 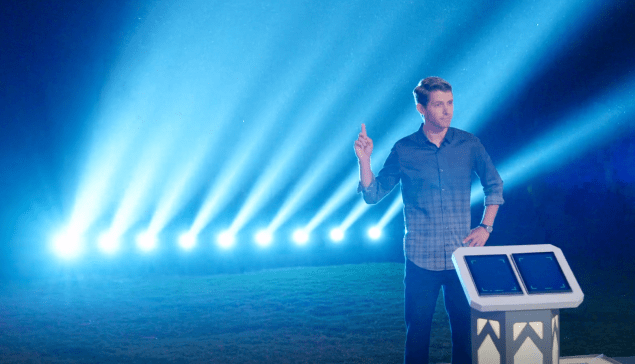 After four winning seasons, viewers have been starting to wonder if the cast will win every time. Do you think the twists, drama and addition of the extra couple are going to make us less sure they’ll get the win in season five? And you know I like to look at it mathematically, and just two more people adds so many more possible sets of matches.

Yeah, that’s exactly right. I kind of have two minds here. I like to see the cast win. It just feels good—you find your match, you win the money and unlike on any show on TV, they can all win together and there doesn’t have to be a loser. However, this cast has seen it happen before, and so we need to be able to level the playing field. It is definitely harder to add in an extra couple. What I think is interesting throughout the season is watching how they handle that and what happens when relationships are formed and broken and when strategy comes into play. It is certainly not a given that a cast wins this show. We’ve seen it in the past where it comes to a coin toss. And we don’t help them, and we don’t hurt them—we’re not able to. It’s all up to them, and if they win it it’s because they figured it out. And I think in season five we put enough new twists in there and the cast is dynamic and explosive enough where they could either work together and win this thing, or they could fall apart and not make it. Obviously I can’t say anything beyond that, but I think this season more than any other is one that every single week plays into what the final outcome is going to be, and there’s not a dull moment the entire season.

I know you can’t talk about the other twists, but can you hint at when we can expect them? Will there be one at the end, in the middle or some small ones throughout?

We’re not like springing booby traps on them like every single episode or anything like that. Honestly, the twists throughout kind of more come from the decisions the cast decide to make and how that affects the game. We establish a lot in the first episode that you start to see play out over the season. And that’s what I think is exciting about this season.’

‘There’s a lot of hooking up and switching partners. In the past there’s been more of a negative stigma about the hooking up, but this cast is like ‘screw that. We’re in paradise, our perfect matches are here and you have to try it before you buy it.”

So would you say the drama and all that makes it harder for them to win has reached new levels? From the first episode, I wasn’t getting the sense there’d be a lot of conflict this time, but then again it’s hard to get a sense from just the first episode.

Yeah, first episodes always have that sort of first-day-of-school awkwardness. You have to meet, think about your match, there’s money and you’re trying to be on your best behavior. And then usually a few days in, the gloves come off and you start to be kind of the real you. Believe me, it doesn’t take long for this cast to kind of unwind and stop putting on their best behavior. What I can say is, the connections and relationships you see, it’s what we love about this show. They go all in, and when there’s heartbreak, it’s devastating heartbreak. And when there’s love, it’s euphoric love. And when there’s drama, it’s like, bring-in-the-bodyguards-and-separate-these-people drama. And that’s throughout this entire season. And especially with an extra guy and extra girl, it’s a pressure cooker in there. I think it’s worth keeping an eye on Gianna, Michael, Tryanny, Andre and Alicia—those are a few people whose stories you might want to track throughout.

After four seasons, we’ve seen a lot of the same storylines, like a couple who is confirmed not a match who won’t give each other up, for example. Do we see all these again? Any completely new types of connection scandals?

I can say there’s a love triangle that starts up pretty early in this season, and it plays out for a long time. And there’s a lot of heartache and frustration from the rest of the house over how this particular guy is handling it. So, I think what’s interesting here is we see a lot of mixing up. More than any season, I think this cast is really free with their love and their bodies. There’s a lot of hooking up and switching partners. In the past there’s been more of a negative stigma about the hooking up, but this cast is like “screw that. We’re in paradise, our perfect matches are here and you have to try it before you buy it.” There’s just very little judgement, and we haven’t seen that before. There are people interested in multiple people and having more than one relationship, and it makes it more challenging for them. 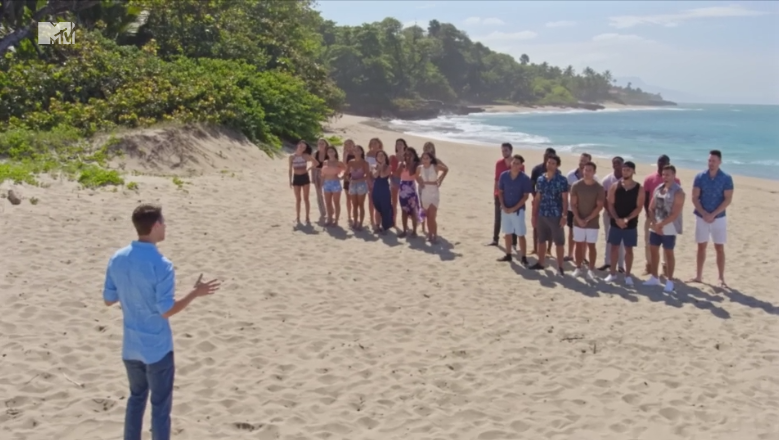