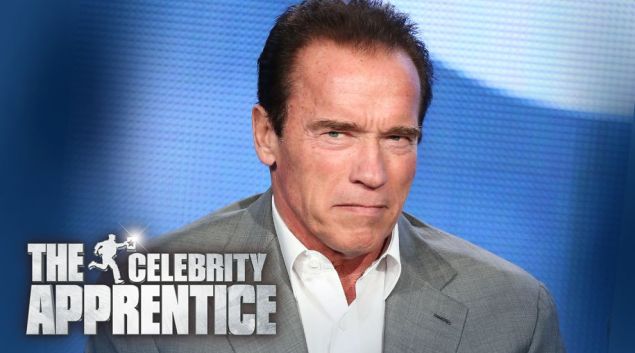 arnold schwarzenegger: new host of The Celebrity Apprentice. Via NBC

It’s where the newly elected President of the United States got his TV start. Where he first stared down workers and, if they didn’t meet his expectations, barked at them, “You’re fired!”

Now the show he helped create is moving on without him. Well, his name will remain in the opening credits, but now someone else will be doing the terminating..

The New Celebrity Apprentice pits 16 celebrities against one another as they vie to remain the last contestant standing, and to get the $250,000 prize that will then be given to their designated charity.

Schwarzenegger rose to fame first as an award-winning bodybuilder and then as the star of several films, including the Terminator franchise and various comedies.

As for Trump’s current status with the show, Schwarzenegger says, “I knew from the beginning that he was an executive producer and would have an onscreen credit. This is no different than from when I was governor and my name was on the Terminator movies.”

He chose to do the show because, “I’ve never done a show like this. It’s very challenging when you start doing something that you’ve never done before. I [picked this] because the uncertainty of it excites me.”

‘Now I’m the new boss and I want my ratings to be higher than [Trump’s] were.’ Schwarzenegger laughs as he adds, “But don’t tell him that.”

Schwarzenegger is emphatic that now that he’s taken the reigns of the series, he’s really made it his own, saying, “Now I’m the new boss and I want my ratings to be higher than [Trump’s] were.” Then he laughs as he adds, “But don’t tell him that.”Moving the series to Hollywood is a positive change in the dynamics of the show, insists Schwarzenegger, and it allows him to expose more about himself. “I asked that the show adapt to my personality. Even though the boardroom in New York was dramatic, it was kind of dark. I wanted it to be brighter. I’m an upbeat person and I have a good sense of humor. To me everything that is dramatic also has a humorous side to it. Trump was himself and I’m myself so I wanted to move the show and create a new look by putting the ‘Arnold’ spin on it.”

His previous careers – as a bodybuilder, a movie star, and a politician – have all prepared him for this job, says Schwarzenegger. “From all of that I’ve learned that you have to stay focused and put 100% of your energy in there. You have to have a vision of where you want to go.”

Explaining how he chose his advisors, Schwarzenegger says, “Patrick is my nephew and has been my lawyer for over 20 years. I talk to him about every aspect of my business. Tyra is a woman who has a highly successful company and she’s someone I respect very much. Steve Ballmer is fantastic and he is, of course, insane. And, Warren Buffett and I have been friends for a long time.”

Banks says that Schwarzenegger was great to work with and that he, “One hundred percent listened to my opinion. In fact, he demanded it and often deferred to it. It’s always amazing to collaborate with someone who values you and what you have to say.”

But not everyone involved found Schwarzenegger so welcoming.

“The first boardroom you can probably see me shaking. I was shaking like a leaf,” says contestant Nicole “Snooki” Polizzi.

Schwarzenegger says that one of his goals was to make the participants fear him. “I wanted to make sure that I intimated them at all times. As a matter of fact, I told NBC we should have everyone hooked up to heart monitors because then I could see their heart rate when they were in the boardroom,” he says with a laugh.

Polizzi admits that she found a way to handle those tense boardroom sessions. “After that first one, I requested a glass of wine to calm my nerves before each boardroom, and it helped.“

Just participating in the show was difficult for some of the celebs, including comedian Jon Lovitz. “I had no idea what I was getting into. The first task they presented what it is and then they told us all the rules, and I immediately got a massive headache. I thought, ‘what am I doing here? This is a bad decision. I shouldn’t be here.’”

But then Lovitz says he got caught up in the game. “I started to learn how to do it and I got excited for the each task and then it actually became fun, but it was also a lot of work.”

Richards says that she held out until the last minute to agree to do the series. “I actually waited until the night before we started to sign my contract because I was so scared.”

But, like Lovitz, she quickly found out that the environment suited her. “As soon as I got there I found myself abnormally competitive. I’m not normally a risk-taker in life, like you’ll never find me jumping out of a plane or anything, but with this I was like, ‘ok I can challenge myself.’”

Discussing her strategy for the completion, Polizzi admitted, “I didn’t have one. I came in wanting to learn more about myself and meet new friends. I know you’re not supposed to do that in a competition because it’s supposed to be about winning, but I kind of went in the opposite way.”

She says that she initially apologized to the other contestants telling them not to take it personally, but then, “That was like the first week. After that it was like ‘aww, ‘F’ you, I’m in this to win it.’”

While the contestants were afraid of the wrath of Schwarzenegger, he was nervous about the series for a very different reason. “I’ve never done reality TV and there’s something scary about that. No one comes in and says, ‘ok, let’s do another take,’ because then it’s not reality. So you’re sitting in the boardroom for two hours with people with big egos and you have to make this thing happen. There’s something really interesting about doing that.”

While Schwarzenegger was busy intimidating the competitors, they were still a bit taken aback by his overall demeanor, says Brooke Burke-Charvet. “I think that’s something that will surprise people — how funny and charming [Arnold] is. And, as stressful and dramatic and intense as it was, we had fun and there was a lot of laughter. There were some obnoxiously funny moments and I think that differentiates this season from those in the past.”

Schwarzenegger is quick to remember that when he first burst onto the entertainment scene years ago things were quite different for him, but he says he’s fine with that. “For a long time [people] couldn’t pronounce my name. There’s this old saying that goes, ‘if they have a hard time pronouncing your name, they’ll have a hard time forgetting It.’ I think that’s absolutely true. People don’t forget me, that’s for sure.”

He harkens back to his movies for one last thought about his time on The New Celebrity Apprentice. “Watch my movies. You’ll see that I have a very interesting smile when I kill somebody. This is what happens in the boardroom – I’ll be smiling and saying something very funny, and then I cut them. That’s it. They’re gone. But that’s how business is in real life. So this is a reality show and you really can’t get any more real than that.”

‘The New Celebrity Apprentice’ airs Mondays at 8/7c on NBC. 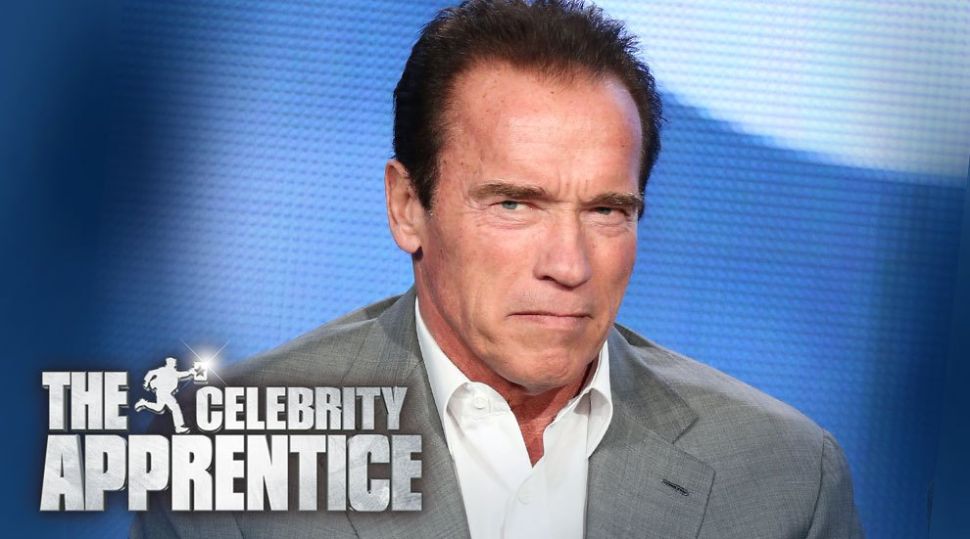