There’s always been this intimate urgency to Katie Stelmanis’ voice. When her operatic gift to hit multiple notes with a single word fuses with Austra’s icy darkwave production, warmth imposes itself on the sterile and her human prowess refuses to be buried in the mix.

Over the course of two full-length records and two EPs Stelmanis has honed that skill to maximum thematic effect, reaching a high point on 2013’s Olympia, a personal song cycle about loss and gender dynamics.

Now she’s turning that keen sense of awareness outward on an album that asks us what comes next for our society, after capitalism and and global scarcity fall away. Future Politics was written before “any of this 2016 stuff happened,” she tells me, but her thoughtful considerations sound particularly prescient now, especially her belief that the very infrastructural systems we count on to make the world turn with civility have outlasted their use.

“It’s possible for these ideas to flourish, you just have to not let them get co-opted by the evil people.”

Last year Moby told me that these systems are failing, while Emil Amos from Holy Sons arrived at a similar conclusion when we dissected the word “timelessness” to some semblance of a literal meaning. If we’re becoming hypernormalized to the 24-hour news cycle, to our technology and to our political systems, what role should our art serve? And why does it matter?

It matters, Stelmanis says, because “it’s very possible to spread cultural ideas though art and music that eventually disseminate into the mainstream.”

While unpacking the ideas that enrich Future Politics with depth and purpose like self-love, the meaning of utopia and the death of physicality, the reading list Stelmanis accumulated fast becomes a single, cohesive and optimistic vision for the future. Her radical hope manifests as this vision into “a commitment to replace the approaching dystopia. Not just hope in the future, but the idea that everyone is required to help write it, and the boundaries of what it can look like are both fascinating and endless. It’s not about ‘being political,’ it’s about reaching beyond boundaries, in every single field.”

This is the most optimistic take on the failure of our old systems ever. I’m wondering what you were reading or digesting that truly opened your head up to all of these visions.

I was reading a lot of stuff—I think I was desperately looking for stuff to read and looking for answers. I started out reading a lot of boring, more economic texts about post-capitalism and what post-capitalism could look like, then I descended into feminist sci-fi and Afrofuturism, all these dystopian and utopian books. There seemed to be this commonality between everything I was reading that really is based on the fact that your imagination is a very strong tool.

One of the books I just read, Inventing The Future: Post Capitalism in a World Without Work, by Nick Srnicek and Alex Williams, was super influential. I also read this thing called The Accelerationist Manifesto, which is a bunch of academics who wrote this book that, in some way, has a really subversive, punk vibe to it. I went to see them talk in New York pretty recently and there were 600 people there piling into the room, all these people had the book and some were getting autographs. There’s a real energy with what they’re saying that felt like more than just going to a lecture.

I hate saying the word “capitalism” because it sounds like it’s gonna be a boring conversation, but the idea of what comes after capitalism is just so exciting. [Laughs] So that’s what I like reading about.

If we’re looking to create a participatory utopia, is dance music the way?

I don’t think it’s the way, and I don’t think it’s dance music alone, but it’s very possible to spread cultural ideas though art music that disseminate eventually into the mainstream. Just like what happened in the ‘60s with the whole freedom, peace and love movement. Those ideals that the hippies embodied became what we define as Americanism, in a way. So I definitely think it’s possible for these ideas to flourish, you just have to not let them get co-opted by the evil people. [Laughs]

But have the non-evil people who are in a position of influence and community with these ideas of art and expression, are they being subverted by media or technology? I like that Rebecca Skolnik piece that you amended and added to—when she wrote that change comes from “writers, scholars, public intellectuals, social activists, and participants in social media,” you added, “artists, club scenes, parties, teenagers, ghettoes” to that list. Even in my very myopic world as an arts journalist, cultural criticism is left out of the mainstream dialogue. How does any of this ever correct itself in the future?

There isn’t really an inspiring, cool idea for what the future could look like. If there was then people would be behind it and we would be heading there. No one’s really figured it out yet, and I don’t think it’s only going to come from academics. It has to come from a wide variety of brains and a wide variety of different worlds. There has to be a major connection and dialogue between people in different countries and people all over the world. It has to be global.

That BBC documentary Hypernormalisation is all about how we’re moving toward these false narratives of art and creation because of technology. But if I may be so bold as to project, I get the feeling that this new Austra record suggests technology can also be a tool to move us in the other direction, to slow things down and infuse us with ideas and opinions.

Yeah! I fully embrace technology, I don’t identify with Luddite culture or whatever. The whole idea of The Accelerationist Manifesto is that they believe technology will be the thing to free us from capitalism. So it’ll eliminate the need for labor and eliminate scarcity.

But I think right now the problem is that technology is super inhibited because of the limitation of copyrights and media profits. So there’s no cool, new thing but the latest iPhone update, whereas in the ‘60s it was going to the moon, you know? That glory surrounding technology doesn’t exist, and there’s a real darkness around technology now. It makes people sort of miserable.

It’s been co-opted by monetary interests too, as gatekeepers.

Yeah, it definitely has.

How do we instigate the return? You’ve got this tune on the record “Gaia,” which I always understood as the name for Mother Earth, the goddess. It’s a very physical song, and I think you sing about physicality. How do we get some of that back through technology when everything is monetized and all of our data is being collected and all these evolutions feel so incremental?

To be honest, the only place that I’ve been able to learn about a future society that co-exists with nature and technology was this book called Woman on the Edge of Time by Marge Piercy, which I just finished reading recently. It’s about this Latina woman who lives in New York and is put in a mental institution, and she simultaneously starts communicating telepathically with this woman who lives in the future. The whole book is her relating the current world to the future world. It’s really good, if you ever get a chance to read it.

But they’re basically saying that the new society has to reckon with the fact that the old society was really wasteful, and everything is based on sustainability. They have crazy technology, but it’s about balance at all times. That’s the main goal. And I think that really should be the main goal—balancing human innovation with nature.

We should be so ambitious! How do we get there is the question though. I don’t know.

[Laughs] Yeah, I don’t really know either, but nobody knows.

Do you think 2016 was the year that larger narratives began to reveal themselves? The narrative of the news, of politics at large, of the arts and entertainment industry.

What was the big paradigm shift for you this year? What did you see?

Well, it’s interesting because I wrote this record before any of this 2016 stuff happened, so it’s kind of weird placing it in the context of everything that’s happening right now. I think the most shocking thing for me in the wake of all this stuff was to realize how the amount of information we’re receiving is totally chaotic. And now with fake news? Six months ago I would’ve said we were more informed than ever, and now I think it’s the complete opposite.

There’s so much information, even right now—what’s going on in Syria? I have no idea what to read to really learn about it. I’ll try, but I have no idea what an unbiased source is. And that to me is kind of terrifying. That, to me, is what’s happening in the Hypernormalisation documentary as well. It’s just chaos, total chaos.

This goes back to the idea that we have all the tools to evolve but they’re currently being used to block us. To look at Facebook nakedly as a system of algorithms, it could be used as a liberating technology, providing old contexts to inform our present. That’s what a lot of people saw happen with the Bernie campaign. But it’s interesting to me how the minute there’s a new mode or system of any kind, be it technological or economic or infrastructural, there’s usually monied interests at work.

The most important thing you can do is just change the way people think. That’s really what everyone in control is trying to do. Whoever controls the masses controls the world, and that’s why I think it’s totally possible to change the masses’ minds through cultural output. Why not? Beyoncé has way more fans than Hillary Clinton, probably. But it has to be done right.

You ask listeners if your words are being acknowledged on the album’s last song. In the future, someone with so much on her mind shouldn’t have to wonder if anyone is listening to them. There should almost be that person-to-person intuition. Once we connect all this technological blockage, can we get that intuition back with each other?

I hope so! Although people are so addicted to social media, I really don’t see that becoming the ultimate future. The young kids are already rejecting Facebook because their parents are on it. So it could be that this current acceptance of social media could be a generational thing that kind of goes away, or is replaced by something that we can’t fathom yet. So it’s definitely possible.

Austra plays Warsaw in Greenpoint on Thursday, January 26. Future Politics is out Friday. 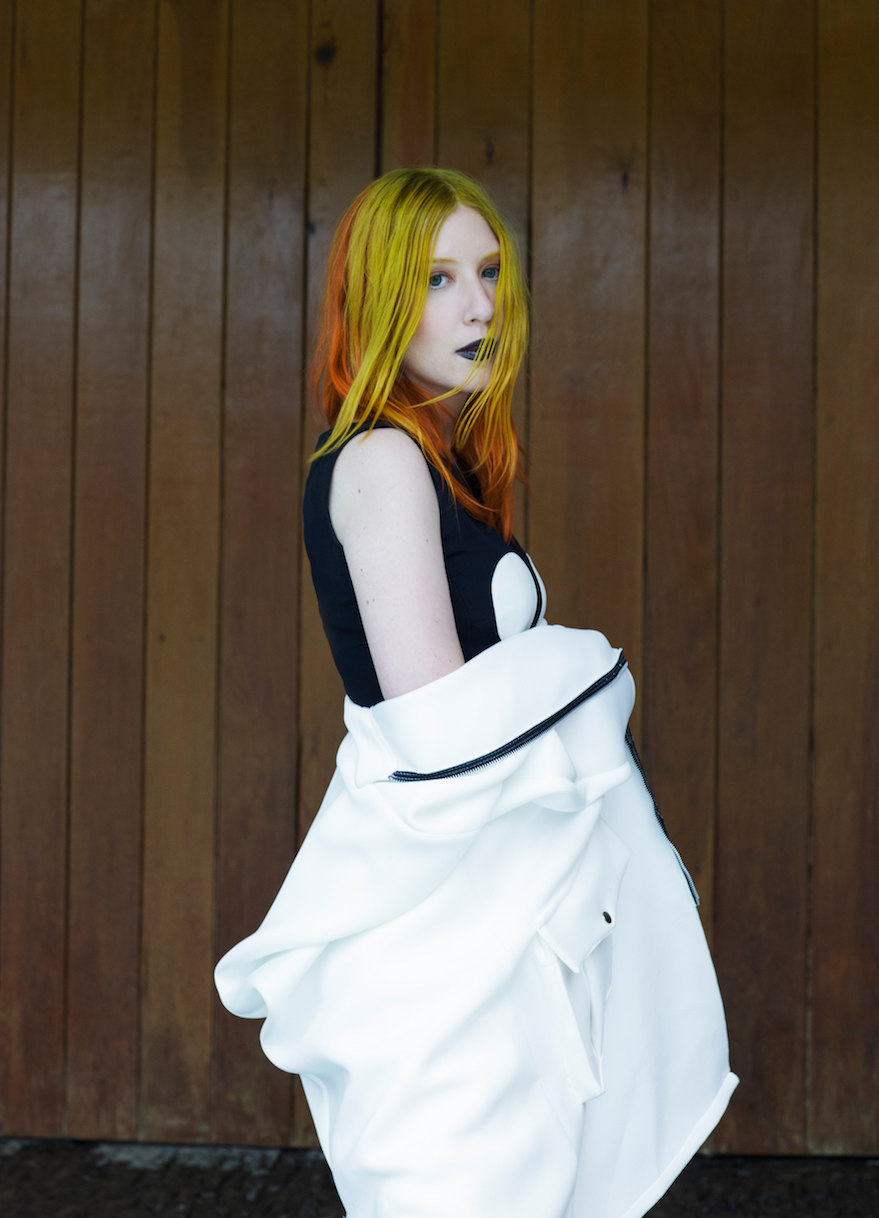