Over the last year, we’ve been talking to writers like A.G. Riddle who have been making a more than comfortable living selling e-books directly to readers on Amazon. That’s why it’s always seemed a bit strange to see media accounts reporting on the shrinking market for e-books.

News outlets like The New York Times report that e-book sales continue to slip, which is true if the data only covers part of the market. Reports from the Association of American Publishers has data from 1,200 publishers. They are the largest publishers, but they are also losing market share.

E-book sales never declined, according to a presentation yesterday at Digital Book World in New York City. In fact, if anything, we don’t yet have an adequate way to estimate how much the market segment has grown.

In back-to-back presentations from from the data site Author Earnings and publishing tech firm Overdrive, it became clear that “unit sales” may not be the best way to measure the size of the book market. In more and more ways it’s becoming clear that there are additional ways for writers to earn money than by readers buying whole books or even buying books at all.

Author Earnings makes estimates of all the sales on Amazon. “There are 20,000 unique publishers who show up in that dataset,” Author Earnings’ anonymous Data Guy said during his presentation at the conference. Amazon guards its information carefully, but Author Earnings has been able to crawl the online retail giant’s author rankings and estimate both relative and total sales of books, both print and digital. It corroborates its estimates using real sales data privately shared with the site by large authors.

Today’s presentation was based largely on the site’s report from October 2016.

Amazon e-book sales are up

It looks as though sales stuttered because traditional publishers have been losing market share to indie authors who publish directly through online platforms. Amazon is by far the largest of these platforms.

However, during this last quarter, Author Earnings observed a conversion between indie books and those traditionally published for the first time since it started keeping track.

Will that continue or was it a blip? “Because it seems to be so sensitive to discounts,” Data Guy said, “the jury’s out on that.”

Kindle Unlimited data should be included

Reports on the e-book market tend to ignore Kindle Unlimited, Amazon’s Netflix for ebooks. Amazon splits up each month’s Kindle Unlimited revenue among participating authors based on how many pages members read.

Science-fiction author Hugh Howey said that being part of the program increased his revenue so much that it was worth pulling his books from all other platforms, such as Kobo and iBooks.

Data Guy acknowledged that some industry watchers might argue that a Kindle Unlimited download isn’t really a sale, but Author Earnings takes the position that any money in a writer’s pocket counts. They came up with a way to make a roughly apples-to-apples comparisons between reads in the Kindle Unlimited pool and straight sales, he explained.

It’s easier to understand why it might look like the e-book market is shrinking if reports ignore the new ways book lovers find titles to read.

The real story: online versus offline

Amazon’s fight with the Big Five publishers has long been settled and Amazon lost. Now, Amazon has to sell e-books from these publishers at the price they dictate (called agency pricing). Jeff Bezos can’t fiddle with the cost. In the past, Amazon would sell e-books at a loss, because it helped drive Kindle device sales and keep users on their platform.

When Amazon got stuck with fixed e-book prices from the biggest authors, it toyed with print book prices, Data Guy explained. This made print more attractive to consumers. As Amazon has pulled back the throttle on print discounts, print’s growth again slowed.

“Is that why e-books started climbing again?” Data Guy asked, rhetorically, at a reprise of his talk this morning at the conference. “In fact, they never stopped growing.”

More importantly, though, Data Guy sees an overall shift in the market from storefront book sales to online. In fact, while it’s true that local book stores have shown some growth in print sales, Author Earnings show a corresponding decline that’s much larger everywhere else.

Local book stores saw a 5 percent growth in sales last year, but every other channel (such as big stores, Walmart and etc) saw a 5 percent decline. Those channels were so much larger that local stores’ growth was more than made up for by the declines everywhere else. “Perhaps 10 fold,” Data Guy said.

Let’s hear it for your favorite local shop, but the truth is that Amazon has been the one closing those new print sales.

Distribution is not even

As Data Guy started looking through different genres of books, it became clear that all segments of this market do not behave the same. Adults, overwhelmingly, have been moving to e-books, especially in fiction. Genres of fiction, too, also show extremely uneven shares of print versus digital.

On the other hand, science-fiction, romance and African-American urban fiction all disproportionately favor e-books, often to severe degrees (96 percent of urban fiction online sales are e-books). In the following slide, the bubbles represent the size of a genre’s market. The further a bubble sits to the right, the larger the portion of its sales are digital. The higher the bubble, the more sales have gone to indie publishers.

Note that this slide also includes audiobooks as well as e-books.

Data Guy pointed to a number of instances where the broader traditional publishing industry seems to be catching on to the fact that price matters. He showed several genres where, when Big Five publishers are excluded, the rest of the industry has been dropping their e-book prices. This could help explain why indie and traditional e-book sales have converged.

Self-published titles have been selling for $2.76 on average. Many writers find they earn more money at lower prices, so long as they don’t go too low. Most e-book authors the Observer has spoken to with an established following, such as Christopher Nutall, like to price their books around $3.99 or $4.99.

When patrons borrow, writers get paid

Further, more readers have learned that they can check out digital books at their local libraries to read on Kindles or mobile (mostly the latter). Libraries pay real money to provide these books, and every year both the acquisition and circulation of digital materials have shown robust growth, according to Overdrive’s David Burleigh. It saw a 21 percent increase in circulation over 2015.

Overdrive serves as the middle man between libraries and publishers of digital books.

Audiobooks have grown more quickly than e-books, but e-books remain the larger market in libraries. Forty percent of all library patrons check out both e-books and audiobooks.

“Library readers are often avid readers. They are borrowing physical books and online books,” Burleigh said. “They are getting content any way they can.”

Overdrive has also started helping libraries negotiate special deals that wouldn’t be possible in print. For example, if a library wanted to encourage all of its patrons to read just one title over a specific period (so it could organize talks and events around the title), the company can help it set up a special deal, licensing far more copies at a lower price, but for a limited period of time.

More importantly, the examples from libraries help to illustrate how digital products just aren’t the same as physical ones. This market will only get stranger, so be cautious about reports on e-books decline that don’t look at the whole market.

Author Earnings focuses on Amazon, which is by far the biggest player in U.S. online retail. It took years for it to find a way to reliably estimate total sales on the site (rather than relative sales). “One of the things that’s currently in the works is doing that for non-Amazon retailers,” Data Guy promised (such as Google Play and Kobo).

No one will ever be able to get a God-view on the entire book market, but some sources incorporate as much information as they can while others appear intent on pretending like growing segments of the market just aren’t there. 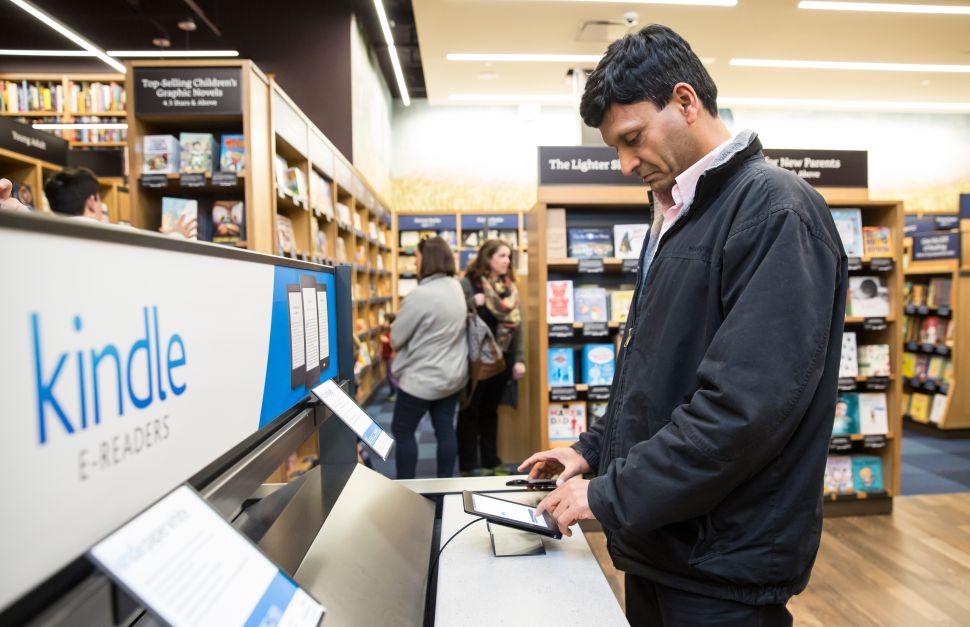