On January 28, President Trump signed an executive order denying entry for 90 days to the United States for individuals from Iraq, Iran, Syria, Yemen, Sudan, Libya and Somalia. A spokeswoman from the Department of Homeland Security told Reuters that the ban would prevent greed card holders from banned countries from returning to the United States if they travel abroad. In response to the ban, protests erupted at major airports across the country.

As opposed to being an anomaly induced by Trump’s presidency, the ban was set in motion by Barack Obama’s administration. In December 2015, Obama signed into law the Visa Waiver Improvement Program and Terrorist Travel Prevention Act, which designated Iraq, Iran, Syria, Yemen, Sudan, Libya and Somalia as areas of concern. An attorney with the American Arab Anti-Discrimination Committee, Yolanda Rondon, criticized the act for “blatant profiling on its face. Only nationals of particular countries regardless of whether they have traveled to a terrorist support country or not, have to meet additional requirements they would not otherwise have to go through if they were not Arab. It is premised on the unreliable assumption that Arabs are more prone to terrorism and to commit terrorist acts, and further perpetuates stereotypes that Arabs are terrorists.”

In January 2016, one of the victims of the ban implemented during Obama’s administration was BBC Journalist Rana Rahimpour, who was prevented from traveling to the United States because she was born in Iran.

In 2011, the State Department under Obama issued a six month ban on refugees from Iraq in response to a case in Kentucky in which two refugees were discovered to have fought U.S. soldiers in Iraq. ABC News reported that the refugee ban affected, “many who had heroically helped U.S. forces as interpreters and intelligence assets. One Iraqi who had aided American troops was assassinated before his refugee application could be processed, because of the immigration delays, two U.S. officials said. In 2011, fewer than 10,000 Iraqis were resettled as refugees in the U.S., half the number from the year before, State Department statistics show.”

While Trump’s ban provided a moment of clarity to many on the left, they widely ignore Obama’s record on foreign policy and immigration in a cultish obsession for his presidency. Under the Obama administration and Hillary Clinton’s service as Secretary of State, weapons exports to countries in the Middle East, like Saudi Arabia, exponentially increased. Those weapons have been used to commit human rights atrocities in Yemen and other Middle Eastern countries, and in some cases have fallen into the hands of terrorist groups. Weapons exports more than doubled under the Obama administration, and bombing campaigns increased to seven countries. Additionally, the Obama administration embraced the highly controversial use of drone strikes, increasingly relying on it despite the lack of oversight and accountability for the program killing civilians instead of intended targets.

Obama deported 2.5 million people between 2009 and 2015, earning him the nickname “deporter-in-chief” from immigration activists. Many sanctuary cities across the country proclaimed themselves as such in response to Obama’s immigration policies. “The sanctuary city movement gained steam largely as a rebellion against what many liberal jurisdictions viewed as intrusive immigration enforcement efforts under Obama,” reported The Huffington Post on January 7.

Democrats and their supporters are right to protest Trump’s immigration ban. But they need to also look in the mirror, because nearly all of them remained silent when the foundation for the recent ban was being built by the Obama administration. 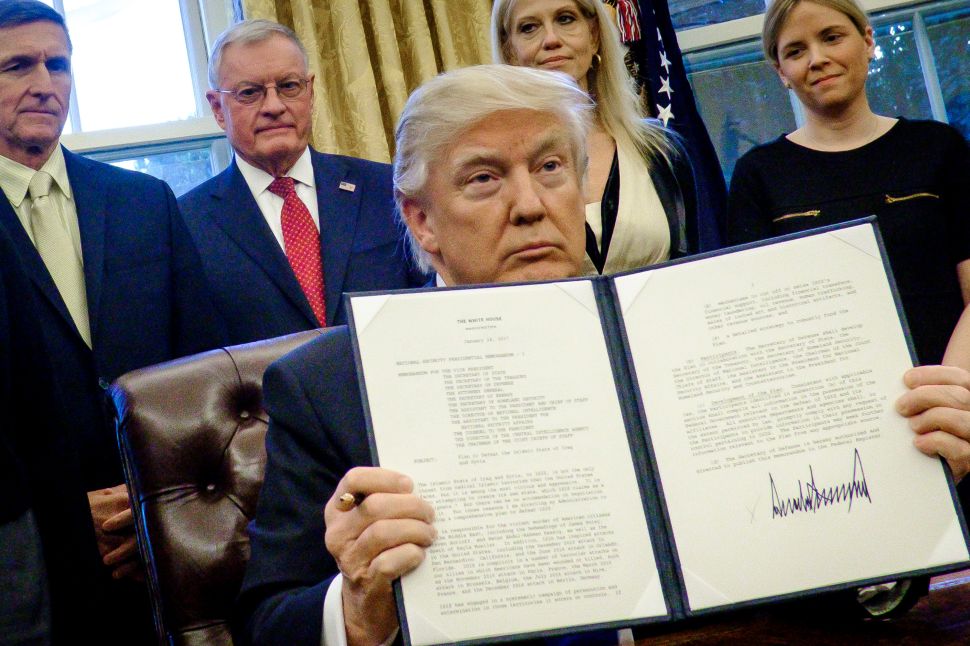