Who’s to blame for the horrible thing that happened Payton Leutner? On one level at least, the question is easy to answer, and that answer is not in dispute. The Wisconsin 12-year-old was stabbed 19 times by her friend Morgan Geyser, in collusion with her other friend Anissa Weier. The pair, who were 12 years old themselves at the time of the stabbing, currently await trial as adults for the crime.

Ask the girls themselves, however, and they’d cite an imaginary being as an unindicted co-conspirator. They were inspired to kill by a creature called Slender Man—a tall, faceless entity in a black suit and tie who’s part urban legend, part modern fairy-tale monster, part J-horror/David Lynch knockoff. Fascinated by the fictional stories, pictures, and videos of the creature they encountered online, the girls—immersed in a folie à deux reminiscent of the true crime behind Peter Jackson’s film Heavenly Creatures and any number of other lethal pairings—decided to murder their friend.

Their reasoning behind this was fuzzy and overlapping: Payton’s death would prove their worthiness to serve as Slender Man’s human “proxies,” it would prove the existence of Slender Man himself, it would protect their families from being killed in Payton’s stead. But the slipperiness of motive is appropriate. Initially created by Eric Knudsen as part of a photoshop contest to craft realistic-looking paranormal images on the Something Awful internet forum, Slender Man slipped from the grasp of his originator as easily as he can allegedly travel between his dimension and our own.

The evocative images Knudsen created spawned an entire industry of fan art, fiction, and films across a host of websites and social networks: YouTube, Tumblr, DeviantArt, the Creepypasta Wiki (a user-generated database of modern-day scary stories to tell in the dark), a wide variety of Something Awful–style forums and message boards. As Dave Gonzales demonstrates in his excellent Thrillist article on the history of the character, you can point to individual standouts amid this vast sea of Slender Man media: Knudsen’s original photoshops and their follow-ups; the genuinely frightening and innovative web series Marble Hornets from student filmmakers Joseph DeLage and Troy Wagner; the jump-scare video game Slender: The Eight Pages by programmer Mark Hadley; the spinoff character Ticci-Toby, a human “proxy” for Slender Man in the vein of Renfield’s relationship to Count Dracula, created by a pseudonymous DeviantArt user called Kastoway. Each shared certain elements—the basic look and feel of the character, its tendency to both prey on and attract children, its liminal status on the border between fact and fiction, a la the videotape from The Ring or cryptids like Mothman and Bigfoot.

But there’s no one author who told his story, no one artist who depicted every aspect of his myth. The individual contributors to the Slender Man legend can, and should, receive credit for their labor. But at root, Slender Man exists independently of all of them, spreading as an internet meme the way myths and folktales spread by word of mouth. Slender Man is art without an artist.

This paradox is central to Beware the Slenderman, filmmaker Irene Taylor Brodsky’s HBO documentary about the girls, the crime, and the creature. Brodsky’s history of Slender Man is painted in broad strokes indeed, citing Knudsen’s creation of the character but then largely treating its subsequent development as authorless. The Marble Hornets filmmakers in particular, whose aesthetic and actual work alike are utilized quite liberally throughout the film, get especially short shrift.

But the choice may well have been deliberate. In paring away the question of the external figure at fault for Slender Man’s infection of Morgan and Anissa’s minds, Brodsky is able to focus on the factors unique to the girls themselves. Lonely and friendless at a new school, Anissa’s more or less sole companion was Morgan, who was suffering from undiagnosed schizophrenia inherited from a father frightened to tell his daughter of the fate he thought awaited her far into the future. When Anissa introduced the unstable and suggestible Morgan to the Slender Man story, her delusions were given a shape—dark and faceless and violent. The attachment of her friend only reinforced the reality of the illusion for them both. Much of Beware the Slenderman’s most affecting scenes are taken directly from interrogation videos the day of the crime, in which the two girls confess to the crime without hesitation in the same breath as discussing Slender Man with all the certainty of a person looking outside and describing the weather. The creature was that real to them—as real as the stabbing itself.

In taking inspiration from disturbing art, they are hardly alone in the annals of crime. Oliver Stone’s Natural Born Killers was cited as the spark for a crime spree by Oklahoma teenagers Sarah Edmondson and Benjamin Darras that left one man dead and another woman a quadriplegic in 1995. Author John Grisham, a friend of the slain man, publicly supported a lawsuit against Stone and Time Warner, which released the film; the case was later dismissed. Rock star Marilyn Manson, whose music is played briefly in the film, was later cited (largely erroneously) as an inspiration for Columbine shooters Eric Harris and Dylan Klebold; the subsequent backlash was a major part of another documentary, Michael Moore’s Bowling for Columbine. Horror author Stephen King, whose character Pennywise from It bears some resemblance in its makeup and methods to Slender Man, withdrew his book Rage (written under the pen name Richard Bachman) after it was cited in multiple school shootings and hostage crises. In each case, the tendency to find the art young killers were consuming and treat the artists behind them as reckless at best or deliberately malicious at worst was irresistible, sometimes even to the artists themselves.

But Beware the Slenderman and the crime it chronicles removes that temptation. There is no artist behind Slender Man, not in the panoptic, memetic form in which Morgan and Anissa encountered him. Slender Man’s “author” is the internet and the army of artists and writers and filmmakers and game designers who inhabit it. Only the accident of history, in which the original posts can be tracked down, enables us to put names to the faceless being at all. A few decades ago Slender Man would just be Bloody Mary or the killer with a hook for a hand who disrupts teenagers necking in their cars. A few centuries ago and he’d be the vampire a town feared enough to dig up graves and behead the corpses inside, or the witch who lures wayward children to their doom. With no artist in play, it becomes clear how fallacious it is to pin the blame on artists for the actions of disturbed individuals who consumed their art at all.

This is not to say art never affects society or inspires terrible things. When Jared Kushner crows about targeting ads for his odious father-in-law Donald Trump’s presidential campaign to viewers of The Walking Dead because of their concerns about immigration, he’s recognizing the fascist ideology that underlies both the show and the current administration. But art with an ideological vector connects the reader or viewer to a cohesive worldview, which, right or wrong, helps explain society and prescribe remedies for its ills. Action and reaction are to be expected.

That’s different from a movie about a pair of abused kids who become mass murderers and media superstars, or music by a glam-influenced Satanist, or creepy internet posts about a demon with no face. These merely provide monsters who embody fears and desires, not a political program. Those monsters will always exist in one form or another, and disturbed kids like Morgan and Anissa will always find them and use them as the mold into which they pour their crumbling sanity or mounting bloodlust. In blaming the art or the artist, we commit the exact same error, looking for a boogeyman to help us explain the inexplicable. We’re finding our own Slender Man to serve. 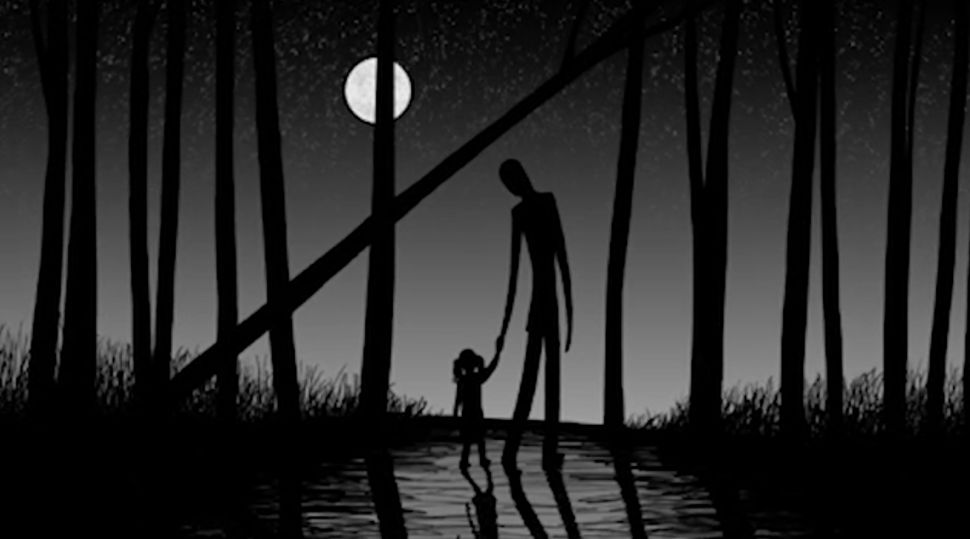