Mayor Bill de Blasio called on attendees at the New York Building Congress’ annual meeting this morning to join his fight to get Albany to extend so-called “design-build authority”—believed to expedite the construction process while decreasing costs—to New York City instead of just reserving it for state infrastructure projects.

Traditional contracts typically fall under the design-bid-build system, wherein the government first hires an architectural firm to draw up schematics for a construction project, then puts the project out for bid to general contracting companies, with winning bidder simply implementing the designer’s plans. Under a design-build model, the contractor is responsible for both drafting the blueprints and translating them into concrete and steel.

In his latest budget proposal, Governor Andrew Cuomo granted design-build authority to all state agencies, but that did not include New York City agencies—leaving de Blasio’s administration at a disadvantage, he said.

“It’s something we all know could help us get a lot done more quickly, but we’re gonna need your help in Albany and there’s a lot of reach in this room, there’s a lot of fire power in the room,” de Blasio told the room full of high-power contractors at the Pierre Hotel in Manhattan. “We need your voice to be heard in Albany these next months because getting Design Building Authority will allow us to create a better city for all.”

The mayor said he could use design-build for a number of projects under development, including his $2.5 billion streetcar linking Brooklyn and Queens and citywide ferry service.

Jon Weinstein, a spokesman for Cuomo, said that there had been opposition in the State Legislature to extending design-build authority across the state, but added that the governor would look to negotiate it in the upcoming budget process.

“The governor is a strong supporter of design-build which has successfully delivered large-scale infrastructure projects, saving time on project completion and taxpayer money,” Weinstein said in an emailed statement. “In the past, there has been resistance to the expansion of design-build statewide, but we look forward to discussing it during the budget process.”

De Blasio recently said that he would be open to working with President Donald Trump if he has a “real plan” for infrastructure. Cuomo himself recently met with the president at Trump Tower and stressed the need to improve infrastructure in the state and federal input on many of the big projects he wants to get done, including improving LaGuardia and John F. Kennedy airports as well as the subway system.

The mayor also touted the city’s progress since he came into office, noting that overall crime is down, high school graduation rates are up and that police-community relations have improved. And he stressed the importance of not holding an anti-development attitude—like those who have protested his sweeping rezoning plans—but rather supporting development that benefits the public at large.

The last has been a consistent point of tension between the mayor and construction union leaders, as the administration has refused to commit to mandating union labor or a prevailing wage in its drive to create more affordable housing. The mayor’s office has insisted that such requirements would stunt below-market housing development, while labor leaders have blamed the the absence of such safeguards for rampant wage theft and a spike of deaths and injuries on building sites. 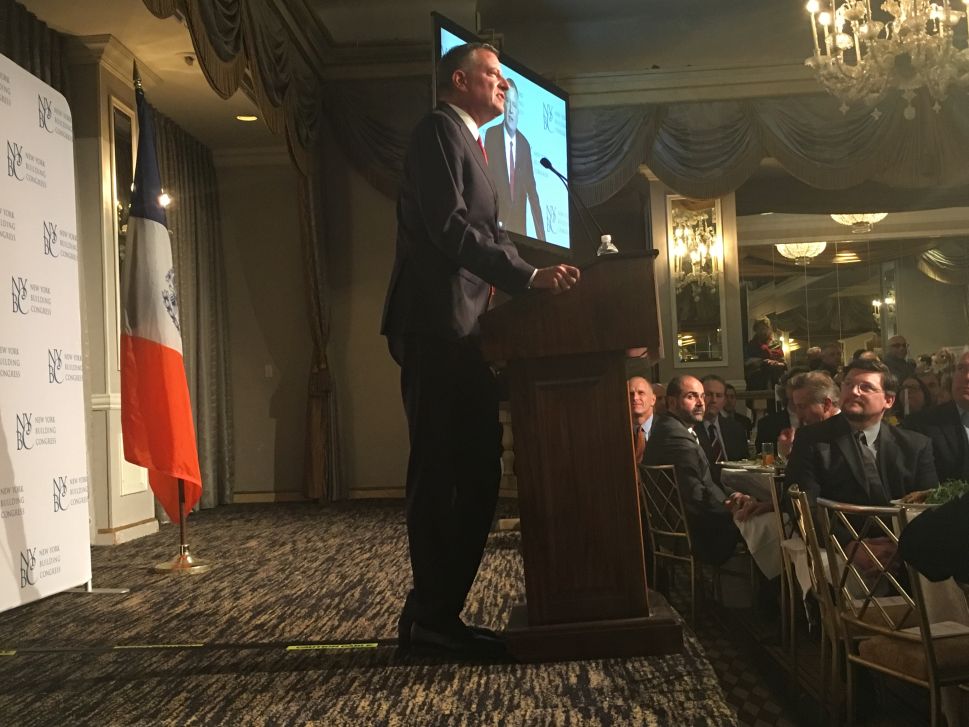