Last week, Trump signed an executive order that will block all federal outlays to municipalities that refuse to cooperate with national immigration authorities. De Blasio has maintained that the city’s decision to remove Immigration and Customs Enforcement outposts from Rikers Island, and not to comply with ICE detainment orders for nonviolent offenders ensures a harmonious relationship between the city’s half-million undocumented residents and the NYPD.

And Massey, for now the best-funded GOP challenger to the liberal mayor, seems to agree.

“I think the city’s policy on immigration doesn’t need to be changed,” Massey said during a discussion at the Metropolitan Republican Club on the Upper East Side.

An attendee said that she believes the mayor has made it his mission to divert as much social services, tax money, benefits and housing to what she claimed the “illegal immigrant population” and said that that population is “unaccountable and unaccounted for.” But Massey stressed that the city should celebrate its diversity, and that the issue is more a concern for border states.

“I think the issues that we have relate to our security and it’s very, very difficult now to know who’s coming into our country, whether they mean us harm, whether they have criminal pasts, whether they are linked to terrorists,” he said, adding that “the whole immigration issue to me is around securing our borders.”

Massey said that he is not yet ready to take a position on the lawsuit two Staten Island Republican legislators filed to stop the de Blasio administration from following through with plans to expunge the files of the city’s municipal identification program. The mayor and City Council created the IDNYC cards to grant a government credential to people lacking other forms of paperwork—and planned to purge the program’s records at the end of last year to prevent a hostile administration from using them as a deportation database.

“I’m not up to speed on the legalities of the back and forth on that, so I don’t know yet,” Massey said.

The Cushman & Wakefield executive declared his candidacy for mayor in August, putting to an end months-long speculation about whether he would run against de Blasio, who has sought to foster good relationship with the real estate industry.

During the event last night, which attracted nearly 200 attendees, Massey blasted the mayor’s record on homelessness, affordable housing and his relationship with the police. He called him “lazy,” recalling the Democrat’s infamous habits of sleeping in late on weekdays and hitting the gym in Park Slope during working hours.

Adele Malpasss, chairwoman of the Manhattan Republican Party, said that Trump’s victory proved that Republicans can still win seats and blasted the mayor’s performance, also noting that number of calls to 311 have gone increased by 70 percent.

“While the headline crime rates are very low and murder rates are down, the 311 calls to police are drastically up…and that is a true measure of our quality of life,” Malpasse said.

Dan Levitan, a campaign spokesman for the mayor, declined to comment for this story. But Levitan has previously said that under de Blasio, overall crime is down, jobs are at record highs and said that the city is building and preserving affordable housing at a record pace.

So far, Massey’s only competition in the GOP primary is Jets lineman-turned-minister Michael Faulkner. But supermarket billionaire John Catsimatidis and Queens Councilman Eric Ulrich have made some of the preliminary gestures toward entering the race.

Any Republican candidate would be at a steep disadvantage in November in deep-blue New York City. 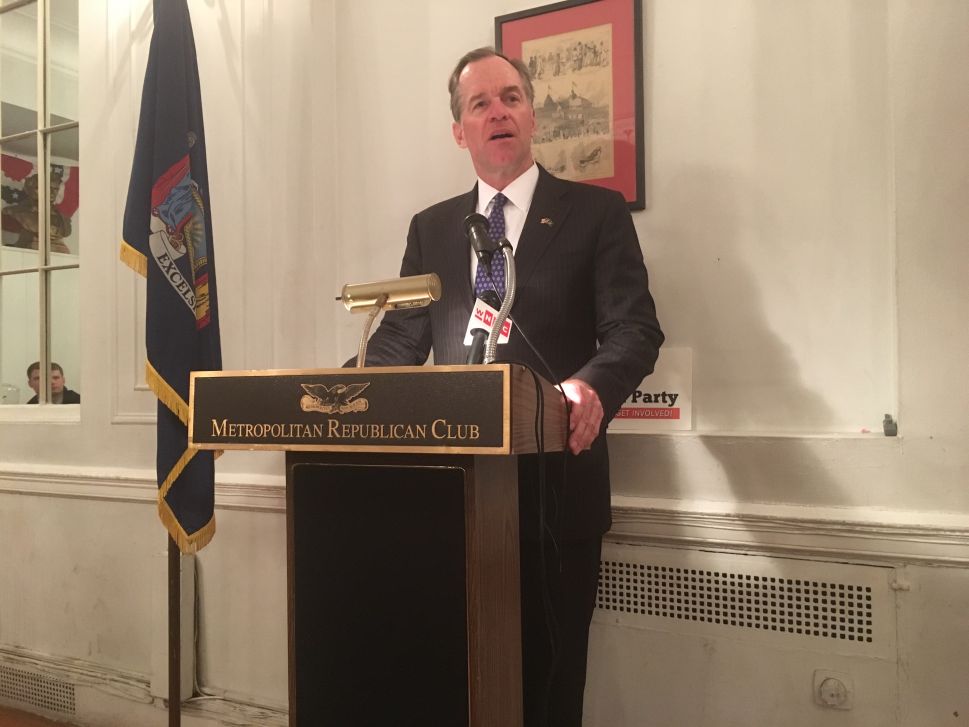