“Quiet, quiet, don’t be rude,” snarled the loudest, rudest guy in the room. “You are fake news.”

The speaker was Donald Trump, the President-elect of the United States. His target was Jim Acosta, a reporter for the CNN television network.

At a news conference on Wednesday, Trump used Acosta as a public punching bag as he cynically conflated two stories that displeased him.

The other report, from the BuzzFeed website, listed—among other things—salacious but unproven details of Trump’s alleged sexual behavior with Moscow prostitutes, something Trump denies and CNN never reported.

Trump’s conflation of the two stories and his attack on Acosta was disingenuous but effective, a ploy of a demagogue.

While blustering and rambling for about an hour, Trump also accused American intelligence personnel of Nazi tactics.

And he declared himself immune from conflict-of-interest problems despite what will be an alarming overlap between his new job and his family-run businesses after he is inaugurated next Friday.

But Trump saved his theatrical invective for CNN and Acosta, who tried to do his job.

“You are attacking our news organization,” Acosta said. “Can you give us a chance to ask a question?”

“Not you,” The Great Leader replied. “Your organization is terrible.”

Trump’s attack is part of a greater offensive against what is known as the established news media.

After the confrontation, Trump press secretary Sean Spicer warned Acosta that he might be banned from Trump’s presence.

This is the same Spicer who casually mentioned Sunday on Fox News Channel that Team Trump might re-think media access to the White House and include more conservative outlets.

“This is a conversation that shouldn’t be limited to just the big media,” Spicer said.

No doubt access to Trump will remain fine for Fox, his sanctuary network, with an Amen chorus that backs him reflexively.

One of the smarmiest is Neil Cavuto, who spouted off Thursday with sarcasm and glee like that of the Bedford Falls banker Mr. Potter, in the film It’s a Wonderful Life, when the rival credit union loses its money.

“How’s all that going down, CNN?” Cavuto asked. “How does it feel to be dismissed or, worse, ignored? How does it feel when your feelings are hurt, when your reporters are singled out, and you’re treated unfairly and unkindly, even rudely? . . . It’s insulting, isn’t it?“

Cavuto didn’t address the dishonesty of Trump’s charges. He had a different agenda.

“I feel your pain,” Cavuto sneered. “You are better than BuzzFeed. But the buzz is, you’re getting fed to the wolves. Isn’t it obnoxious and unfair how some celebrate your plight? . . . They say payback’s a bitch.”

To be fair and balanced about this, certain Fox personalities were more honest than Cavuto. Shepard Smith, for instance, said “CNN’s exclusive reporting on the Russian matter was separate and distinctly different from the document executed by an online news property.”

“Neither they, nor any other journalists, should be subject to belittling and delegitimizing by the President-elect of the United States,” Smith said.

Another voice of fairness was Bernard Goldberg, a regular guest on The O’Reilly Factor.

“Donald Trump was wrong when he said CNN was engaged in fake news,” Goldberg said.

“It’s a fact-free campaign,” he said of Trump and his propaganda staff.

Sciutto said Trump “accused our network, our reporters, of spreading fake news when we, in fact, were right.”

And Acosta added “There’s something worse than fake news and that’s the denial of real news . . . They’re just not in command of the facts.”

A stronger analysis came on Comedy Central from Trevor Noah, host of The Daily Show, who called Trump’s attack “frightening” because the press in America, he said, is supposed to be a check on presidents and not the other way around.

“This is essentially the first step in the authoritarian tango,” Noah said. “That’s what you do. You shut down one news organization by alleging that it’s all fake. That’s your move. And then, if you get away with it, you can shut down another news network. And then another.”

Alas, no such concern crossed the simple mind of Sean Hannity, one of Fox’s Long Island Bully Boys and its most unctuous admirer of “Mis-tah Trump.”

Hannity called Trump’s performance “the single greatest beat-down of the alt-left, abusively biased mainstream media in the history of the country . . . Journalism in America is dead . . . They don’t deserve the access they think they deserve.”

Slightly less vitriolic was Bill O’Reilly, the other L.I.B.B., who said: “You’ve got a guy, Donald Trump, who will declare war on the press . . . This is going to be a nasty war.”

O’Reilly, a longtime Trump chum, was, ironically, a beneficiary of Trump’s Wednesday attack because it kept people from focusing on a story about O’Reilly on the front page of that morning’s New York Times.

The report said another sexual harassment scandal involving O’Reilly was settled with a sum “in the high six figures,” the Times reported, in exchange for silence of the victim and her agreement not to sue.

The report also said O’Reilly lured her up to his hotel room where he opened the door “wearing only his boxer shorts.” She then fled.

Some of the details sounded much like those in a different case against O’Reilly from 2004.

Yet a different Fox sex scandal last summer led to the departure of Fox News emperor Roger Ailes. Apparently O’Reilly—with the biggest ratings in cable news—is not held to the standards that doomed Ailes.

Unlike Trump, O’Reilly didn’t speak publicly about the accusations against him, not even to insult the Times the way The Great Leader might have.

Trump no doubt can feel sympathy for his buddy.

During the campaign, Trump was embarrassed when a recording from 2005 revealed him bragging about how he approaches strange women who look good to him.

Just think: A week from now, Trump will have the whole country by the balls. 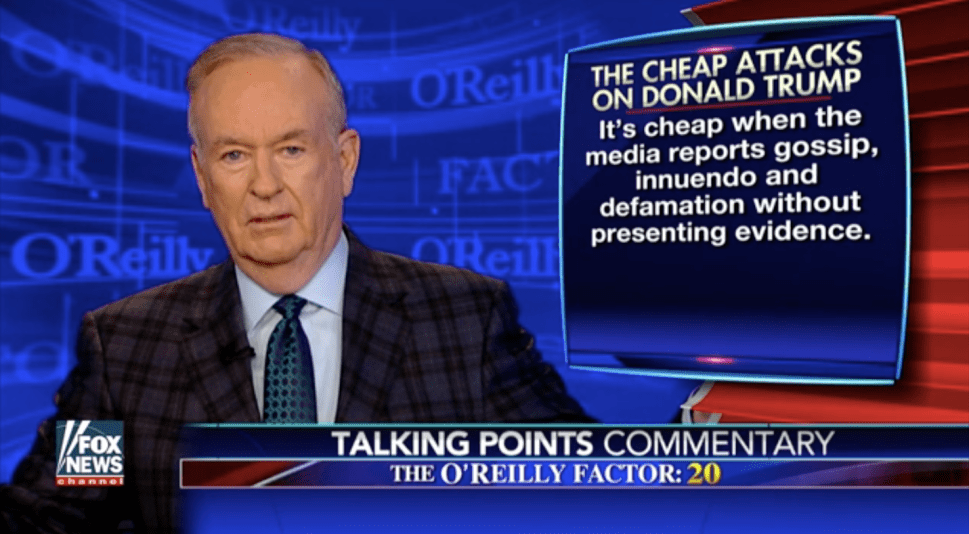