TIP #31 ✖️ HOW TO GET THE MOST OUT OF YOUR SHADOWBOX CLASS: It's all in the inhale/exhale. It's crazy how much your breath can control. Not only is it providing oxygen to your muscles, but it's adding power to your punches and distracting your mind from your weakness/fatigue. During your next class, I challenge you to focus on your breath, keeping that steady inhale/exhale present all class.

Last week was just one of those weeks. A girl at SoulCycle decided it was a good idea to write a short essay on her phone while blocking my locker, a man attempting to be Gene Kelly in Singing in the Rain almost poked my eye out with his umbrella and my computer decided to take a poorly timed “personal day.” Oh, it’s also winter, which means it’s just generally gross and cold out. I was feeling aggressive, but we all know that passively plotting revenge can only take you so far.

Luckily I had signed up for my first ShadowBox class, one of New York’s must-visit boxing studios. As a devotee of SoulCycle I definitely can get out my stress on the bike a few times a week, but I was looking for a place to really work out the rage that tends to accompany life in New York City. Riding up a fictional mountain can do wonders for your soul, but there is nothing like punching a heavy bag repeatedly, in a dark room, to help you find that place of inner peace.

After my first ShadowBox class, I definitely felt a major release of stress. So much so, that you might have even compared me to a Disney princess, prancing around the streets of Manhattan with a crew of woodland creatures in tow. ShadowBox was started by a former derivatives trader, Daniel Glazer; he also loved the release boxing gave him from his high-powered job. He’s not the only one who is addicted to this feeling of release, as similar boxing studios have rapidly popped up around the city and are already attracting people in droves. Rumble Boxing is one of those spaces, as is Box & Flow, which combines boxing with a yoga cool-down.

“We definitely have our loyalists,” Eugene Remm, co-founder of Rumble, told the Observer. “They are the heartbeat of this place. They love everything about the environment.” Rumble opened this past fall at 146 West 23rd Street and will soon be opening a location in Noho; ShadowBox launched in 2015 in Flatiron and just debuted a Dumbo location.

Bloomberg declared ShadowBox as the new SoulCycle in June 2016, although Rumble and Box & Flow could arguably be given the same title, as they both have strong branding and cult followings. ShadowBox takes after SoulCycle with its aesthetically pleasing studio, complete with a juice bar and spa-like facilities that encourage you to hangout before or after class, without wanting to rush straight to work. Though the facilities are just as superb at Rumble, the vibe is a bit tougher. Rumble was founded by Remm, a Co-Founder of the EMM Group, Noah Neiman, a former Barry’s Bootcamp Master Trainer and cast member of BRAVO’s Work Out New York, Andy Stenzler, co-Founder if Cosí, and Anthony DiMarco a 13-time IRONMAN and former Managing Director at Google.

Of the three, Box & Flow is the most outwardly feminine. One of the studio’s taglines is “for women that aren’t afraid to get messy and men who aren’t ashamed to flow.” It was started by Olivia Young, a founding executive of the Altamarea Group who has been boxing since she was 15. Young says that empowerment and self-protection are definitely a draw for the ladies, but there’s more. “It is about being your best self, about living, not limiting. It’s about embracing both sides of yourself so that you have a strength but a softness, can be a lover and a fighter. It offers a balanced empowerment,” she told the Observer.

It doesn’t hurt that every top model of the moment seem to mention boxing as their favorite whole body workout. Gigi Hadid and her sister Bella, Adriana Lima and Karlie Kloss are avid boxers and often post Instagrams from their local boxing ring. These supremely toned women are great role models to have as the face of your workout.

There is a learning curve for boxing workouts—they say you have to take four to five classes before you truly get the hang of it. And like any other fitness class, there is an air of intimidation around your first boxing session, but that’s no reason to lack confidence. “If you can walk, you can box,” Remm assured the Observer. “Its also important to note that there’s nothing to be scared of as you’re the one doing the hitting; the bag definitely cannot hit you back.” 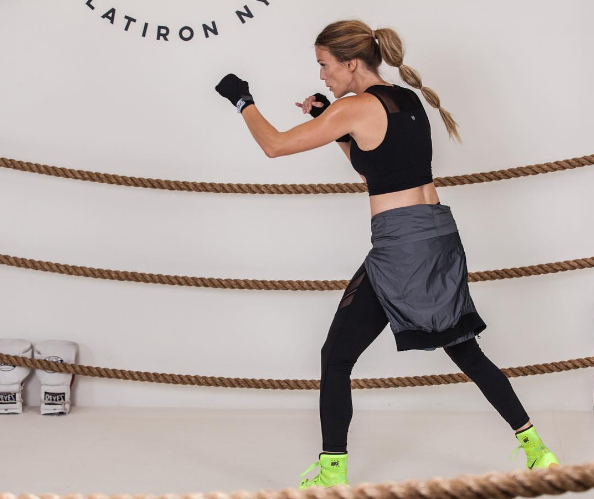