From the moment Theo Galavan drove a knife through his neck in Gotham‘s second season, Jerome Valeska—resident proto-Joker of Fox’s Batman prequel—knew he would return. Or, rather, the actor behind the smile, Cameron Monaghan, was sure he’d be back in Gotham City one day. Gotham‘s producers, realizing they had a bona fide scene-stealer on their hands, were already putting pieces into place to bring back the once-and-future Clown Prince of Crime to clash with David Mazouz’s bite-sized Bruce Wayne.

This left Monaghan, who made his mark in Showtime’s Shameless, with a guaranteed job down the road…and a whole lot of time to spend inside the head of a violent, psychotic carnival clown. Now, thanks to a few devoted followers and some Dr. Frankestein-esque shenanigans, Jerome is coming back to Gotham, and Monaghan has used that year of prep time to showcase a character bigger, badder and better than ever. Well, “better,” relative to “dead.”

Oh, and one more thing. Wait until you see this guy in motion in the next couple weeks: pic.twitter.com/UPq2zp2fGj

I hopped on the phone with the actor a few hours before his big Gotham return (well, his conscious return) to discuss stepping back into the clown-shoes of the man who would be Joker.

How early did you know you were coming back to Gotham, and what did the producers tell you, exactly?

I knew pretty much from the third episode I shot in the second season, episode 203, which is when my character dies [laughs]. While we were shooting it, I had a couple conversations with producers who said “Hey, we really like what’s going on, and we have some plans for the character already. We possibly could bring you back next season, maybe something involving the Hugo Strange character, or the Dollmaker. We’re not quite sure the fine details, but know it’s an option for us.”

I was able to then use this past year and a half to kind of think about what I wanted to do, and start planting the seeds of ideas. That was a unique opportunity to really get time to prep.

How much freedom were you given during that time to craft this character the way you wanted?

A lot. A lot of freedom. I’ve been given more and more leeway. As you live with a character longer, you claim more ownership over it. You become more defensive of it. It becomes like a person that you know. And with Jerome, because I’ve had so much time to inhabit him, I’ve played around within him a lot. I came to set pretty much in-character from the second I put the makeup put on.

“I felt like the only way to play [Jerome] would be to push the buttons of the other characters. The best way to get genuine reactions was to shock them.”

From there, I would go off-script, a lot. Obviously, there are specific circumstances and beats that have to be hit for the story to make sense. But there’s leeway within the interactions themselves. Jerome is a very reactive character. I felt like the only way to play him would be to push the buttons of the other characters. The best way to get genuine reactions was to shock them; hit them with sucker punches, take them off-guard, push them off-balance. I had a lot of fun being able to be the showman. There’s this sequence in episode 314, in the final episode before the break, where he really steps into his own as the showman, the ringleader. Literally. In doing that, he takes the main stage. I had a lot of fun making a meal of it, doing whatever struck my fancy to a captive audience. A lot of fun.

Do any specific quirks or improvisations you added to Jerome spring to mind?

Jerome has a walk that I very specifically wanted to be his. The way he holds his arms. He has this tic where, because he was stabbed in the throat, I’ve given him an affectation. His voice has slightly changed. It’s rougher, and wheezier, which has affected his laugh as well. It comes out in these staccato croaks, or it’ll go into a higher pitch. But he has this weird tic where he clears his throat, and puts his entire body into it. It’s hard to describe, but when you see it you’ll know what it is. That’s one specific thing that I always liked doing because it instantly made everyone around me uncomfortable [laughs].

It was more playing with the dialogue and the humor of him. He does have such a mean-hearted humor to him, so being able to say anything I wanted to say, and feeling safe within the set and given the room to do that, and being with actors who were able to handle it was really great.

Can you talk specifically about working with David [Mazouz], who plays Bruce Wayne? Because, almost more than anyone, you want to make sure the chemistry is there between Jerome and Bruce.

Absolutely. It was almost entirely off-the-cuff. David is a guy I really liked already from being on the show before, a really sweet, intelligent kid. Coming into this season, the first thing I noticed was how he’s continued to grow as an actor as he’s grown in age. He was really present and really capable of showing the necessary restraint with his character to counteract against the insanity and over-the-top nature of mine.

“I’d show up on the day, as Jerome, and [David Mazouz] had to trust that if I would choose to grab him—sometimes I’d grab him by the face or by the coat collar or something—he was O.K. giving it back and being confident enough to stand it.”

We have a big arc playing off each other in this season, these few episodes. There was a lot of give-and-take between us, and most of it wasn’t rehearsed. There was some stuff that had to be rehearsed, there’s a big set-piece fight, a big physical confrontation that obviously had to be planned ahead of time. But for the most part, I’d show up on the day, as Jerome, and he had to trust that if I would choose to grab him—sometimes I’d grab him by the face or by the coat collar or something—he was O.K. giving it back and being confident enough to stand it. He was really great within the scenes and gave me a lot to work with and bounce back off of. That relationship is so key to understanding both of these characters. It gives a glimpse into both their psyches, their conflicting philosophies that are burgeoning and developing over the course of these episodes.

Something I’ve always found interesting is how often comic book storytelling reflects reality; Gotham delved into it already, earlier this season. And what’s so interesting about Jerome is this cult-like following he’s built. Did you see any real-life reflection in that aspect of the character? What do you think it is about charismatic but dangerous people that attract that type of following?

People are attracted to confidence, and a commitment to ideas, no matter what those ideas are. People can gravitate towards something being said passionately, or violently, or expressively. Jerome has that in spades. He understands the dynamics of a crowd. He understands how to play to it. He started learning in the second season, when he invaded the police department and slaughtered all the cops, he started to understand what it meant to be in his role. So he comes back as this sort of messiah figure, and he fancies himself as this twisted savior of these people. In his mind, in his ideology, he really believes that he is freeing these people. Which is a very frightening idea, and is reflective, I think, of certain ways people can twist ideology or reality in their favor to manipulate other people for their personal gain. Especially for manipulating young people to sacrifice themselves, sometimes violently, for their cause. That’s sort of what we’re tapping into, with this character. The idea that he exists in everyone; in some dormant state, there is the potential to be someone like Jerome. You could be as awful as him if you’re inspired enough, or fanatical enough, or you’ve lost touch with reality enough.

“That’s sort of what we’re tapping into with this character. The idea that he exists in everyone; in some dormant state, there is the potential to be someone like Jerome.”

That’s sort of what we’re tapping into, with this character. The idea that he exists in everyone; in some dormant state, there is the potential to be someone like Jerome. You could be as awful as him if you’re inspired enough, or fanatical enough. If you’ve lost touch with reality enough, you can latch on to an idea. I think there’s a certain reflection of that in our modern times.

But that being said, we tried to make this story timeless enough…I think that’s something comics are good about. They survive aging in a way that a lot of stories can’t because they are mythic and heightened. They’re about iconoclastic figures that don’t necessarily age at the same rate as a different story might.

[This interview has been edited and condensed. Season 3 photos courtesy of TV Insider] 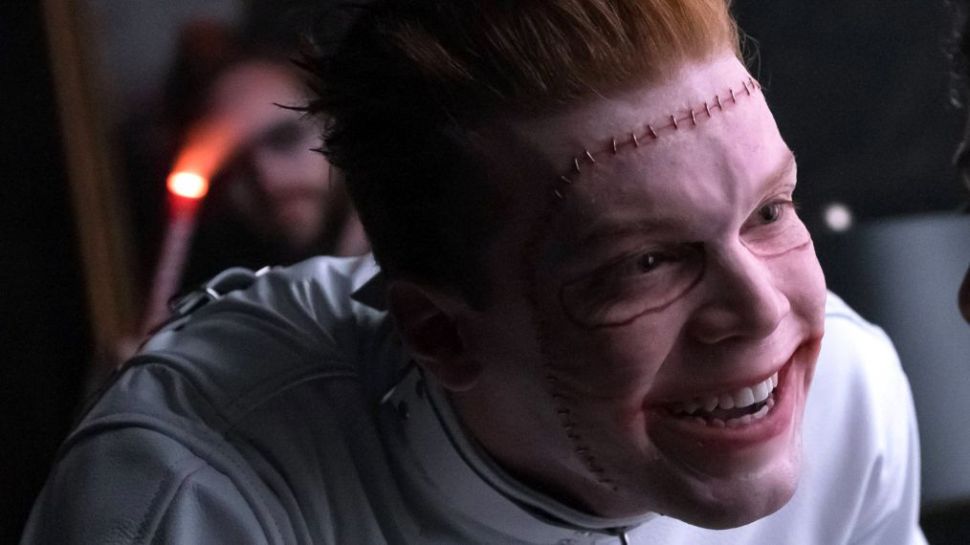