Jaki Liebezeit, Can’s gifted, urgent, and deeply musical drummer, died this past Sunday. He was 78.

Naturally, let’s start this obituary by talking about “I Really Love You” by The Stereos, a Doo-wop group from Steubenville, Ohio, (birthplace of Dean Martin, a fact not even remotely relevant to this article).

Released in 1961, “I Really Love You” is a magical and greasy expression of syncopated, stuttering, stomping desire (it clearly had a deep impact on Joe Meek and Dave Clark, but again, that’s another story). It’s ridiculous, original, entirely American, and a prime example of the vastly innovative groan of heart-thumping, small-hair-tickling rock ’n’ roll present at the dawn of the space age.

I could just as easily cite “Sea Cruise” by Frankie Ford, “Blue Moon” by the Marcels or “Denise” by Randy and the Rainbows, any and all of these gorgeous shrieks from the time when rock ’n’ roll seemed both adamantly new yet connected to the bursts of rhythm, fear, and joy that built America the beautiful, America the horrible, and America the everything in between.

But barely half a decade later, we find Jim Morrison hanging onto a microphone for dear life and blubbering something about the currents breeding green galloping monsters in mute nostril agony, and you wonder, what on earth went wrong here?

Why, for the most part, did American rock ’n’ roll fail to find a way to become artistically progressive yet still retain a connection to the spirit of the backseat angels, street corner sharpies, and pool hall prophets who built the church?

I mean, the Velvet Underground got it. They understood that rock could be both utterly trashy and avant-garde, that it could reflect the hoodlum and the beatnik and the professor. But why did almost everyone else just look up at the dealer, ask for the key to the mellotron, and say, “Do you offer surrender?”

Somewhere between Europe and America, the desire to blend the primitive and ecstatically ridiculous with the artistically inventive was, for the most part, lost before it could reach us. Simultaneously, doing something progressive became synonymous with dropping a reference to Mussorgsky 18 minutes into side three, and many of the post-Beatles acts that had the tools to create a visceral kind of progressive rock were derailed by the idea that they were only one radio hit away from a mansion in Bel Air.

West Germany in the 1960s and ‘70s, where there was virtually no radio venue for indigenous electric pop rock, was a wildly and beautifully different story. Music that incorporated avant-garde, avant-rock and avant-jazz flourished without being disconnected from the visceral, muscular, and romantic intent of pre-Beatles rock.

To put it a different way, imagine if all your favorite (potentially) strange American acts of the 1960s and 1970s—anyone from the Doors to the Dead, from Hendrix to Blue Cheer, from Tim Buckley to the Blue Öyster Cult—had existed without any expectation that they would ever get on the radio?

Imagine if the pop frame was just removed entirely from the picture, and coloring outside the lines was just, well, coloring. Imagine if “Sister Ray” or “Black to Comm” were the norm? Imagine rock without the shadow of the Golem of song-driven radio. Imagine an environment that encouraged a natural connection between the greaser energy of the 1950s, the blissful bleat of beatnik bop, and the creative and musical experimentation of the ‘60s and ‘70s.

Yes, Krautrock. Can. Jaki Liebezeit. Rock without the radio god telling it to bow down and behave.

Another remarkable aspect of the musical microsphere of Krautrock is that the artists felt free to draw, in equal measures, from many different traditions.

Can, for instance, continually referenced garage punk, art punk, avant-classical, and experimental, Western pop, and about half a dozen forms of (what would later be called) world music.

They treated each with equal respect, and more importantly, equal disrespect; which is to say that when Can combined reggae, traditional jazz, Velvet Underground jackhammering, beat poetry, and free jazz into a single composition, they did it with the same sense of joy and the same sense of the heretically ridiculous that the Stereos had when they transformed plantation work chants, chitlin circuit singalongs, and churchy call-and-response into a greasy horndog valentine.

Can and the other Krautrockers were attempting to make riotously inventive and progressive music while retaining the fiery spirit of first-generation godly greaseball rock. In fact, I think this spirit—combining everything they loved into a boundless, electric-ensemble-based form of expression—came exceedingly naturally to them.

Think for a second: What is more indigenous to the wild, young, creative soul? The visceral, aboriginal screams of one or two chords, echoing autobahn and lunar-orbiting Apollo (as played by Neu!, Kraftwerk, and Can, among others), or the studied, smug, musically precise noodling of ELP or Phish? Man, ELP and Phish, that is some unnatural shit, completely contrary to theology and geometry.

The West Germans, virtually alone in their era (’68 – ’76), understood that the absolutely logical and natural means of transitioning early godrock into the progressive era was via adventurous and articulate minimalism and high-energy, high-concept primitivism, skipping over the existence of the Beatles and their over-iced wedding cakes entirely.

In many ways, Can were both archetypal and atypical of the Krautrock genre they came to represent.

Like many of their peers, they were rooted in experimentation; a love for avant-garde composers like Stockhausen, LaMonte Young, and Cage; an interest in opting out, almost entirely, from “traditional” pop song structures; a belief in the liberating power of ancient, worldly rhythms; and an overriding belief that the Velvet Underground were their saviors.

On the other hand, Can had a sense of ensemble interplay that was intricate, interwoven, and based in ‘50s and ‘60s developments in modern jazz and avant-garde composition, coupled with a musical expertise that was compatible to, say, the skills of Zappa or Weather Report (bassist Holger Czukay is one of the most inventive and accomplished electric bassists of our time, and entire bands, like Primus or Public Image Limited, were created literally in his image).

That Can was able to integrate this astounding musical expertise into a musical palette that had more to do with the Stooges or “Sister Ray” than “Karn Evil 9” is their miracle, their genius.

The heart of this singular band was, without a doubt, the rhythm section of drummer Jaki Liebezeit and bassist Holger Czukay.

It’s almost inaccurate to call them a rhythm section; Liebezeit’s drums (which talked, whispered, and told stories) and Czukay’s skipping, hugely adroit chords and runs provided, for all intent and purposes, the primary melodic elements in Can. In many ways, I think of Czukay and Liebezeit as the actual vocalists in Can—their playing seems to spell out the memorable and affecting elements of the songs more than the actual vocals.

Can are, in fact, a rhythm section fronting a band more than they are anything else. Can are a mist of star-like vibes and a flurry of delicate hailstones. They are rubbery and elated and crisp, fluid, flying, and always doing something, even when it manifests as Milky Way ambience.

Unlike other players of comparable skill, they virtually never base a recording or composition around the idea of drawing attention to the individual players. And although Liebezeit’s playing certainly implies the tic-tic motorik drumbeat Krautrock is associated with, he generally has a fluid, almost funky approach, very different in execution to the “Apache” beat favored by Neu! and La Dusseldorf (and automated by Kraftwerk), even if it’s similar in effect.

My favorite Can album is probably the wide-sky, desert sunset good trip/bad trip ambience of Future Days, an LP that delicately unwinds and spins like a top in a planetarium. But really, every aspect of their catalog—especially everything they released in the first half of the 1970s—is full of strange and arresting delights that still stagger with their originality, wit, energy, expertise, and insouciance.

Investigate Can’s music and you’ll find almost-weird almost-jazz infected by acid and oxygen and spray-bottles of air and space, almost as if there was time traveling within the music, as the players found new holes within holes, new places to play less while injecting a comma or exclamation point of playing more.

Throughout, Liebezeit is crisp and constant yet invisible and perfect, and he sits at the absolute center of this amazing band. His gifts will forever drift to the outermost reaches of our cosmos, and if we’re lucky, one day we’ll meet him there. 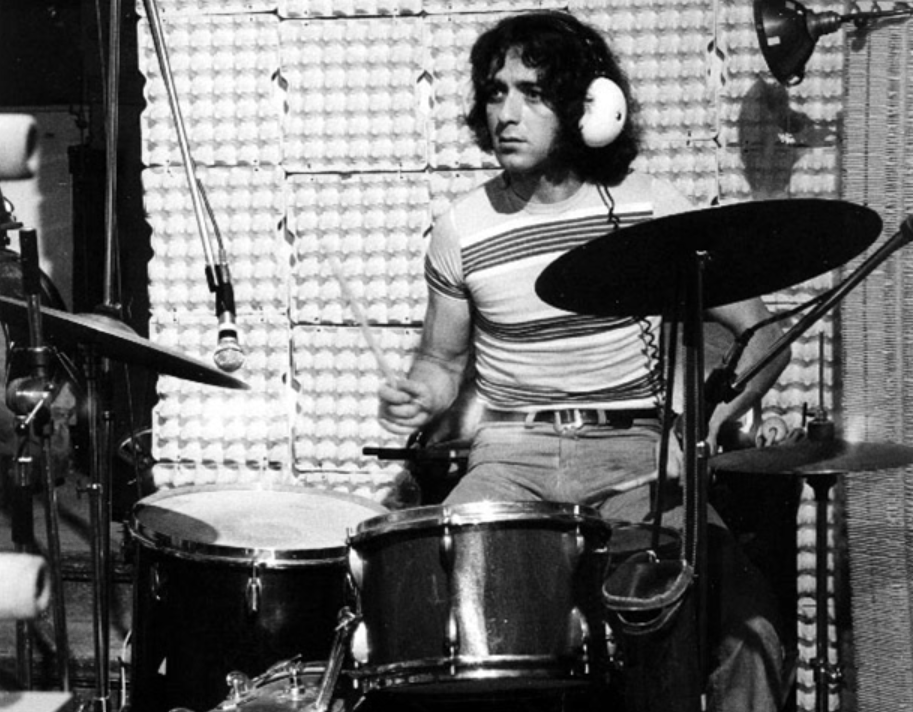