I was home for the holidays with my wife and my youngest brother, sitting at the breakfast table, listening to my 82-year old father on the phone.

He was talking to a telemarketer. After my mother died and he starting living alone, this had turned into his way of socializing.

Exhausted from years of taking care of my mother at home, Pop welcomed his newly-acquired solitude as a time to paint the big oils, which lined his basement studio.

“I’m too tired to take care of anything,” he had said when I suggested getting a cat.

But at dinner he had let slip that “It gets lonely sometimes,” and I saw my wife’s eyes light up at the opportunity to match-make, which is her unofficial second calling. Later, she, my younger brother Gabriel, and I combined forces to introduce Pop to senior online dating.

My father did not embrace change, so this wasn’t easy. He railed daily about small portions at restaurants and fashionable men wearing suits that are too small. To him, online dating was the end of days.

Gabriel and I presented the idea with what we thought was a good hook: “You meet people online, so you don’t even have to leave the house.”

“How can you tell anything about anyone on a computer?”

My astrologically-attuned wife noted that my father was a Gemini, the twins, whose duality of contradictions included sudden changes of mind. She soft-pitched the big picture, re-branding dating as companionship.

“You could just have a coffee…”

Surprisingly he said he would think about it.

The next morning, he mumbled, “Maybe I could…er…try this Internet thing.”

I almost dropped the container of unsweetened vanilla soy milk that he once swore he would never use and now regularly does.

“Really?! That’s great! Gabi will set up a profile for you.”

Any task that involved tech fell to my brother, Gabriel, who is 10 years younger than me. He had built websites, designed cars, houses and, most importantly, was in his thirties and gay. To my mind, gay guys didn’t seem to have much difficulty meeting other gay guys. I was sure that these social techniques could be retrofitted here.

My brother and I had a meeting.

“I’ll create a profile for him on Match.com” he said.

Could a 39-year-old woman have a romantic interest in a guy whose medicine cabinet was a museum exhibit of the oldest salve tubes ever made?

“You guys use that?”

“Hard to speak for us all but the wining and dining stuff, not so much. Gay men…at least the ones I know…pretty much cut to the chase.”

“Things have changed since you wandered the earth, single, in multi-pleated pants.”

Later, my brother and father sat in front of the computer, setting up the old man’s profile.

“Pop, you may have been six feet once but you shrunk a little…”

“Just put six one then, leave out the half…”

An Herb-Ritts-on-a-budget photo session followed with my old man in a variety of poses, ranging from whimsical to rakish. My wife arranged his lonely hair strands into a “Trieber,” a swoosh somewhere between a Trump and a Bieber. A leather bomber jacket covered up his favorite moth-ravaged sweater. Nose and ear hair was clipped, Chapstick was applied, and lint balls were mercilessly torn from their perches. A bottle of vodka appeared and then mostly disappeared.

Afterwards, my brother uploaded the photos and ran a general search for my father’s preferred type: “Mediterranean.”

As always, Pop’s first reaction to the results was critical.

“They all have mustaches.”

“Shadows. Put on your glasses and keep scrolling down. It takes time.”

He sat in front of the computer, heckling the profiles.

“Everyone looks either like Phillip Seymour Hoffman or Burt Young.”

My brother suggested that maybe he would have a better shot of finding a “Mediterranean” woman on J-date, and signed him up there.

He bristled at the profile questions.

“One complaining yenta after another. This one writes: ‘No more liars. There are too many liars on here. Do not contact me if you are a liar.’ And these photos; it’s all polka dots and liver spots!”

A day later, he announced that he had gotten a bite but that it hadn’t worked out.

“I tried talking classic Italian films. She says: ‘My poodle’s named Fellini!’ What the hell is that?! Plus, she lives in Florida: the land of nothing but lizards and shvitz.”

“You’ve never even been to Florida.”

“I’ve never been bitten by an alligator either.”

“I found someone!” he announced. He sounded happier than he had been in a long time.

“This lady, Linny, contacted me from J-date. Very nice blonde.”

“You said no blondes?”

“That’s great. She lives nearby?”

“No. She lives in Florida. She sent a picture. It looks nice there.”

“I thought you hated Florida?”

“How could I hate somewhere I’ve never been? She’s originally from the Bahamas.”

“That’s a kind of Mediterranean, I guess…”

“She wants me to come visit. I’ll fly down in a couple weeks.”

“You? Fly to Florida?! You hate flying! What’s her name?”

There was a pause before he answered.

It was the old “burning chicken” dismount line, deployed when my father didn’t want to talk about a subject anymore.

I looked at the picture of her that he had forwarded. She was very attractive. Was it possible that a 39-year-old Bahamian woman who looked like a really tan Minnie Driver could have a romantic interest in a guy who wore sweatpants with suspenders, reused toothpicks, and whose medicine cabinet was a museum exhibit of the oldest salve tubes ever made? Either this was suspect or a miracle.

He answered the front door, soaked in perspiration. In the background I could see the computer screen on.

“Why are you all sweaty, pop?”

“I’m trying to reduce!” he pointed at an exercise bike that was previously used as a giant paperweight.

“There’s some food on the table. I’ll be right there.”

When I saw the lunch he had prepared, I couldn’t believe my eyes. It was a minuscule salad, and he hated tiny portions of food.

“Such a restraint in portion size,” I commented.

“So tell me about Jeannie.”

“Mostly we communicate through this little box in the corner of the screen, er, ‘hangout’ I think its called. I’m still learning how to do it. We are thinking if this led to a marriage arrangement, we would have separate residences; her there, mine here.”

I almost spit out a mouthful of shredded cabbage topped with a moderate amount of light dressing. Marriage arrangement? This was more serious than I thought.

“Pop, the age difference is…”

“Noam Chomsky remarried a young lady, a Brazilian. The first time he was happy. Picasso’s last wife was much younger!”

“Whoa. Pop. You haven’t even met in person.”

“We talked on the phone last night, but it’s difficult with her cell phone and my land-line. She wants me to get her a phone card.”

“I don’t understand. She wants you to buy a phone-card for her? Pop, it’s just weird. What do you know about this woman? What happened with her last husband?”

“She didn’t say much; it’s a sensitive topic. She doesn’t like answering personal questions. I understand that.”

“But you have a phone number?”

“I had a phone number but it expired because of the phone card, and that’s why she needs a new phone card!”

We went back and forth before I persuaded him to show me some of their correspondence. It was awkward for us both. In it he wrote how he’d loved my mother and how it had hurt when she died. How conflicted he was over feeling lonely yet missing the company of a woman. It was hard to read the things he felt so deep inside.

Jeannie kept it light and breezy. She addressed him as “baby” and attached pictures of herself at sunset. “Come to sunny Florida and leave your troubles behind!” she said.

Before I left I said, “Pop, don’t give her any financial information, any social security numbers, any bank account info, any of that stuff…”

I googled “Internet scams used on elderly” and “cat-fishing” came up. I forwarded the victim’s tales of woe to him.

There was radio silence for a couple days. I wanted to protect him. It was hard because he was so excited about Jeannie.

Then, one evening, I got an email from him that contained an attached letter, addressed to “Jeannie or whoever you are.” In it he said he couldn’t be with her unless she gave him honest answers to his questions.

He sent the letter. Days later there was still no response. He was angry, embarrassed at having been so hopeful, and a bit sad.

In the days to follow, he told me that he had sworn off online dating.

“Now I understand ‘no more liars’” he said as he destroyed a Chinese food buffet.

One day, he called and announced that he had an actual date with a sixty-ish social worker he had met online.

D.C. Benny is a comedian and writer who lives in Brooklyn and was most recently a top 8 finalist on NBC’s Last Comic Standing. His video “White Boy Rips It At The Apollo” has been viewed over 7 million times. http://www.dcbenny.com/ 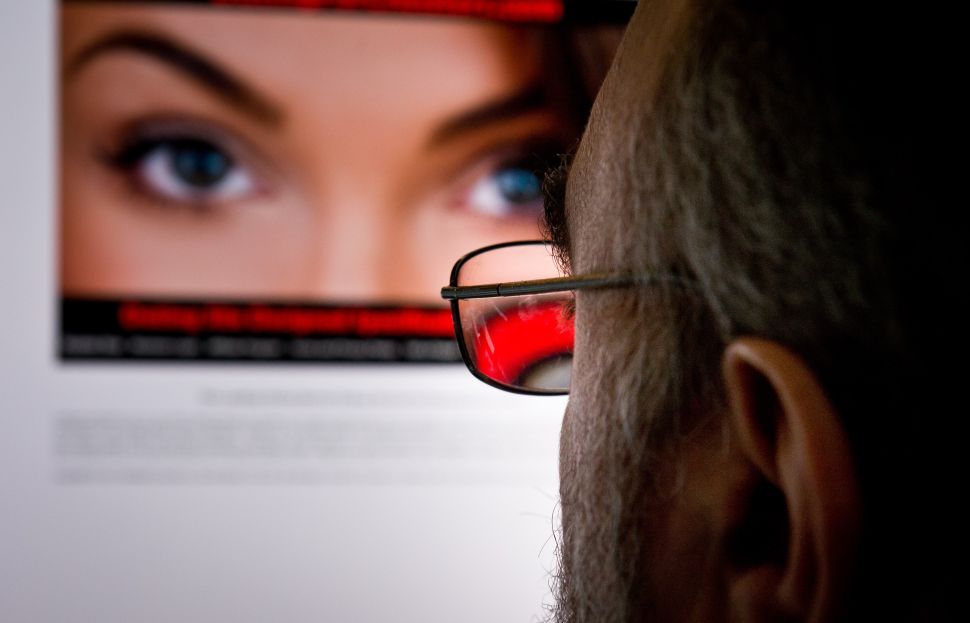