We have written about the social and cultural behavior of urban Chinese youth and pointed out that well-meaning foreigners, middle-aged Chinese, and a wary government dismiss much of this behavior as copying the Westerners because it doesn’t fit into standard Chinese stereotypes. Now emerging from a vast social transformation over the course of three tight decades, the new Chinese culture developing is in fact profoundly Chinese, but no longer representative of a China that was once rural, uneducated and inward-turning.

Consider the development of Chinese shopping habits. According to Fortune, in the U.S. “Cyber Monday 2016 was the biggest day in the history of U.S. e-commerce,” hitting $3.45 billion, to follow up Black Friday’s online sales of $2.72 billion. However, Cyber Monday and Black Friday combined were dwarfed a few weeks earlier on November 11 when China’s Singles’ Day saw $17.8 billion changing hands.

Singles’ Day started as an obscure holiday at the prestigious Nanjing University in 1993 before rapidly spreading to other eastern campuses. Singles’ Day is Guanggun Jie in Chinese, or “bare sticks holiday.” The four integers of November 11 symbolized unattached males—later also females—in a conservative society where adult social life barely existed until marriage, which was preferably early in life. With new social and sexual freedoms emerging on campus, Singles’ Day was a wry acknowledgement that there was more to life before marriage than an undefined limbo.

Over time, Singles’ Day has developed its own tongue-in-cheek rituals, including dinners and buying gifts mostly for oneself in pretense of consolation for the burden of being single. Its rapid spread received a huge boost in 2009, when tech giant Alibaba Group adopted the name for a sales promotion involving 27 vendors. The obscure holiday, under Alibaba’s aegis, has now snowballed into a cultural event comprising over 16,000 sellers, 115 million shoppers, and a 24-hour live broadcast reaching over 100 million viewers.

Alibaba’s core business is built around the emerging online habits of China’s e-commerce-mad middle class youth. With its consumer-to-consumer marketplace (Taobao), a retail platform for companies and brands (Tmall), and a proprietary payment platform for smartphones (Alipay), perhaps no company is more emblematic of urban China today; not just because young Chinese are such avid e-commerce customers, but because Alibaba’s huge size and its emergence from nothing is a symbol of the impermanent new China inhabited by its users.

Singles’ Day can best be understood as a kind of culture, specifically an urban youth culture improvising irreverently as older Chinese holidays and customs are torn from their contexts and become barely more relevant to these young Chinese than those of foreigners. Its great innovation lies in capturing a generation’s embrace of bleeding-edge technology and fusing this with media, entertainment, and shopping in a way that blurs the line between the three. From time to time, television spokespeople get sniffy about its superficial and commercial spirit, but that has never seemed to matter to the youth.

The holiday’s name describes its prize demographic: young, unattached Chinese with smartphones, a sense of humor, and money to spend. In an article published last month by the 21st Century Business Herald, Alibaba Group Vice President Gao Hongbing said that individuals between the ages of 26 and 30, who make up under 10 percent of the population, have accounted for over 30 percent of total sales. The second largest block is the 18-25 range.

The appeal to youth was clear in the multimedia hype surrounding Singles’ Day 2016, presaged by a three-hour television event counting down to midnight and featuring cameos by David Beckham, Kobe Bryant, Scarlett Johansson, and a Mandopop boy band singing “I’ll teach you to buy.” Shoppers could use their phones to participate in various Singles’ Day activities, by shaking them, using them to play augmented reality games, and slotting them into VR headsets for virtual shopping. The Singles’ Day television gala mimicked the annual CCTV New Year’s Gala, “the world’s most-watched TV program.” It even featured a billboard with a red-LED ticker displaying gross sales figures in real time.

Singles’ Day is often compared to Black Friday and Cyber Monday, but the differences are instructive. Take, for instance, the prevalence of smartphones. While on this year’s Cyber Monday, mobile shopping accounted for 31 percent of sales, more than 80 percent of Singles’ Day transactions were completed on mobile devices, according to a CNN report. Black Friday’s evolution from brick-and-mortar sales launching the Christmas shopping season leaves a legacy still evident in American Thanksgiving-day newspapers, which overflow with Black Friday ads. Cyber Monday’s 2005 debut attempted to shift this shopping online. Singles’ Day, however, is a digital native and a consumption ritual for the smartphone age.

Indeed, Singles’ Day has become a ritual but, unlike Christmas, it has no one no history or tradition. It is a holiday for a new China: for young urban consumers happy to celebrate themselves by auto-gifting, the commerce equivalent of a selfie. Without history, it is as likely to become a permanent fixture in China as it is to eventually die out. Either way, Singles’ Day and its staggering sales numbers stand out not just in economic terms but as an expression of China’s emerging urban culture. 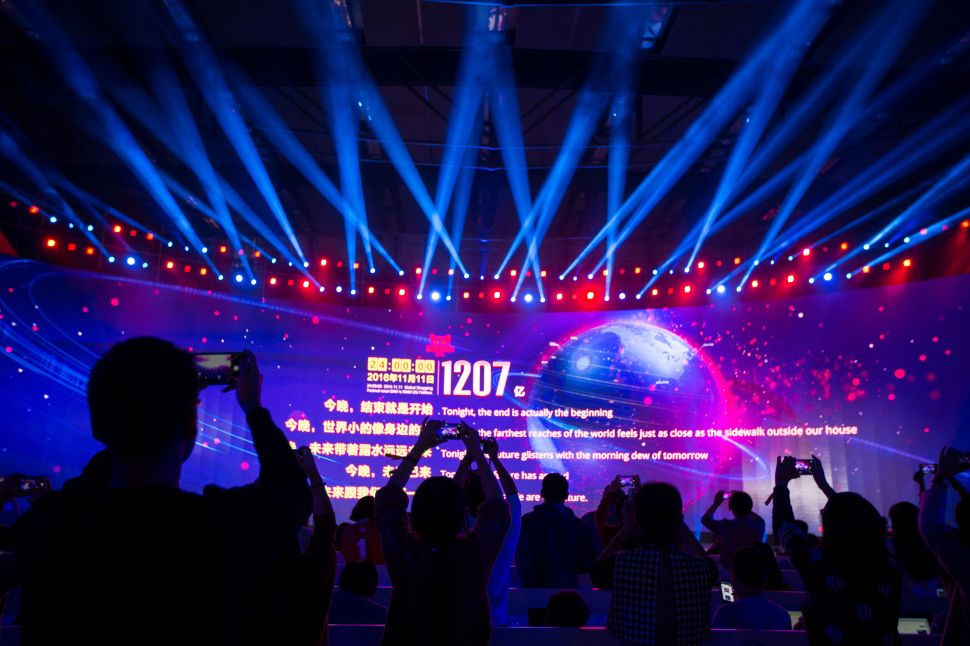