Dashboard Confessional’s lead singer, Chris Carrabba, created singalong anthems for a generation of misfit suburban kids, who still scream along at emo nights across the country. Now, he’s back on tour, selling out clubs in seconds, and reflecting on the resurgence of the genre he helped create.

In preparation for his New York tour dates, Carrabba spoke to the Observer about how Boca Raton, Fla., became an emo enclave, why his band occasionally hates him and what fuels his constant quest for community.

How did growing up in South Florida influence your early music?

Everybody that doesn’t live there thinks it’s strictly this wealthy, upper class fantasy paradise. Anybody who lives there knows it’s just like any other place. I rode my skateboard to school, I didn’t have a Mercedes. This shaped my outlook as an artist in a certain way of feeling like an observer. There was that weird duality of access to this semi-fabulous lifestyle. It was a very huge culture shock and I explored that a lot with my music.

How did those experiences lead to you to write music?

Those of us that were artsy and aware in a sophomoric way of our demographic began to gravitate toward each other. Being a skateboarder—which I was, and a good one, sponsored by a bunch of stores and companies—at that time made you a real outcast. It was more likely to get you beat up then to get you a girlfriend. That paradigm shifted big time with Ryan Sheckler getting a TV show. Because skateboarding was our main endeavor and passion, we had to find something to do on the many rainy afternoons. So, we started picking up guitars and that’s when I discovered that I had a lot to say.

How did those friendships help create the emo scene?

If you asked me who I was out with last night, I could honestly say that Chad from New Found Glory and I went out with some guys from Further Seems Forever and one of the guys from Paramore. Chad and I were instrumental, among others, in figuring out for some reason there was something going on both in Long Island and New Jersey that mirrored what was going on [in Florida]. We booked a tour together and it stunk except for Jersey and Long Island. We exchanged numbers and next thing we realized is there were bands like Saves the Day, Midtown, The Movielife and Taking Back Sunday.

“What you get from being right on top of the audience is just visceral.”

How does playing a smaller club change the experience of your live shows, which are famously interactive?

It’s proven the relationship we have with our fans is based on being totally present and totally honest. The whole inception of the band, and it proved to work, was that this should be something experienced between audience and band without some kind of division between who’s who. I just wanted to start this year to go back to the rooms that I feel a special kinship with. What you get from being right on top of the audience and them being right on top of you is just visceral. What I didn’t expect was how badly the audience wanted that. They seemed to want it even more than I wanted it.

What can people expect on this tour?

I always do the songs I think everybody wants to hear, because those are special moments between the audience and me. That energy level swirling through the room can’t get old. I imagine the men and women that are buying tickets this fast are the diehards. They know the deepest tracks, some B-side of a 7 inch that come out in Germany in 2006.

I’m actually staring at a list right now and probably see 40 songs I haven’t played in years and years I’m going to make sure I know. When I do small clubs and people shout out a song, I don’t stick to a set list. I will admit my band gets frustrated when I turn to them and say, “We’re going to play ‘Again I Go Unnoticed’ ” and then someone says “Turpentine Chaser”! I don’t even think, I just react and I’m suddenly playing that and my band’s first note is dead wrong. We might play different versions of songs we’ve been playing a long time. It’s a chance to push some boundaries.

What are the deep cuts people always ask for?

I literally have said out loud, “What song is this?” We put out so many records, but we also put out so many EPs, singles on compilations, songs for Spotify playlists or songs I floated out for free on the internet and never thought about again. It becomes important to somebody else. They sometimes even ask for Further Seems Forever and Twin Forks songs.

I simply do not plan to do anything. But if anybody asks for anything with enough passion, the synapses just fire, I don’t stop and consider. I say after three chords, “Looks like I’m playing this song.”

Were you surprised by the reaction to the new songs? Heart.Beat.Here‘s comments on Soundcloud are, “A perfect combination of your older music and where you are now,” and “This is the sound we have all been waiting for.”

It has an immediacy where it’s familiar. I don’t know if its the timbre of my voice, the lyrics or the chords. If I knew, I’d probably be trapped in a repetitive cycle of just doing that over and over again. It’s not that I wish I knew and I can’t write a song…those just kind of happen. It’s not some algorithm you should crack. You just get lucky sometimes. Unfortunately, you sometimes get unlucky sometimes. When I’ve been luckiest, it seems to be what I’ve written, and the feeling it represents, coincides with how my fans are feeling at the time and with the way their taste has grown. With the exception of maybe one whole record and a couple of songs here and there, I’ve kind of been in lock step with my audience by sheer blind luck.

Do you relate to those older songs in a different way now?

There are songs that I feel more deeply now because they go through an evolution and because I’m singing them night after night they continue to apply to my life as it is now. It’s like if you read a book and ten years later you ready the same book, it obviously means something very different to you because your life has changed, the book is the same.

“Screaming Infidelities.” I played that song every night for more than a decade. And it has a very obvious top layer. My life experience changes, even directly with that person who I wrote about. That doesn’t mean it’s the same thing to the audience. Sometimes the audience feels something stronger and I can glean it off of them and they push me to that place in time.

“I was lucky to feel anything that deeply ever in my life.”

Are there any songs that feel almost too emo now?

Why do you think fans are proud to like emo again?

I don’t believe they stopped liking it. There were bands at the forefront of what happened. There were the rare bands like Fall Out Boy that kept evolving because that was their taste so they never fell out of the picture. And then there were bands that came much later that felt less potent. There’s a country colloquialism that says, “All hat, no cattle.” That means a guy who wears the biggest hat to represent how much of a big shot he is, but he isn’t who he pretends to be, and that happened. The rest of it was about trying to wear eyeliner. I never put any on, maybe it would look good on me. Maybe I would’ve sold more records—I just never put on the eyeliner.

When do you think the backlash started?

Around that time where the identity didn’t match the music anymore. Bands that were calling themselves emo didn’t quite match the sound and style. The fans of the original stuff stuck to the original stuff that grabbed them. Those people just happened to finish college, go into the workforce and as we all know that’s a pretty busy time. Maybe they didn’t focus on music for a couple years, but now they’re comfortably in their new lives and music is as important to them.

You’ve been organizing Twitter meet-ups during runs on tour. What inspired you to connect with fans this way?

It’s fun because you meet people at clubs they start by talking about what your music means to them, but then it moves to just having a conversation. When somebody sidles up beside you and says, “I saw your tweet, I want to run with you,” the things you’re talking about almost always have nothing to do with why they care about your music. I am interested in what’s going on in the lives of my fan. It’s kind of a fun little con on how to get them to talk about it instead of talking about my songs, which is also lovely to hear but it’s not the only thing I want to know about them.

Have these workouts also helped you connect with other musicians?

In the summer we’ll do a lot of weight sets and that bring all the bands together on the tour. Saosin, The Early November, Taking Back Sunday and us. The excuse was lets lift weights prison style on a hot blacktop in a parking lot, but you find yourself talking about everything under the sun and feeling community. That’s the running theme, going back to how I felt discovering the other weirdos in school. I’m on a constant quest for community. That’s also why I tried to erase that line that divided the band from the audience and still try to. I think moments of community are probably the most important thing that makes us—this is way grand and coming out grander than I mean it—but makes us civilized. 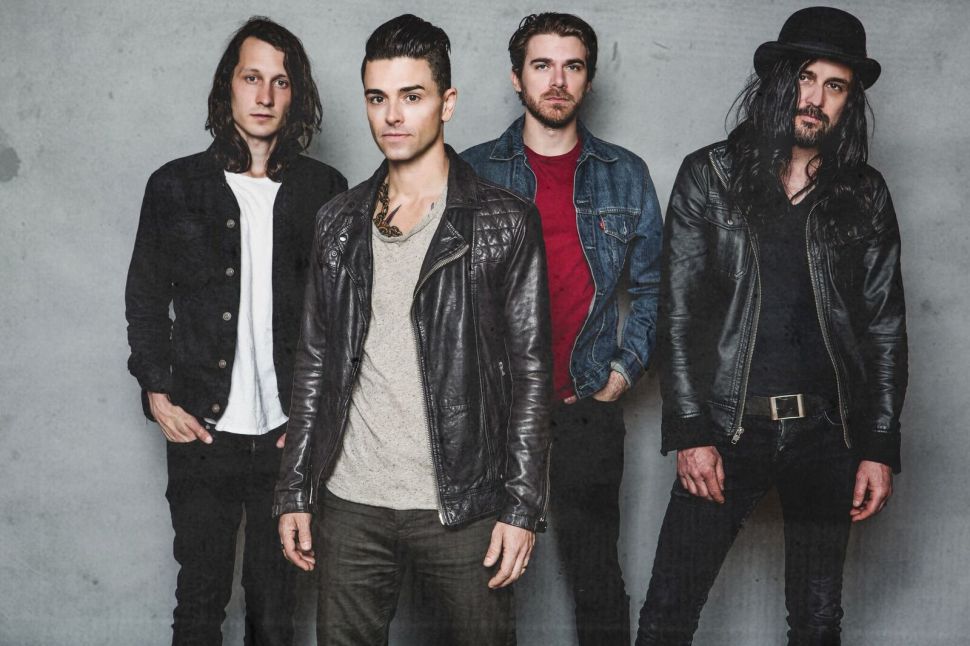