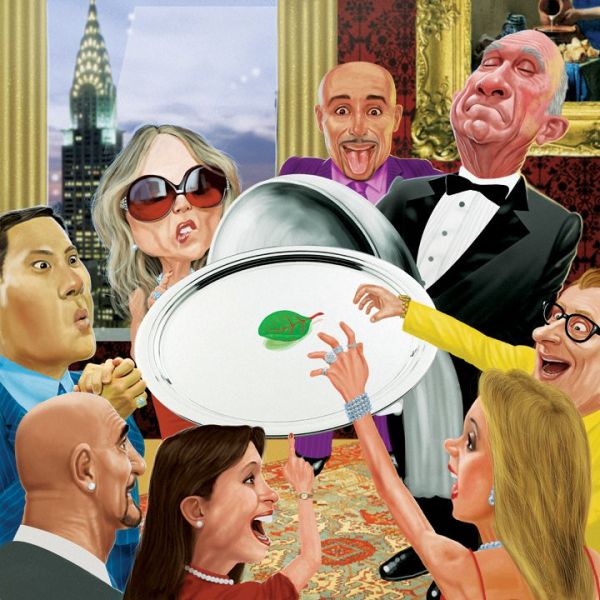 Before the chill, there was the thrill of a lengthy Indian summer which took New York into a balmy LA-style fall. Extended summer temperatures into late November meant less mandatory garments and more opportunities to show off one’s toned, spinned, dieted and yoga’d physique. After calorie and carb control; guns were ablaze and rock hard midriffs blinded the flabulous, making all the denial and hard work worth it. As one friend pointed out at dinner recently “Nothing you can eat is more delicious than being thin and fit.” Mimicking the famous Kate Moss quote of course “Nothing tastes as good as skinny feels”.   That said, a raging new sport has emerged, now defining everything from eating to work- out habits, to couture. I call it Competitive Thinness, or CT SPORTS and it has reinforced the old adage you can never be too rich or too thin, 1% style.

It was a October night at K. McNally’s chic new culinary addition, Augustine: with everyone admiring the vintage art nouveau tiles and authentic bistro interior in the uber-cool Beekman hotel. The French-speaking waiters brought over piping hot baskets of freshly baked pain, which our table admired but promptly sent back because everyone was eschewing carbs for more high protein fare.

“Wait!” Madison Avenue Millionairess declared, “Before it goes back, everyone just inhale. It’s a great trick and makes you feel like you ate the bread, but didn’t.”

“That’s a good one. Another tip is to just take a piece of crust and then send back the basket.” Cash and C-Harry offered, “Crust has less calories. And the crunch makes you feel like you’ve eaten the whole slice.”

“Have you seen so and so?” asked Hedge FUN-der of the crew, meaning a previously porky magnate who had seemingly lost 75% of his body weight. “He’s a shell of his former self.”

“Is he well? I thought he might be ill. I have never seen such a dramatic weight loss.”

“No, he’s totally fine. He just had gastric surgery and is working out twice a day.

“Oh, that’s good to hear.” Two gents in the group suddenly looked crestfallen over the thought that one of their portly peers, instead of being carted away to the ER was now skinnier than themselves. Subtle remarks started flying, as anticipated.

“Well, he looks like he needs a milk shake and some fries, if you ask my opinion” Ari Bitrage said, massaging his stomach to monitor his body fat.

“ I think he’s aged 100 years with all the weight loss and now has sunken cheeks.” A member of the Intl. Playboy Posse observed.

“He can always use my dermatologist. She has an injection that gives you big, apple cheeks so you look youthful and refreshed.” Madame Millionairess offered.

“ I heard there is also a procedure where they take the fat from your derriere and inject into your face.”

“ I could use that” a chorus of women and a few men nodded in agreement.

“That’s the ultimate diet play; take it from where you don’t need it and inject it

where you do” Ari agreed.

“My grandmother used to say you either lose it in your hips or your face” Millionairess observed.

“I beg to differ.” I interjected on the topic of the portly one. “He’s worked hard and looks great.” I added, providing a lone voice of dissent. Once the offending bread basket was banished to the kitchen, the waitress returned to take orders. There was that moment of pause; of keen observation where everyone waited to see what everyone else was doing; whether they were going to indulge and break their diets. With all the talk of Porky now being skinny, each guest retreated to the customary protein and veggie dish. Special requests such as “prepare the fish dry or substitute olive oil for butter” or “ everything on the side” was a common refrain. It was clear to me that former Porky Magnate’s dramatic weight loss and mansformation had sparked a competitive nerve in our ordering. Only one brave, lone diner ordered the pommes frites (avec homemade Mayonnaise). Once the delectable frites arrived, a few other diners caved due to the wafting smell forcing capitulation; resulting in one extra order of fries, which was quickly devoured. Cries of “I need a double session at Barry’s” were subsequently heard round the table.

New York, LA and Miami have morphed into cities where fat is considered an undisciplined weakness among the 1% and is viewed with distinct disdain.  However, it wasn’t always so. As a young boy, many of the so called “moguls” I met through my father were on the Las Vegas diet plan;  martinis and shrimp cocktails, thick, juicy steak and chops, baked potatoes loaded with sour cream and hash brown potatoes not to mention sides of creamed spinach and French fried onion rings, all devoured in one sitting. I recall after-dinner pats of the stomach and humorous but self -deprecating groans . The women may have been thin and bird-like but a man showed his success and bankbook through other rolls, as well.

Years after, in my late 20’s I attended a cocktail party at the house of one of America’s most famous television personalities; the loveable sidekick of one of an iconic talk show host. My first ad agency had opened an LA office (strangely) in his home; his last wife working in the new business area for our firm. No one was more gracious and larger than life than the affable announcer. As size meant power back then, he and his famous friends were very large moguls indeed. Dana and I attended his (ahem) 69th Birthday party, where many bold face names turned out at his Beverly Hills Aerie. What struck me was the size and girth of many of the guests. Large men and women with larger-than-life jewels abounded. That evening, he introduced to one of LA’s most famous and richest power couples. The titan’s power and influence was cemented by his legendary assets and girth. There was an unforgettable level of respect, bowing and scraping as he and his wife entered the room, preceded by his immense stomach and her immense hair and huge diamonds. My, how things have changed!

Biblioquet is one of the few uptown restaurants that has a downtown frisson. I was having a pre-holiday dinner with a group I call the sexy spinners for dinner: these are a group of women and their husbands who work out and play equally hard. When I brought up the issue of competitive dieting, everyone immediately went into denial mode before they cracked and the truth finally emerged.

“No, I’m just competitive with myself” the chorus initially protested.

“ Look, you can all say that because every woman here has a gorgeous figure. Why is that?”

“They wouldn’t be here if they didn’t” Real Estate Rock Star laughed.

“ Competitive women drive men to be competitive, i.e ‘You shouldn’t have that late night snack. You’re going on vacation soon and will be in a bathing suit.’ It’s keeping the libido/ego in check” he shrugged.

“Another round of tequila for the group” I added, trying to entice my guests into verbal lubrication.

“Look, if I were going away tomorrow on a sun vacation with him” Real Estate Rock Star pointed to Mr. Fit- Bit, who sports a teenage physique “I would not be eating those fries because he is so in shape. But if I was going away with “Porky Player” I wouldn’t care and order more fries as he is never going to be thin and I will look good in comparison, no matter what I do.”

“ I work hard to maintain my figure” Skinny Minnie said between sips “However, I eat what I want but only have one or two bites.”

“What kind of rumors?”

“ I ‘ve heard it all. Like they will accuse someone of taking out ribs to have a smaller waistline or that they exist on air or are anorexic.”

“And, let’s not forget if someone really has an issue with you….(dramatic pause) they will send you a box of chocolates!”

“That’s the meanest” the women nodded in agreement at the thought of such a heinous act.

“It’s like the horse’s head in the G-dfather” I nodded.

“ Yes. I’m also offended when someone sends me a gift, maybe a blouse in a size 4. I find that insulting.”

“Me too. Who would have the nerve to think I am a size 4???” All the women nodded in agreement.

“What about your men?” I asked.

“I have a theory that men embrace the scale and women fear the scale.” Skinny Minnie said. “Okay, when I weigh myself I take off my thong. I always think it weighs like 4 pounds.”

“I take off my underwear” the men nodded.

“ I have to admit I take off my glasses.” I offered up to the confessional.“ You see we’re all crazy. My ongoing motto is “ it’s not how thin I am, but how fat I would be” everyone nodded about winning that genetic lottery.

“You know that my favorite day for weighing myself is after a colonoscopy” Real Estate Rock Star added.

“Speaking of vacations. Richard, do you really need those fries—you have to be in a bathing suit tomorrow?”  Dana patted my hand, taking the fries out and eating them.

“That’s because you’re a size zero. It’s so unfair” 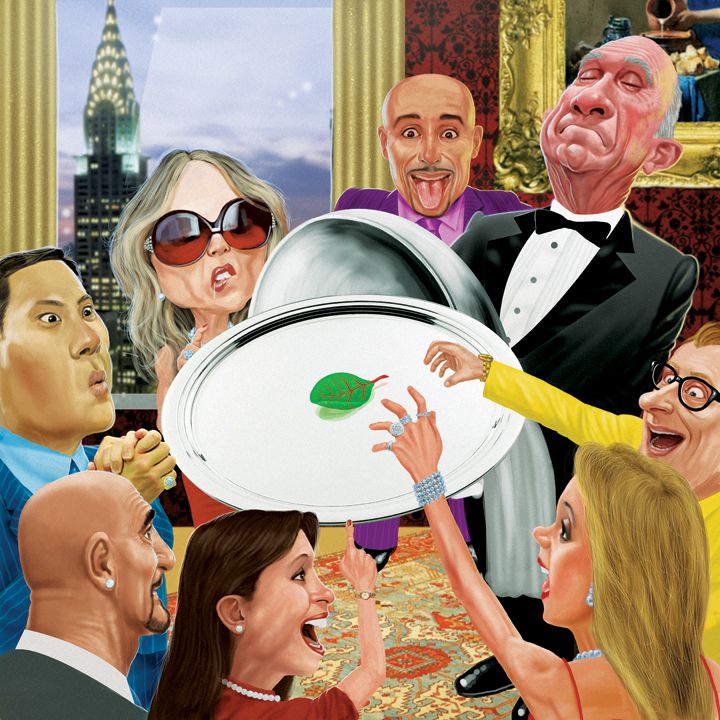