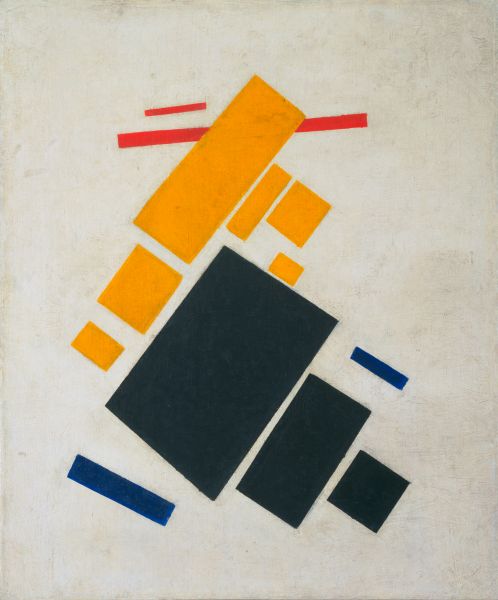 Looking at Russian art, you’re almost always looking at Russian politics, a point which is taken for granted in “A Revolutionary Impulse: The Rise of the Russian Avant-Garde” at the Museum of Modern Art.

It’s the centennial of the Russian Revolution. The years before the revolution were that of rebellions and world war. After the Bolsheviks seized power, a honeymoon (if that word can ever be used in that period) led to a hardening. The most important artist of that time, Kazimir Malevich (1878-1935), the pioneer of Suprematism, would end up drawing sentimental portraits. Some artists did not live long enough to see their new government persecute the makers of a new culture.

Artists never had much power in Russia, or in the early Soviet Union, but for a while they had the power to experiment. We see examples of this experimentation currently at MoMA, in works drawn from the museum’s collection.

Just outside the entrance to the exhibition is a series of prints called the War Portfolio, by Olga Rosanova (1886-1918), an artist and activist whose images of conflict incorporate cubism, surrealism and traditional styles. All was in the mix back then, and war itself had a way of mixing things up in unexpected ways. Rosanova depicted soldiers, cities under fire, and a landscape of battle where war took that landscape into abstraction. There’s a tension between emotion and control in her work, which veers into emotion,and a palette that makes many of the scenes seem to be on fire. Rosanova died of diphtheria in 1918 before she could take her work any further. It was the same year that an Austrian soldier named Egon Schiele died of influenza in Vienna.

Just inside the exhibition, we see where some artists were heading. Lyubov Popova’s Untitled (1916-17) is a circle and square in white, an indication that artists were abandoning the elements of painting, even though white rectangles there look a lot like a cross. It’s too much to say that they abandoned the traditional practice of art in the same way that the revolution would abandon the traditional structure of the state. Yet for a while, art and armies seemed to be in synch, or at least some artists thought so. Popova (1889-1924) would also die young. 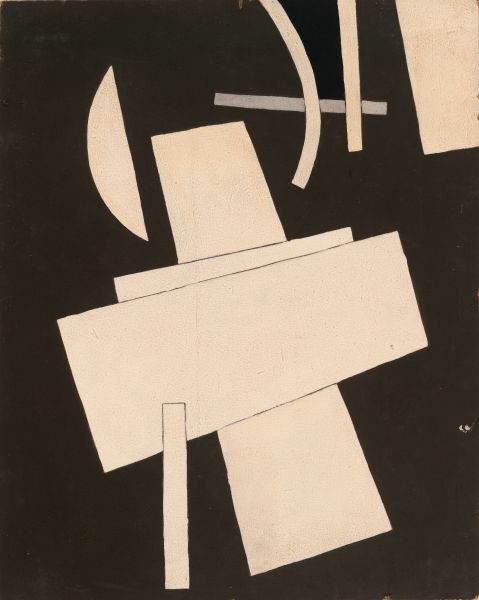 One of the many movements that artists gave a name to then was Rayonism, founded on the notion that intersecting rays of light gave a painting a power that the ordinary depiction of nature could not achieve. There’s a selection of work by wife and husband Natalia Goncharova and Mikhail Larionov. In the struggle to go beyond representational painting, Goncharova’s work looks like landscape traversed by jagged lines, while Larionov’s Rayonist Composition: Domination of Red (1913) is just what it says it is, an intersection of color.

1913 was a year before Europe exploded into war. MoMA owns Samovar (1913) by Kazimir Malevich, a typical provincial imitation of the kind of Cubist painting that could have been found in Paris since 1909. A year later Malevich was painting cubes and lines and circles and balancing them in ways that had no relation to anything but geometry and the will to make something new. Malevich called his art “Suprematist,” hoping that it would have supremacy over forms found in nature.

El Lissitzky (1890-1941), a contemporary, would join Malevich in abstraction, with long rectangles in compositions that had more spatial depth than those of Malevich. Both men taught at an adventurous school in he city of Vitebskin the city of Vitebsk.

To our eyes, Lissitzky’s forms might seem like elements for the assembly of a sculpture. There’s not much sculpture in this exhibition. Sculpture was hard to preserve, and scarce metal could always be recycled. Yet there’s a sculpture by Vladimir and Georgii Stenberg that looks like a scaffolding, again calling to mind the notion of a work in progress.  The Stenbergs would eventually move on to making film posters, popular designs that could be produced in the thousands and put on any wall. It was art for the people that promoted other art for the people. 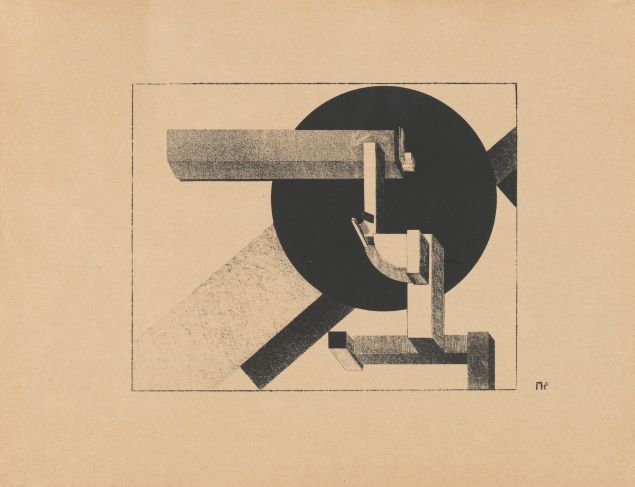 Lissitzky would describe his works as examples of Proun (pronounced pro-oon), a Russian acronym that stood for “project for the affirmation of the new.” Proun’s goal was “a new form that grows from soil fertilized from the corpses of the painting and its artist.” Talk about Miracle Grow.

Proun 19D, an austere collage of paper and paint on plywood, points to where Lissitzky thought art should be headed.

Here’s one of his many declarations about the art of his time: “The (painted) picture fell apart together with the old world which it had created for itself. The new world will not need little pictures. If it needs a mirror, it has the photograph and the cinema.”

MoMA’s collection of photographs and films from the Russian Avant Garde seems deeper than its paintings and drawings from that movement. Visitors walk through projections of clips from films by Sergei Eisenstein (Potemkin, 1925) and Dziga Vertov (The Man with the Movie Camera, 1929), classics that show the undeniable appeal of film that could be brought to mass audiences that were drawn to the new medium. Vertov knew that his viewers were fascinated with this new technology, and made sure that the seams as he filmed camera crews shooting in the streets. He wasn’t above dazzling them with the tricks of his machines. Those machines would now be observing daily life, changing how people saw and how they behaved.

Photography would also bring new subjects and jarring new perspectives to Russian art. Aleksandr Rodchenko  (1891–1956) , represented by more works than any other artist in the exhibition, positioned his camera on the roofs of buildings to get a new geometry of space. At a time when the official rhetoric spoke of the empowering of the masses, the people in Rodchenko’s photographs often looked small and confined by their surroundings. Assembling for a Demonstration (1928-30), the observation of a gathering in a small square, suggests in its tiny figures viewed from above that Rodchenko may have been on to something about the way power works. 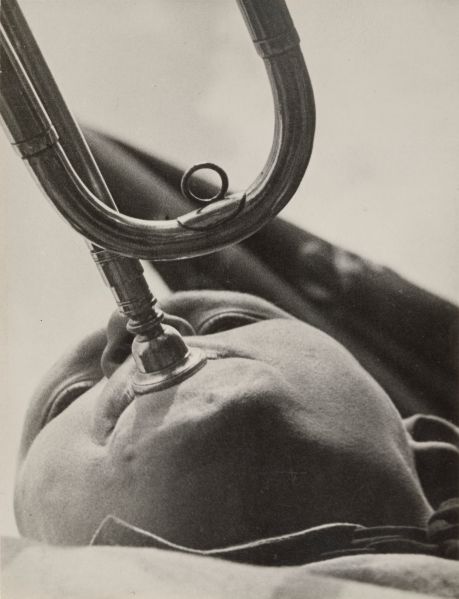 Aleksandr Rodchenko’s Pioneer with a Bugle. The Museum of Modern Art, New York

And power often sees itself through architecture. Proposals for a Monument to the Third International by Vladimir Tatlin and Nikolai Punin (1920) and Aleksandr Vesnin (1921) show a dreamy side to the Avant Garde and to its hopes for a new architecture. Thousands more existed on paper. Like the revolution that these artists sought, most of these designs were never realized.

“A Revolutionary Impulse: The Rise of the Russian Avant-Garde” takes us into the late 1920’s and early 1930’s, when the revolutionary impulse became something that savvy Russians learned to suppress, in art and everywhere else.  For a centennial like this one, you wish that a major museum like MoMA had reached beyond its own storerooms to mark it. Yet there’s enough on view to remind us that, for a while, the imagination had a privileged place in that society. 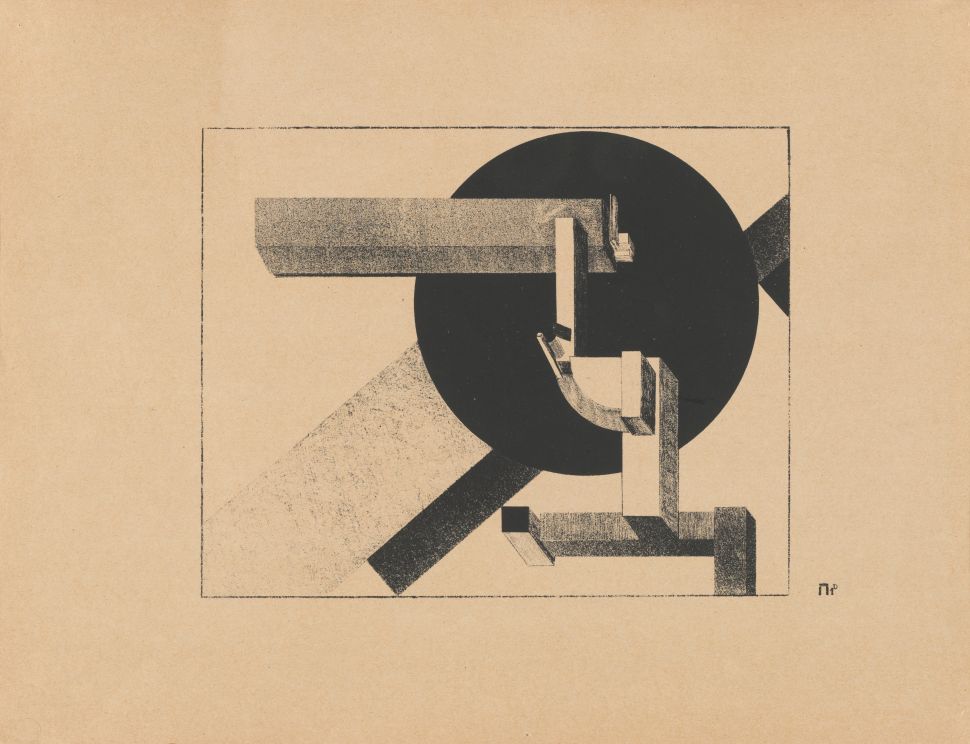