Welcome to our TV Fashion column, where TV Ate My Wardrobe‘s Emma Fraser discusses the trends in television apparel. This week: Callbacks to the color blue on Crazy Ex-Girlfriend.

Song is not the only thing that gets reprised on Crazy Ex-Girlfriend, and when Rebecca finally gets the guy of her dreams a costume call-back points to how hard it will be to keep up with these romantic expectations. When we first met Rebecca, she was working in New York for a big law firm and despite career success she was feeling trapped. Yes, part of me wants to quote the lyrics from the season 1 theme song to explain just how Rebecca was feeling, and the opening credits are also important to the outfit in question.

Rebecca’s lawyer attire in West Covina features a lot of prints, sleeveless blouses and dresses that suggests a more casual vibe than your average New York law office. The black blazer she wears in the opening scenes of the pilot is far more Alicia Florrick, and the blue sheath dress wouldn’t look out of place in the offices of Florrick, Lockhart and whoever. It is somewhat boob restrictive in its tightness, with a slit up the skirt, and when Rebecca hits California the color of this dress stays the same with some additional glitter on the skirt, but the shape changes.

Costume designer Melina Root does a really great job of picking two almost identical garments with some important changes beyond the additional shimmer; the skirt is fuller (all the better for dancing in) and her black pumps are replaced by sparkly shoes.

A variation of this dress also appears in the season 1 opening credits tying its association to Rebecca’s big Josh inspired move – no matter how many times she denies Josh is the reason – and another blue frock has strong Josh Chan relationship implications as this happens to be the color she is wearing when they hook-up at his sister’s wedding. Blue dresses and significant Josh Chan relationship moments go hand in hand.

Cut to season 2 and in the most recent episode “When Do I Get to Spend Time with Josh?” Rebecca and Josh are now an actual thing; not just a couple of convenient sex and a place to crash, but with real declarations and everything Rebecca has been dreaming about since she ran into him on the street in New York.

The love bubble they are in mimics Rebecca’s arrival to West Covina in the pilot from the location where she gets out of the cab, the appearance of graffiti artists, the same bench ad and the pretzel snack of choice. And even if Rebecca doesn’t end up swinging from a giant pretzel she is wearing a very familiar outfit right down to accessories and makeup.

Rebecca’s fantasy has become her reality and they’re a couple who wear matching blue koala pajamas and utter their “I love you” sentiments while entangled in each other’s limbs just like a couch version of Twister. They plan to do the things they talked about when they were at camp all those years ago and their relationship is rooted in teen dreams right down to the activities.

Josh calls into work sick so they can spend the day at a park, but Rebecca’s schedule isn’t quite as flexible as she hoped and real life is already getting in the way of the bubble. What this does is expose weaknesses in their burgeoning romance and while the fantasy of Josh has always been that he is The One, he is very much a symbol of a far simpler time. Rebecca’s move to West Covina was inspired by Josh, but it was also an escape from working in such a relentless and soul sucking environment. It is also not a coincidence that the minute Rebecca gets everything she wanted romantically another aspect of her life hits the skids. This underscores why Josh is not the answer to all her problems.

Now a familiar level of toxicity has come to this work place and the arrival of antagonist Nathaniel is an unexpected obstacle for Rebecca. Nathaniel cruelly deconstructs Josh’s whole park look by calling him a “human flip flop” and Rebecca’s attempts to dismiss this sartorial mockery fail because Nathaniel has got in her head. And in saving the jobs of her co-workers she’s pulling out all the stops including getting dirty (quite literally for Paula in the graveyard) and enduring sleazy dude remarks as she will reluctantly let “ample bosom” observations slide if this gets them new business. In fact Rebecca seems to enjoy both the challenge and getting her hands dirty so much so that she recreates her angry squirrel move on Josh later as part of a sex game.

Going back to Rebecca in blue and her wardrobe shifts to purple and pink when they step out of their love bubble. First her park outfit (which never sees the ) followed by her Vera Wang floral dinner frock. This dinner is where Nathanial’s impact hits and every dismissive and disparaging comment plays on a loop in her head while Josh’s words turn into “blah, blah, blah” and “boop-be-doop-be-doop” playing into her new found fears. It is also worth noting that Nathanial’s tie and suit very much complement Rebecca’s Vera Wang when she attacks (she’s still wearing it the next day because grave robbing reasons) him with a pen.

Where Greg challenged Rebecca and very much seemed to be on her level both intellectually and neurotically (their downfall) the whole thing with Josh is already at the emotionally needy text level. Josh really needs to take it down a notch because otherwise the awful, but handsome new boss is going to become the next object of affection. The self-loathing will be strong, but the chemistry is hard to deny.

So many different conflicts are at play here and as Crazy Ex-Girlfriend enters the final part of season 2 (it also just got renewed for season 3) Rebecca will have to confront her whole world view that Josh Chan is the guy for her and we have previously seen how good she is at denying what is right in front of her.

The job of the theme song has been to spell this out; last year she denied the real reason why she moved west and now she is championing her love for Josh. But what if the latter isn’t actually true? A Rebecca not in love with Josh would be a twist I would welcome and the reality of being with Josh beyond sex might be the push Rebecca needs to realize that he isn’t the one for her. If this is in fact the case, and season 3 moves in a non-Josh Chan obsessed direction, then I will be very excited to see just what Rachel Bloom has in store for Rebecca even if it means hanging up that fabulous blue dress. 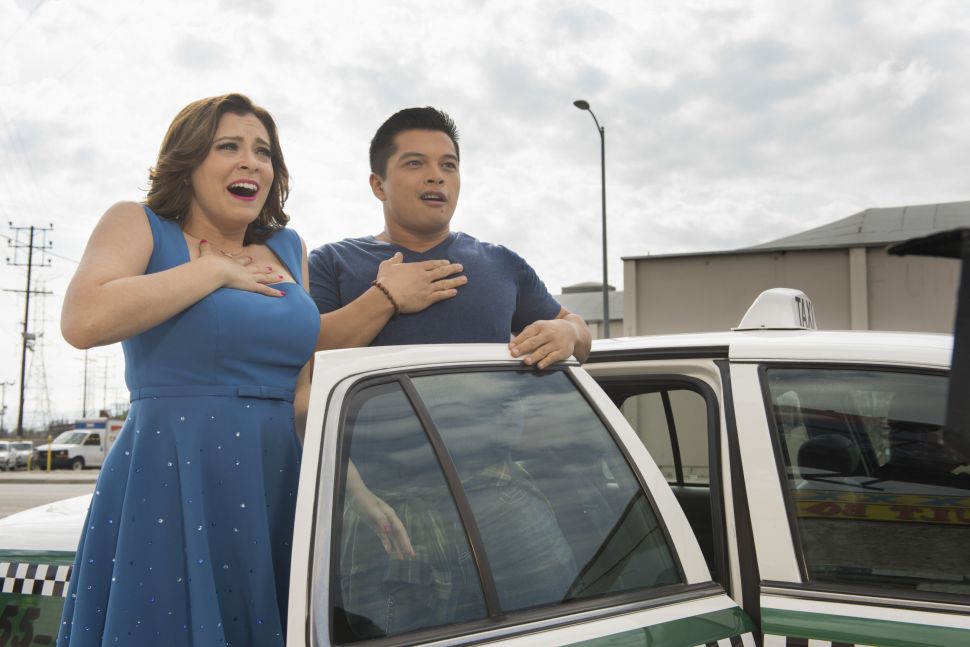