Washington D.C.—What was supposed to be a peaceful gathering of protesters from across a broad spectrum of social movements blocks away from President Donald Trump’s inauguration, turned into a chaotic and violent clash between riot police and anarchists with the media and demonstrators caught in the crossfire.

Just blocks away from the National Mall, where many gathered to observe the day’s festivities, there was a small gathering by the nearby Columbus Fountain of those protesting President Trump’s administration. There was no single issue highlighted, just folks who were there for their own reasons. One man shouted for peace with Russia, a mom and daughter drove up from Florida to hold signs in support of Planned Parenthood, and there were too many socialists to count. Not the Bernie Sanders kind either.

It was a stark contrast to what would occur later, as about two-dozen masked anarchists shattered windows, destroyed public property, and smashed concrete to lunge heavy bricks at police while those in the vicinity suffered painful burns and chest pain from pepper spray and tear gas.

Things took a turn at Columbus Fountain when one of the organizers got on a loudspeaker and called for the crowd to march to the White House. For a few blocks, it was routine. The crowd chanted in solidarity with Syrian refugees, Black Lives Matter, and Planned Parenthood. They shouted “No Trump! No KKK! No Fascist USA!” and even peppered in “Fuck Trump!” here and there. The crowd continued to grow as the march went from block to block with no clear dominant activist group or social movement. The crowd was extraordinarily diverse. Even children marched. The march had a few clear leaders that were keeping the protests civil and peaceful.

Washington, D.C. police seemed caught off-guard by the growing march, and a few tried to help when busy streets were being blocked. When D.C. police were finally mobilized, they attempted to alter the course of the march by claiming there was a “suspicious” vehicle ahead on the next block. They didn’t point it out, but claimed there were frayed wires sticking out of the trunk. No one seemed to buy it. Not the media, not the marchers, and especially not the organizers. The march pushed passed the trickling of police who were making those claims at the entrance of Chinatown and continued marching.

A few blocks along H street, the crowd suddenly doubled in size as they converged with another march coming down the same street from another direction. The crowd erupted in cheers as they were joined by the other marchers who seemed to be focusing on Syrian refugee solidarity and immigrant rights.

Not too long after, the organizers spread word that the more official groups would be ceasing their part of the march, and those still there would be free to keep peacefully demonstrating if they please. That’s when things became chaotic. Word spread fairly quickly that a few dozen protesters from an earlier march who may have been involved with window smashing and other property destruction had been detained.

On the corner of L and 12th street stood a couple hundred cops, most of them wearing some type of riot gear, forming a perimeter around the few dozen demonstrators. They were boxed in by police who used their riot shields to keep them from escaping. The marchers circled the police and demanded their release. The ordeal lasted about an hour, and the demonstration attracted those who had no intention of keeping the peace. They were noticeable, wearing all black and covering their faces. They taunted the police and called for violence against them.

The peaceful protesters began to try and shout them down, calling for peace. But more and more of these self-proclaimed anarchists began to show up and be disruptive, and even inciteful. Things seemed to be looking up when another march made its way to the corner to magnify the voice of the crowd calling for the release of those detained. But as soon as they got there, the area became unsafe for everyone. I’m unclear as to what exactly ignited the chaos, but one moment I was shooting a video on my phone, and the next, I was being burned by pepper spray.

My colleague Joey Roulette, whose photos you see in this dispatch, was sprayed almost directly in the eye and suffered in the moments after the police attacked the crowd of peaceful protesters and media. A college professor who was attending the march spent about 30 minutes flushing his eyes with and solution. According to Roulette, who was standing about 5 feet away from myself, a young woman who was dancing to drums being beaten by musicians in the crowd, went closer and closer to the line of heavily-armed riot police and began making provocative gestures. This may be why the police felt the need to use force against all of us.

The situation was frightening. There were seniors and children in the crowd, and many people fell to the ground when the police launched the first of many flash grenades. Along the street, lines of people cried and screamed as the pepper spray burned their eyes, mouths and skin. Reporters were hustling to help get each other out of the line of fire, but almost all were affected in some way.

What the fuck. This is turning into chaos I'm dodging pepper spray, tear gas and now flash grenades. #Inauguration pic.twitter.com/gkxQTFy4ne

After the police used force against the peaceful protesters, the anarchists began what seemed like a pre-planned attack. They were organized, communicated orders to each other, and took action almost immediately. Some moved benches and other city property to the middle of the street to slow the march of the riot police towards us. Their cohorts took hammers to the road to break up rocks and pelt them indiscriminately toward the marching police. Many of those heavy pieces of concrete landed near peaceful protesters.

The final moments as I experienced them felt like a battle. My face was burning and my eyes were ringing from the regular pops of the flash grenades going off around me. One of those spent grenades came flying right for me right after it went off. Police choppers hovered overhead and tear gas containers continued to fly toward the crowd. The riot police marched from two directions on L street shouting “move back” in unison. At the front lines were a few brave journalists, and the anarchists who called for many to “keep fighting!”

Reports from the area following my own painful departure included the fiery destruction of a Fox News-owned limousine and the vandalization of a Starbucks that was in the area.

Robin Seemangal focuses on politics, NASA and advocacy for space exploration. He was born and raised in Brooklyn, where he currently resides. Follow him on Twitter @nova_road 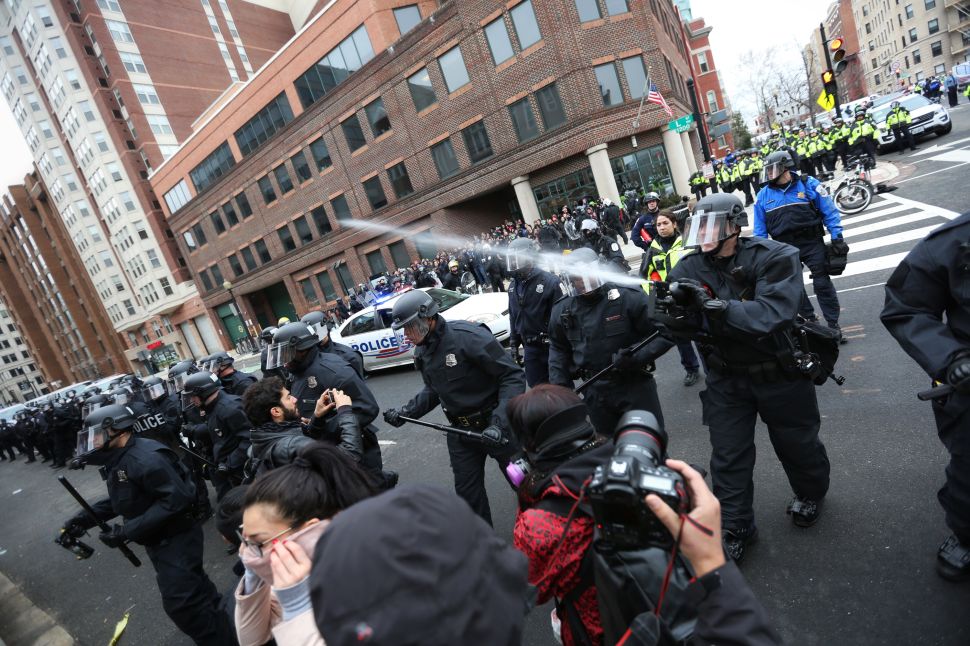