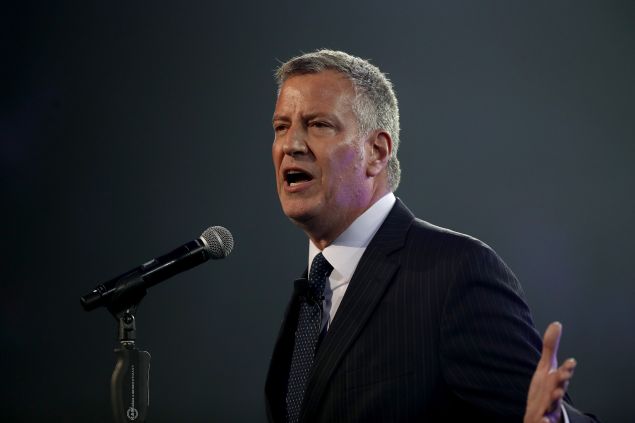 Mayor Bill de Blasio vowed again yesterday to fight President-elect Donald Trump‘s controversial proposals targeting undocumented immigrants and Muslims, but indicated he was open to working with the incoming administration if it has a “real plan” to tackle infrastructure and other critical issues.

Appearing on his weekly “Mondays with the Mayor” segment on NY1, de Blasio insisted again that the Queens-born businessman does not have a “clear electoral mandate” given Hillary Clinton won the popular vote by almost three million ballots. This, the mayor said, is just on reason he believes people are “gonna stand up and fight back”—including himself, at a rally planned for Thursday night with the Rev. Al Sharpton.

But the liberal Democrat said that he has stayed in contact with Trump and members of his team, and that he is open to working with them if they are serious about solving New York’s infrastructure challenges and other issues facing New Yorkers.

“If they’re ready to work in good faith on infrastructure and creating jobs in this city and other cities, I will meet him, I will be willing to work with him if it’s a real plan and on other issues as well,” de Blasio continued.

De Blasio maintained that is not a reversal—and that he and mayors all over the country plan to stand up for their residents given that “his stated policies would hurt us immensely.”

“I don’t think that’s a contradiction—in fact, I think the Trump administration will recognize the strength of people standing up all over the country and will have to address it,” de Blasio added. “I think laying back would be exactly the wrong thing to do at this moment. It wouldn’t win the respect or the recognition of a new administration if cities all over the country took the situation lying down.”

Indeed, he said that he doesn’t deny how the Electoral College vote or the state-by-state vote count transpired but insisted that there were unusual events during the election, such as the involvement of the Russian government “in such an overt way” and Federal Bureau of Investigation Director James Comey’s letter to GOP Congressional leaders about new emails his agents discovered related to their probe of Clinton’s private server in the last week and a half before Election Day—and his subsequent announcement that there were still no charges to bring against Clinton.

The mayor also stressed that there is fear about what may happen under a Trump administration.

“I think that’s why you see some of these Congress people asking this question,” de Blasio said. “I think it’s a matter of individual conscience obviously but it’s fostered by the fact that we’ve never been in a situation like this before.

The mayor called Lewis a “true definitional American hero,” and said it would have been “a lot more presidential” for Trump to show him more respect.

De Blasio is headed to D.C. today to attend a U.S. Conference of Mayors event. The conference will address infrastructure—an issue on which there is the most agreement among the mayors—among other matters.

Trump has proposed a $1 trillion infrastructure program, but one far different from that favored by Democrats. The Republican plan would provide massive tax breaks to investors who sink cash into public goods, and then permit those private parties to charge tolls to consumers to recoup their money.

Leading Democrats like Senate Minority Leader Charles Schumer have warned that this proposal would be insufficient for large-scale projects, and could lead to the privatization of bridges, roads, tunnels and transit systems.