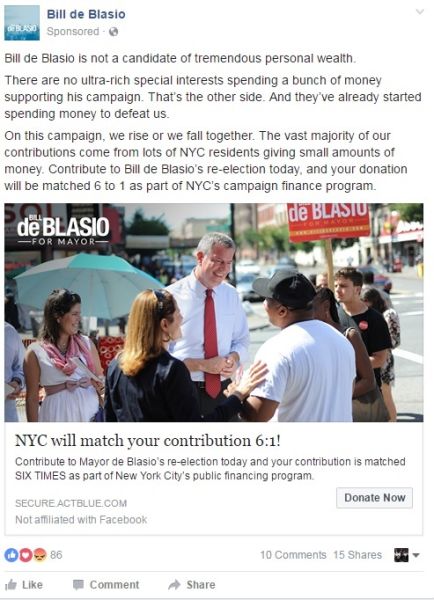 Mayor Bill de Blasio is again reminding voters he doesn’t have a multi-billion-dollar bank account like his self-financing predecessor, former Mayor Michael Bloomberg—and is asking supporters to make up some of the difference, as he seeks a second term amid scandals surrounding his past political fundraising.

The mayor’s campaign, which had $2.24 million in its coffers as of last report, made the appeal in a new sponsored Facebook post. It alluded vaguely to nefarious interests conspiring to undermine his progressive vision for the city, possibly referring former Bloomberg campaign manager Bradley Tusk, who started the group NYC Deserves Better to promote an anti-de Blasio message—and to attempt to draft city Comptroller Scott Stringer to challenge the mayor in the Democratic primary.

“Bill de Blasio is not a man of tremendous wealth. There are no special interests spending a bunch of money supporting his campaign. That’s the other side. And they’ve already started spending money to defeat us,” the Facebook post reads. “On this campaign, we rise or we fall together.”

The message also mentions the city’s matching funds system, which effectively multiplies sevenfold every donation of up to $175 a candidate receives from a resident of the five boroughs.

Despite the post’s populist pretensions, the mayor has received the maximum $4,950 donation from a number of moneyed individuals, including liberal billionaire George Soros and his son Alexander, property investor-turned-President-elect Donald Trump adviser Howard Lorber and commercial mortgage broker Robert Verrone. Among the many major real estate developers who kicked in the largest possible amount are Alexander Durst, William L. Zeckendorf, Alexander Witkoff and Donald Zucker.

And while he doesn’t possess anything like Bloomberg’s lavish Upper East Side townhouse, de Blasio does own two properties individually worth more than $500,000 in decidedly bourgeois Park Slope, including his family home. The mayor has three outstanding mortgages, but he derived rental income in the range of $59,000 to $161,000 from eight tenants, according to disclosure forms.

He also draws a $225,000 annual salary as mayor—which will jump to $258,750 if he wins a second term, thanks a raft of pay hikes for elected officials approved last year.

At present a federal grand jury is contemplating evidence the mayor and his team used his now-defunct Campaign for One New York nonprofit to run a corrupt pay-for-play scheme, in which donors received favors from the city. A second grand jury, impaneled by Manhattan District Attorney Cyrus Vance, is deciding whether de Blasio and/or his aides conspired to circumvent campaign contribution limits for the Democratic State Senate candidates they unsuccessfully sought to assist in 2014.

The mayor has denied any wrongdoing. 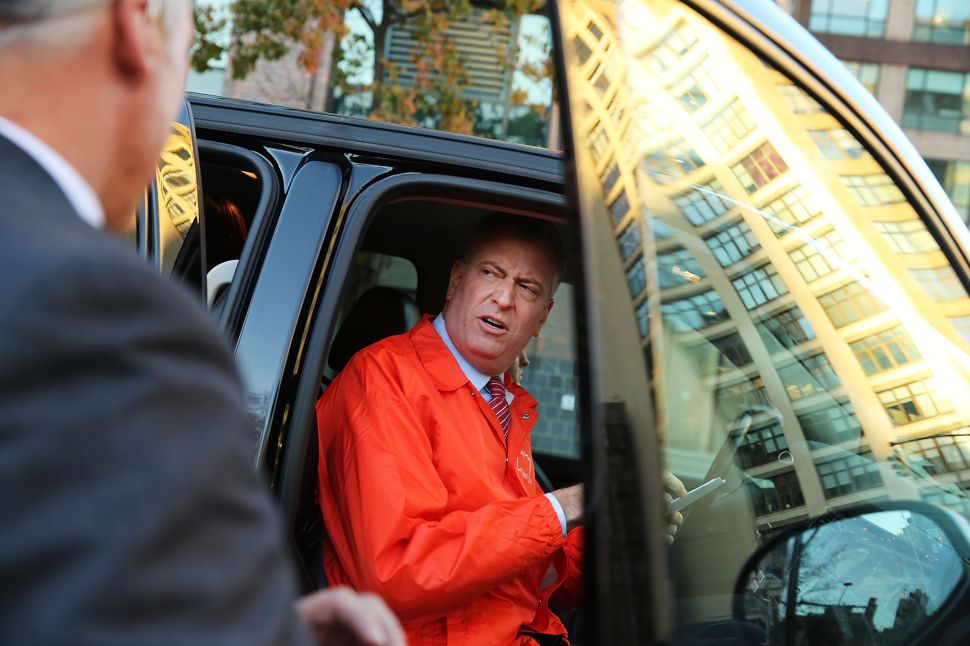