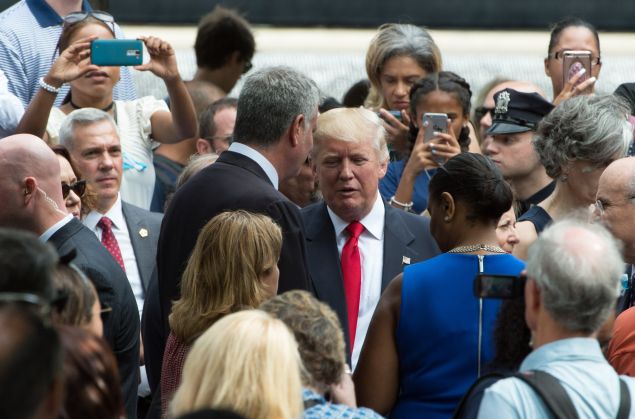 Mayor Bill de Blasio insisted today that his refusal to accept questions from the New York Post last October on the grounds the paper is a “right-wing rag” was absolutely nothing like President-elect Donald Trump’s declaration last Wednesday that he wouldn’t take questions from CNN because the channel is “fake news.”

Trump lashed out at CNN as “terrible,” “rude” and “fake news” when reporter Jim Acosta attempted to ask a question at a press conference last week. The event came a day after CNN and the website BuzzFeed released an unverified intelligence dossier that alleged the Russian government has footage of Moscow prostitutes urinating on a hotel mattress for Trump’s entertainment.  At a press conference on the city’s rent freeze program last year, de Blasio ignored Post bureau chief Yoav Gonen’s multiple attempts to ask a question, and said that he would only call on “real media outlets.”

But when New York Post reporter Michael Gartland asked the mayor today at an unrelated event if he saw any parallels between the incidents, the mayor dismissed it as an “apples and oranges” comparison.

“As you know, there’s plenty of times I call on you and other reporters from the Post and take the questions,” de Blasio said. “I just can see an act that’s partisan when I see it. That being said, to say to outlets wholesale that they can’t be in the room or they can’t ask questions is ridiculous. I’ve never practiced that and it’s absolutely unacceptable.”

He argued he could tell when a news organization was running a “particular strategic play,” and said he would call it out. He added that the Post is “no stranger to such propagandistic efforts.”

But the October press conference wasn’t the first time the mayor refused take a question from Gonen. Last September, when Gonen tried to ask a question about whether Joseph Garcia, president of the US Corrections-Special Operations Group, has a background in corrections or law enforcement, de Blasio cut him off.

The mayor then attacked the “propagandistic newspaper” and said he’s “not playing this game.”

Gonen attempted to ask him what was “propagandistic” about his question, the mayor spoke over him and called on another reporter.

When a New York Times reporter attempted to chime in today and ask a follow-up question, de Blasio jokingly cut him off and criticized him for interrupting Gartland.

“Hold on, he’s asking—could you not interrupt the New York Post, please?” de Blasio said, jokingly but slightly sarcastically as people in attendance laughed. “I find that—you know, I know the Times thinks it’s important but I find that disrespectful.”

And when Gartland asked him whether he is setting a dangerous precedent by arbitrarily determining who is or isn’t allowed to ask a question and when, de Blasio said that it “has to be very personal.” The mayor asserted there have “many hundreds of such occurrences I imagine” where he has called on Post.

He continued that the Post‘s parent company, News Corp, “has a vast ideological agenda that it pursues worldwide.”

“But that doesn’t mean there aren’t plenty of other times when you ask a perfectly straight up news question,” de Blasio continued. “I’ll take those. But what Trump has talked about is a very different reality of potentially banning outlets altogether or never taking their questions. That’s unprecedented and from my view unacceptable.”

The mayor’s refusal to take a question from Gonen stemmed from a Post story about the administration hiring 264 special assistants that described Victor Calise, commissioner of the Mayor’s Office for People with Disabilities, the highest-paid special assistant, as a “crony.” At the time, he said he would take questions from Post reporters in the future.

When a Gotham Gazette reporter yelled out that the mayor did not know what Gonen was going to ask that day, he refused to comment further on the matter.

“Again, I’m not going to re-litigate this,” de Blasio said. “I strongly believe I understood what was going on.”

The mayor also accused Comptroller Scott Stringer of teaming up with the Post last month to create “fake news” when the outlet revealed Stringer’s findings that the city’s Administration for Children’s Services flouted its own protocols in roughly 2,360 high-priority investigations.