The order—one of two the Republican commander-in-chief signed this afternoon—demands the hiring of several thousand new border guards and Immigration and Customs Enforcement officials, expands deportation priorities to include any person charged with a crime and calls for a halt to Washington dollars flowing to any “sanctuary city,” though it does not define that term. The other executive action seeks to make good on another of Trump’s promises: to construct a wall (or at least some kind of barrier) along the Mexican border.

“These two orders are part of an immigration reform we outlined during the campaign,” Trump said during a televised press event. “I wanna emphasize that we will be working in partnership with our friends in Mexico to improve safety and economic opportunity on both sides of the border.”

This appears to be an allusion to the second half of the president’s pledge “to build a wall”—”make Mexico pay for it.” Authorities in that country have maintained they will not underwrite any part of the new barricade, and it is unclear if or how Trump will force them to pony up.

The president has requested Congress to allocate some money for construction, though he insists this is merely a deposit that Mexico will ultimately repay.

Mark-Viverito, a Puerto Rico native, said that it was hard for her to “sit there” and listen to Trump talk about American families families that have lost loved ones to violent undocumented immigrants. She pointed out that New York’s sanctuary city policies—which include booting ICE officials from Rikers Island, and refusing to comply with many of their requests to detain individuals in custody—only apply to non-violent foreign nationals.

She insisted Trump was deflecting from “the true issue that we have at hand.”

“Utilizing families and their pain and using undocumented immigrants and putting the law in one lump-sum category and vilifying them as criminals is obviously a false narrative that he continues to hold up and it’s very dangerous and divisive to this country,” she said during a press conference after Trump signed the executive orders at City Hall. “This is a terrible day for United States of America and it is very, very frustrating how we are being divided and the false narrative that is being peddled by this highly insecure individual who’s using power to uphold that false narrative.”

Mark-Viverito said that the City Council is currently in the process of developing a full response, but said that they are making sure to take measures to protect the city against Trump’s policies. She also said that all the laws and policies the city has in place are protected and that the city will defend them.

In a conference call just a short time after the presser, the speaker told the Observer that the city could try to battle the Trump and his Department of Homeland Security in court.

“All options are on the table,” she said in the call, orchestrated by the liberal group Local Progress. “All of the laws that we have in place, all of the policies we have in place are legal, and we will be standing up and defending them.”

The arch-progressive Council speaker, an avid Hillary Clinton supporter, described herself at the City Hall briefing as “disgusted”—on the call, she said she was “pissed off.” She insisted a sanctuary city is merely “a city that embraces everyone,” and described the plight of  children that “come over the border fearing for their lives” and undocumented men or women who come to the United States seeking a better lifestyle for themselves and to be able to provide for their families back home.

In an analysis released in November, Comptroller Scott Stringer said that Trump’s plans could cost New York more than $7 billion in annual federal funding. Mark-Viverito said that she’s “not sure where he’s getting his numbers from.”

“I think it would be irresponsible to say that it’s $7 billion off the cuff,” she said.

Devon Puglia, a spokesman for Stringer, took to Twitter to clarify what Stringer’s figures, asserting that the city received a total of $7 billion prorated across multiple federal sources.

@madinatoure @scottmstringer what we did was lay out the buckets of federal funding NYC receives. Much is dependent on fed budget cycle.

Stringer was one of several New York officials to issue an indignant and outraged response to the president’s actions. The comptroller asserted that attacks on sanctuary cities “simply take America backwards.”

“Either the White House doesn’t understand the significance of its threats to defund sanctuary cities, or it does and is willfully turning its back on America’s legacy as the land of freedom and opportunity for all,” Stringer said in a statement. “Instead of building walls, we should be tearing down barriers. Instead of ripping families apart, we should be supporting them. We should be encouraging more immigration—not less.”

Mayor Bill de Blasio lashed out at the concept of the executive order as “immoral” this morning, before it was even released, and will appear again before the press this evening.

State Attorney General Eric Schneiderman also raised the possibility of legal action against the administration, insisting that the president does not have the power to deny federal monies to localities because of their law enforcement policies. He also reiterated arguments that hat sanctuary city policies facilitate relationships between police and undocumented victims and witnesses of crimes.

“The president lacks the constitutional authority to cut off funding to states and cities simply because they have lawfully acted to protect immigrant families,” he said. “Any attempt to bully local governments into abandoning policies that have proven to keep our cities safe is not only unconstitutional, but threatens the safety of our citizens.”

“I urge President Trump to revoke this executive order right away. If he does not, I will do everything in my power to fight it,” he continued.

Schneiderman was one of several prosecutors who wrung a $25 million settlement from the president last year for the practices of his Trump University real estate seminar program. He has also targeted the questionable fundraising and expenditures of his charity, the Donald J. Trump Foundation.

Public Advocate Letitia James said the executive orders “turned his dangerous campaign rhetoric into reality,” but swore that no executive action will change American values—which she said include supporting immigrants and denouncing racism and bigotry.

“In New York, we will continue to stand by our immigrant brothers and sisters,” James said in a statement. “We reject the President’s approach to sanctuary cities. We must and we will defy his efforts to divide us. We will fight the ban, we will fight the wall, and we will remain united.” 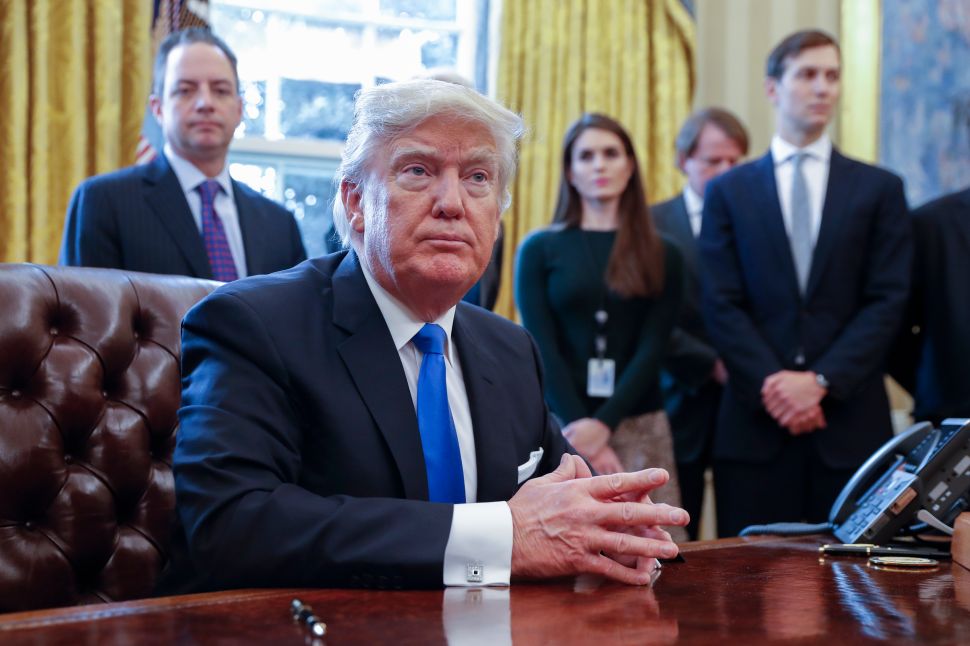