Democrats have lost three of the last four federal elections—2010, 2014 and 2016—in large part because they are still clinging to the comforting but false notion that voters punish bad behavior.

The Democrats’ 2016 presidential campaign essentially focused on proving Donald Trump was too boorish to be an acceptable occupant of the highest office in the land. And in the lead-up to the 2010 and 2014 midterms, Democrats railed against Congressional Republicans’ obstruction of President Obama, decrying the GOP’s refusal to give the administration any cooperation, even on issues where pollsters showed high levels of support from the public. Their complaints failed, and Republicans won.

More than two months after the stunning defeat of Hillary Clinton, there seems to be no evidence that Democrats have learned anything. They continue to harp on whatever makes Trump look “unpresidential,” and while there is unquestionably plenty of material there, it is also clear that there aren’t enough voters who care about such things to swing an election. If there were, Trump would not have prevailed.

Clinton won the popular vote, and she won it decisively, by nearly three million ballots. That brings us to another thing Democrats haven’t learned, but need to soon: the necessity of focusing on what’s important. In terms of winning and losing, it’s irrelevant that Clinton won the popular vote. Whether you like our unfair, undemocratic electoral college system or not (for the record, this columnist doesn’t), we’re stuck with it unless we change the Constitution or enough states band together to create a work-around. It’s fine that Clinton won by four million votes in California, but strategically speaking, it would have been far more important for Democrats to turn out another 80,000 votes in Pennsylvania, Michigan, and Wisconsin. If you can’t change the rules, you have to figure out how to win by the current ones.

In that vein, here’s another lesson Democrats need to learn: complaining about the rules won’t change the results. Take, for example, Democrats’ continued outcry over gerrymandering and voter ID requirements in Republican-controlled states. You can simultaneously accept that these devices are in place to suppress Democratic votes and also understand that as long as Republicans hold power, these devices will remain in place. If you want to change the rules, there’s only one way to do that: win elections. If that means mounting drives to help voters in states with restrictive voter ID laws get the necessary photo identification, then that’s what you have to do. You don’t have to like these laws, but you do need to get real. Stamping your feet and holding your breath until you turn blue will not win an election or change a law.

And here’s another, closely-related lesson Democrats would do well to learn: nobody cares about your feelings. You can march, yell, and sign petitions all you want, but your voice won’t be heard until you figure out where the correct pressure points are located.

Progressives are addicted to the affectations of powerlessness: the protest march, the petition, the complaint, and the incessant pleading for those who hold power to listen to them.

Now, look, it’s not entirely your fault if you don’t understand the political game. Americans generally grasp what we are taught about civics—but most of what we’ve been taught is a sanitized, idealized version that bears little, if any, resemblance to reality.

We are taught in school—to our everlasting disadvantage—that our elected officials, regardless of where they stand on various issues, are rational public servants who can be reasoned with. If we make enough polite phone calls, write enough letters, hold enough rallies, our voice will be heard. Nobody believes in this idealized version of our government other than progressives. (Conservatives are much more clear-eyed, and that’s why they win so often.)

So, let’s give grudging credit where credit is due. The political right grasps the way the system really works: one side or the other gets power, and, with that power, it does what it wants. The only way to block that side from implementing its agenda is to deprive it of its power.

Conservatives understand the importance of power, and they go all out to get it and to block their opponents from exercising it. Progressives, meanwhile, are addicted to the affectations of powerlessness: the protest march, the petition, the complaint, the indignation over unfair play and hypocrisy, and the incessant pleading for those who hold power to listen to them.

It would serve the left to stop clinging to an idealized version of how things should work and instead accept how they things actually work. It is far more important to understand power: what it is, how to get it, how to use it, and how to keep it.

And, by the way, can the “goo-goos” on the left grow up and stop acting as if power is an inherently evil thing? Power can be used for good or bad, depending on who wields it and what they want to accomplish. But powerlessness never ends well. It is progressives’ squeamishness about power that prevents them from ever wielding it very effectively, or for very long. When you’re in love with the notion of fighting the power, it makes actually getting and wielding power very difficult.

Nothing gets accomplished without power. You can’t implement your agenda otherwise. Your opponents are not going to give you what you want just because you signed a petition, or marched, or called your congressman’s office and asked politely.

This failure to understand and accept these facts is why for most of the last two decades the Democratic Party has consistently failed to achieve its most important purpose: winning elections. The Democrats have won three of the last 10 federal elections. Two of those elections occurred in 2008 and 2012, when Democrats had the good fortune of having a once in a lifetime candidate, Barack Obama, at the top of the ticket. The third, in 2006, occurred when the George W. Bush administration’s utter incompetence at multiple levels angered swing voters enough for them to throw his party out of power.

In order to regain and maintain power, the Democratic Party is going to have to do a better job of recruiting good candidates and getting Democratic-leaning voters to turn out in all elections, not just presidential races in which a charismatic candidate leads the ticket.

This starts with involvement at local-level elections. Many of the conservatives who took over school boards and town councils in the past have become today’s state legislators and members of Congress. No election is too small or unimportant to participate or to vote in. Even if you don’t have schoolchildren of your own, that local school board election could be the jumping-off point for the person who will be your governor or senator in 20 years. Republicans have been eating Democrats’ lunch at the local levels for many years by building their bench and getting their activists involved.

The Tea Party movement that started early in Obama’s first term has been decried by the left for its positions and tactics, but the Tea Party undisputedly understood power. It organized, took down hundreds of incumbents at all levels of government, and it became a powerful force that establishment Republicans were afraid to cross for fear of being challenged at the primary level.

Progressives need to take a lesson from the Tea Party if they want to advance their own agenda. Merely being loud and visible isn’t going to cut it. They have to organize, and they have to vote in every election: presidential, midterm, primary, and special. Only when they demonstrate a credible threat to politicians’ jobs will they get what they want. Winning, not whining, is what creates change. 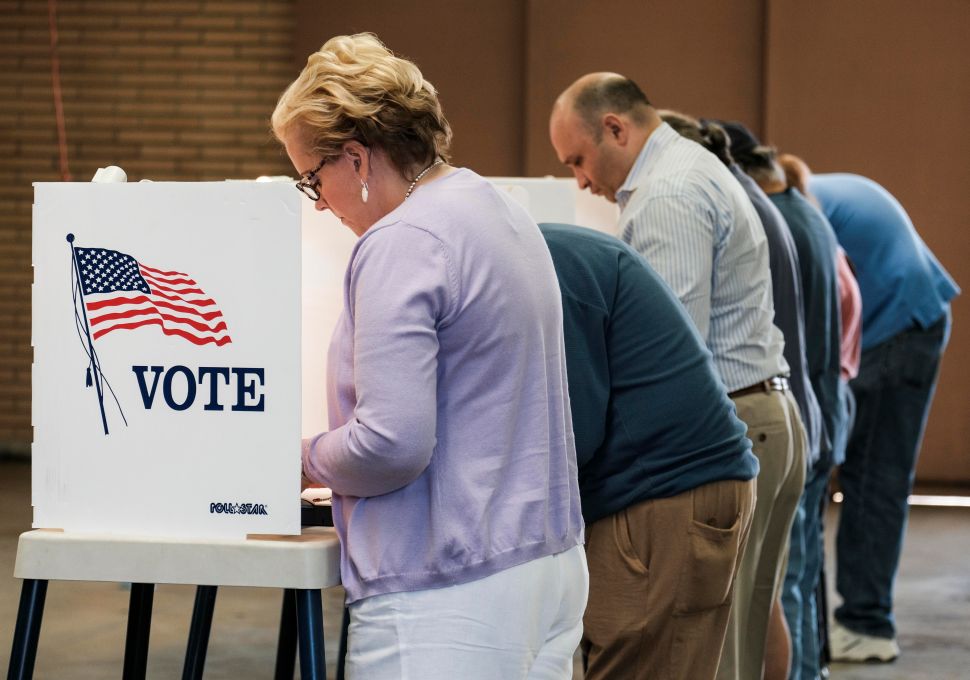