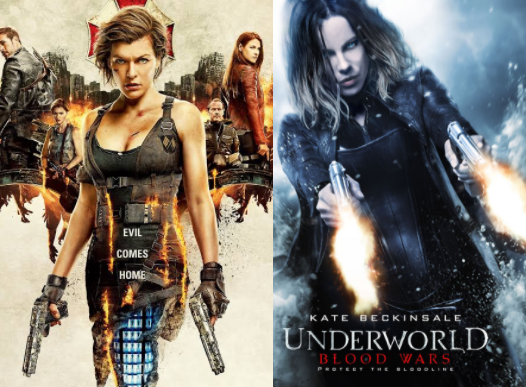 VAMPIRE: Looks like you’ve reached the end of the line, Werewolf.

WEREWOLF: Oh is that right, zombie?

VAMPIRE: I’m not a zombie, I’m a vampire.

WEREWOLF: Wait, okay, is this a zombie movie?

VAMPIRE: No, wait. Wait, okay. This is vampires vs. werewolves.

ZOMBIE: Why am I here though? Which one of you is a vampire?

VAMPIRE: I was talking to the zombie.

ZOMBIE: I’m a zombie. This movie is Resident Evil: The Final Chapter.

WEREWOLF: No, this is Underworld: Blood Wars. These are two separate movies.

ZOMBIE: Are you sure?

ZOMBIE: And welcome to Resident Evil: The Final Chapter.

ZOMBIE: Okay, dropping the whole zombie braindead schtick to try to clarify here. Underworld and Resident Evil are two different franchises that are similar in a lot of ways — and just a passing glance at their trailers renders them indistinguishable from one another — but one is zombies and the other is vampires vs. werewolves.

VAMPIRE: No. Zombies is Resident Evil. Vampires is Underworld.

VAMPIRE: It’s both in fact. Underworld is vampires and werewolves. Resident Evil is just zombies.

WEREWOLF: Is this Resident Evil or Underworld, I’m so confused.

EXT. NIGHT. EITHER RESIDENT EVIL OR UNDERWORLD. ONE OR THE OTHER

ZOMBIE: I want everyone in the audience to know this is Resident Evil: The Final Chapter.

VAMPIRE: My head hurts so much. Are we 100% sure this isn’t the same movie. I’ve seen both trailers. They’re nearly identical. Just a lot of explosions and CGI and monsters and people dying.

ZOMBIE: They’re definitely different. Zombies are different from vampires, though they’re both dead.

WEREWOLF: Werewolves are not dead.

VAMPIRE: Okay I’m sorry to do this, can we just watch the trailers for both Underworld: Blood Wars and Resident Evil: The Final Chapter again?

[VAMPIRE, WEREWOLF, AND ZOMBIE GATHER AROUND COMPUTER AND WATCH TRAILERS FOR UNDERWORLD: BLOOD WARS AND RESIDENT EVIL: THE FINAL CHAPTER]

ZOMBIE: They’re alike in a lot of ways. There’s a lot of guns and violence and everything’s dark and hard to make out what’s happening.

VAMPIRE: And yet, they’re separate movies.

[20 SOLID MINUTES OF GUNFIRE BREAK OUT]

WEREWOLF: Is this Underworld or not.

EXT. NIGHT. BOTH RESIDENT EVIL AND UNDERWORLD AT THE SAME TIME, HAPPENING SIMULTANEOUSLY

ZOMBIE: We have to defeat the humans once and for all.

VAMPIRE: And the werewolves, while we’re at it.

WEREWOLF: And the vampires.

ZOMBIE: And the humans, right?

VAMPIRE: Yes, for sure, but also the werewolves.

WEREWOLF: Along with the vampires.

ZOMBIE: And the humans.

[40 MINUTES OF THIS ARGUMENT]

WEREWOLF: Should we fight the zombies? I don’t even know at this point how to feel about zombies.

ZOMBIE: Us zombies are fine. We’re called a “resident evil” but that’s just because it’s the name of this movie.

VAMPIRE: This is Underworld: Blood Wars, not Resident Evil: The Final Chapter. I’m 80 percent sure.

WEREWOLF: I’m going to throw up. This is a total nightmare, plain and simple.

ZOMBIE WEREWOLF: What the hell is happening?

VAMPIRE ZOMBIE: I’m a vampire, and also a zombie. Both at once.

WEREWOLF VAMPIRE: I still believe, despite being a genetic werewolf-vampire hybrid, that Underworld and Resident Evil are two completely different movies. They have to be.

ZOMBIE VAMPIRE: I believe that too. Saying this as both a zombie and a vampire. Both the zombie and vampire are saying this. We all agree.

MUMMY: There’s a mummy now. I have introduced a mummy to this whole situation.

[ZOMBIE, WEREWOLF, AND VAMPIRE ALL LYING FACE DOWN ON THE GROUND]

WEREWOLF: Let me posit this: If I could open up a portal in time and space allowing me to go back and prevent both the Underworld and Resident Evil franchises from ever happening, I would do that. In a heartbeat.

ZOMBIE: If I spend too much time thinking about my own existence, it’s as though I can feel my skull literally separating into several dozen pieces.

WEREWOLF: You’re thinking of the Blade movies. Those are — it’s — those — god. I can’t.

ZOMBIE: Wait, which one is Blade?

WEREWOLF: It’s basically this. Just all of this, but a little different.

VAMPIRE: So, a third franchise.

WEREWOLF: I don’t want to to do this anymore.

ZOMBIE: This is Resident Evil: The Final Chapter. 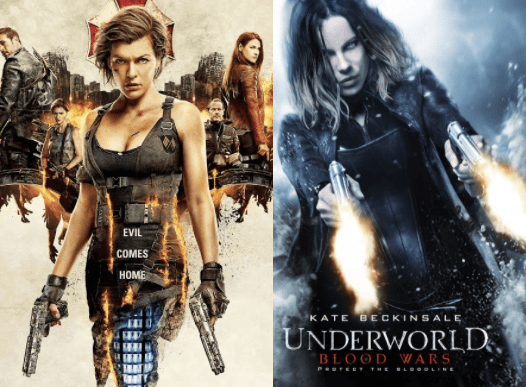