Three weeks ago, I counseled President-elect Donald Trump that going to war against the spies is never a good idea in Washington. Our Intelligence Community knows lots of things, not all of which would be flattering to someone whose retinue includes so many people with odd connections to the Kremlin. When spies get angry, they call reporters and arrange discreet chats in parking garages. The last president who entered the Oval Office with this much dislike and distrust of the IC was Richard Nixon—and we know how that worked out for him.

Trump has now outdone Nixon, upping his war on the spooks even before his inauguration, by making plain that he believes Moscow—not our country’s spies—regarding the issue of Russian interference in our election. As I’ve explained in detail, although there is no evidence that the Kremlin literally “hacked” our election in 2016, there’s a mountain of evidence that Vladimir Putin’s intelligence services stole Democratic emails then went public with them via Wikileaks to hurt Hillary Clinton.

However, the president-elect refuses to accept the consensus view of the IC, not to mention many outside experts who have confirmed their analysis. In response to President Obama’s recent public statement pointing a finger at the Kremlin for their misdeeds against our democracy, backed up by rather mild sanctions on Moscow, President-elect Trump has pursued his customary tactic of denying, doubling-down, then denying some more, regardless of any evidence proffered.

Trump and his mouthpieces continue to deny that Russians had any role in our 2016 election, which is a patent falsehood. Indeed, a few days ago, the president-elect promised to deliver revelations by the middle of this week about what happened with those Democratic emails, adding that he knew “things that other people don’t know” about the hacking. Here he apparently channeled O. J. Simpson, whose quest to find the “real killers” of his ex-wife and her friend remains unfulfilled, more than two decades later.

Trump’s promise was empty, and there is no new evidence to contradict the IC’s conclusion that Moscow stood behind the operation to politically harm Hillary Clinton and her party last year. Like his promise to reveal President Obama’s “real” birth certificate—which would show he was born in Kenya, or Mars, rather than Hawaii—this was no more than another cynical Trumpian publicity stunt.

The facts are in regarding the theft of Democratic emails, and the only people seriously disputing them are those in thrall to Vladimir Putin one way or another. (For an excellent quick primer on the evidence, this cannot be beat.) The promised “new evidence” seems to be no more than the latest lies proffered by Julian Assange in his most recent obsequious interview with Sean Hannity of Fox News. Here, Assange once again stated that Wikileaks, which he created a decade ago, didn’t get the Democrats’ emails from the Russians.

The source of the purloined emails was “not the Russian government and not a state party,” explained the fugitive holed up in Ecuador’s London embassy since 2012, as Hannity fawned over his unsubstantiated claims. Assange’s line—which naturally leaves open the door to a third-party source between Wikileaks and Moscow, what spies term a “cut-out”—is that he won’t say who the source was, but it definitely wasn’t the Russians. Since the evidence for Wikileaks serving as a front for Putin’s intelligence service for years is now overwhelming to anybody even marginally acquainted with espionage, there’s no need to take any of Assange’s absurd claims at face value.

Yet Team Trump does. Kellyanne Conway, who managed Trump’s campaign to electoral success and is soon to take up a plum job in the new White House, urged the public to take Assange’s alleged  “bombshell” seriously. The new administration has solidified its message on the election: whoever it was subverting our democracy, it sure wasn’t the Russians.

The president-elect has jumped on the bald-faced denial bandwagon too, offering quick backup to Assange on social media in a series of remarkable tweets last night and this morning. First, he mocked the American spies who suggested that maybe it actually was the Russians.

Then, in addition to tweeting support for Assange’s assertion that Obama is trying to undermine his successor with propaganda about the Russians, the president-elect cited the fugitive’s claims:

Julian Assange said "a 14 year old could have hacked Podesta" – why was DNC so careless? Also said Russians did not give him the info!

The president-elect’s unsubtle mocking of our spies was prominent, as was his need to put “Russian hacking” in quotes with the “so-called” jibe. Trump has made abundantly clear that he believes Moscow—not the government he is about to take over in a couple weeks.

It’s time to be clear about what is happening. Our soon-to-be commander-in-chief is publicly ridiculing our security agencies, while backing a fugitive on the lam from rape charges who is also an agent of the Kremlin. To call this situation unprecedented is an understatement.

Trump has backed himself into a corner with his refusal to consider that the Russians might have had a role in the attacks on his rival in 2016. Now, he is stuck, since the IC shows no sign of wavering from its conviction that the Kremlin is the guilty party. If the president-elect has no evidence beyond the unsubstantiated assertions of an accused rapist hiding in an embassy for over four years, he has no leg to stand on.

Moreover, even his supporters are starting to wonder what’s really going on. Sen. Tom Cotton, a Trump backer, today made clear that he, like many fellow Republicans, doesn’t support the president-elect on the issue: “I have a lot more faith in our intelligence officers … than I do in people like Julian Assange,” he stated on MSNBC.

Democrats, too, are casting grave doubts on what Trump is up to. Despite the president-elect’s recent fawning over Sen. Chuck Schumer, whom he said he likes better than fellow Republicans in the Senate, the new minority leader explained that Trump was “really dumb” for attacking the IC, adding, “Let me tell you, you take on the Intelligence Community, they have six ways from Sunday at getting back at you.” Here Schumer spoke the truth, and our spies right now are seething at the repeated insults thrown their way by the president-elect.

What our counterspies are also doing these days is piecing together a puzzle of Russian espionage operations against America during the two terms of the Obama presidency. As I explained, these isolated stories actually aren’t; they form a mosaic of interlinked Russian spy-games aimed at the heart of Washington—and our democracy.

Recently I sat down with an old friend and onetime partner in the SpyWar who’s a senior IC counterintelligence official. We reviewed the cases, one by one, over coffee. First, Ed Snowden, who’s been in Russia under Kremlin protection since June 2013. It’s well established that Snowden was no whistleblower, in fact he was motivated to steal 1.5 million classified documents from his employer, the National Security Agency, because he got reprimanded at work for being a jerk, emailing top NSA officials with minor complaints when he was just a low-level IT contractor.

He wanted payback, and he sure got it, but Snowden, a sysadmin who never actually worked in intelligence operations, really knew very little about what NSA does. He simply stole whatever top secret files he could get his hands on and passed them to the press—and the Russians. Snowden was no more than a patsy. He was never a Russian mole—indeed, he served as cover for the real moles inside NSA and its Anglosphere Five Eyes intelligence partners. There’s no reason to think he gave Moscow very much about NSA which the Russians didn’t know already.

What Snowden did possess, however, was an enormous trove of classified files that created a global sensation. That Russian propaganda offensive, what can be called the Snowden Operation, did enormous damage to NSA, the IC, and their longstanding intelligence partnerships with nearly the whole Western world. The Kremlin has tried to do this for decades, and they finally hit pay-dirt with the malcontent Snowden and his purloined PowerPoints.

The Snowden Operation likewise did great damage to the IC’s reputation at home, convincing millions of Americans that NSA is spying on them—when, in fact, they do not. However, this distorted image became gospel truth to many citizens, including some on the right who never liked Big Government, and really didn’t like it when it was in the hands of Barack Obama.

Thus did the notion that NSA and the IC are the enemies of Americans, rather than their protectors which they actually are, become a meme in our politics. This has been very useful for Donald Trump as questions have mounted about his actual ties to the Kremlin. In the post-Snowden era it’s easy to dodge such awkward queries, at least for a while, with implications that American spies are crooks and liars anyway, so why believe them about anything?

The common denominator between Trump and Snowden, of course, is Wikileaks. It was Assange who told the fugitive to seek refuge in Moscow back in mid-2013, just as it was Assange who led the charge in 2016 to take out Hillary Clinton at the ballot box. Counterspies don’t like coincidences, and this is very big one indeed. “It all sounds like a really successful linked op for the Kremlin to me,” was how my old friend summarized our walk-through of the spy cases with a wry smile.

The key question now is: Why does Donald Trump feel the need to protect Putin and his spy agencies at every turn, on every issue, no matter how flimsy and evidence-free his defense might be? This is the question which must be asked, and answered, preferably before he officially becomes our 45th president.

Trump may soon learn that you really can’t fool all the people, all the time. One year ago, I reported extensively on Hillary’s emails, based on leaks from angry members of the IC who wanted her to pay a price for exposing our secrets to foreign intelligence agencies. I stated then, and many times after, that #EmailGate would be ultimately sink Clinton. There were many doubters and Hillary looked like a shoo-in, but I was right. Now I want to state that, unless he comes clean and starts accepting reality soon, Trump’s inexplicable gullibility about the Russians will prove to be his political undoing. 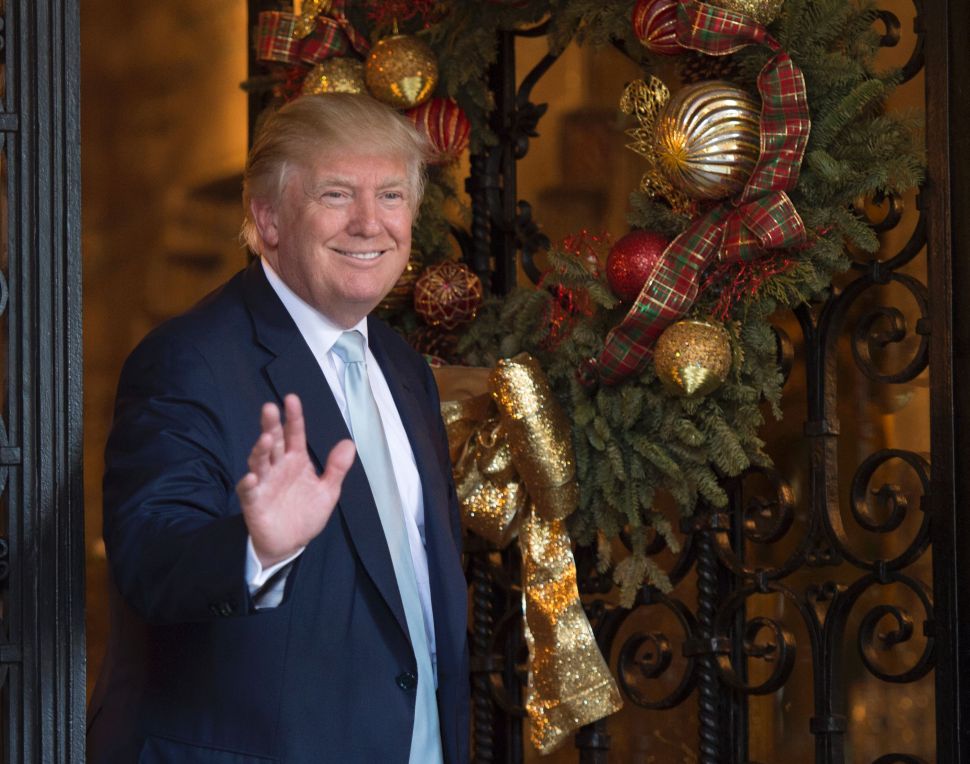