Hey, how’s everyone’s 2017 going so far? Cold enough for you? What’s up with the President maybe liking pee? Weird, right? Ha, so, yeah, enough with the chit-chat we should definitely talk about this thing on NBC called Emerald City because whoa boy, I have a bearded Vincent D’Onofrio’s worth of thoughts on this Wizard of Oz reboot.

I DO know that Emerald City is the direct result of some evil thing hooking the cheerful, technicolor classic The Wizard of Oz up to the death machine from The Princess Bride and sucking every ounce of life out of it.

I’ll admit, The OA must have temporarily broken my wonk-a-meter because I didn’t get around to watching Emerald City until today, about a week removed from its premiere. But holy wow, I watched it. I watched all two hours of its double-header premiere, doubly titled ‘The Beast Forever” and “Prison of the Abject.” I do not know what either of those terms means. I DO know that Emerald City is the direct result of some evil thing hooking the cheerful, technicolor classic The Wizard of Oz up to the death machine from The Princess Bride and sucking every ounce of life out of it. It is the gritty reboot to end all gritty reboots, an exercise so joyless Ben Affleck’s Batman reviewed it like “jeez, take a breath.”

But first, the basics! Adria Arjona is Dorothy Gale, a nurse who enjoys casual sex with coworkers (cool!) but not commitment (understandable!). She steals pain medicine from work (bad!), but it’s for her sick Auntie Em (moral!). Dorothy, who was deposited on the Gales’ doorstep as a child, decides on her 20th birthday to reach out to her biological mother. Hammering home the lesson that orphans should never try, Gale finds a dead policeman in her mother’s home, and then a tornado whisks her (and the policeman’s K-9 dog) away to the mystical land of Oz.

Immediately upon landing in this updated Oz, which is WAY more Narnia than copyright law should allow, Dothory accidentally runs down the “Mistress Of the Eastern Wood,” who was just standing out there in the road practically begging to get hit by a flying cop car. I don’t even feel bad, to be honest. Some people who do feel bad are the Mundjekin (like Munchkin? Do you get it? DO YOU GET IT?), who are less rumpled, dancing little people in this take, and more savage woodland barbarians who, while not explicitly stated, I almost have to assume practice human sacrifice.

The Mundjekin immediately waterboard Dorothy under charges of being a witch.

Eventually, the Mundjekin choose to exile Dorothy over slow death by -torture, and send her packing from their land (along with the dog. Did you know “Toto” is “dog” in Mundjekin? Well fuck you, that’s the origin of that). Almost immediately, she runs into Emerald City‘s take on the Scarecrow, famously portrayed with moppy lovability by Ray Bolger in the 1939 original. Here, he’s dubbed Lucas, played by Oliver Jackson-Cohen, and isn’t a scarecrow per se, he’s just a man horrifically crucified on the side of the road.

Here’s a twist: Only a witch can kill a witch, so the Mistress of the Eastern Hooziwhatzit revives herself and catches up to Dorothy and Lucas. Holding them under some torturous mind-control, the witch goes through their things and finds the policeman’s gun from the cop car. Dorothy, showing surprising presence of mind for a TV character, uses her other-worlds knowledge of how guns work to trick the witch into shooting herself in the fucking face.

Remember in the Wizard of Oz when the Wicked Witch of the West was like “I’ll get you, my pretty!” and Dorothy tricked her into hanging herself with a leather belt?

Anyway! Let’s check in on the actual City of Oz, where Emerald City has replaced the whimsy and magic of the original film and replaced it with some truly petty squabbles between some witches and wizards. There is no “good” witch here, by the way. There’s only “clearly super evil and maybe has sex with corpses witch” West (Ana Ularu), and “blonde but definitely also not chill” Glinda (Joely Richardson). Stuck in the middle is The Wizard himself, played by Vincent D’Onofrio looking like Santa Clause back when people just called him Nick. And really, say what you will about Emerald City, but whatever it is D’Onofrio is going for here, I’m at least in for that. His performance reminds me of Forest Whitaker as Saw Gerrera in Rogue One, in that you can imagine the exact moment both these occasionally classy actors dropped the script and said “fuuuuuck itttttttt.” Look at him go!

There’s…so much more that happens in the premiere. There’s a witch funeral that involves some spastic, jarring dance moves. Lucas and Dorothy run afoul of another witch named Mombi (Fiona Shaw, doing her darndest), who is keeping a boy named Tip prisoner to “protect him.” At the end of the episode, Tip turns into a girl. There’s some stuff with lions, but they’re not cowardly, they just eat human flesh.

The point is, none of it is fun, or engaging, or worth a second look. It is the wonderful wizard of slog. Director Tarsem Singh is not exactly a master at picking projects (okay, I liked The Cell…in 2000!), and follows this yellow brick of cocaine stop to stop, pausing only to make something from your childhood memories shoot itself in the dick.

And yet…and yet, this might be exactly why viewers–me included? I daren’t say–may come back to Emerald City. It is endlessly, ghoulishly fascinating to wonder which ways this show can update The Wizard of Oz as darkly as possible. Like, the Tin Man will have a heart, but it’s ruined by his morbid obesity and diabetes. The Cowardly Lion is only going to be “cowardly” because he suffers from crippling depression. One of the flying monkeys is going to get shot by a zoo guard and turned into an internet meme. Who knows! Maybe that’s the real magic of this show. If expertly dragging a beloved, magical movie through a mile of blood, dirt and misery makes you a wiz, then Emerald City is a whiz of a wiz, if ever a wiz there was.

Take it away, Vin. 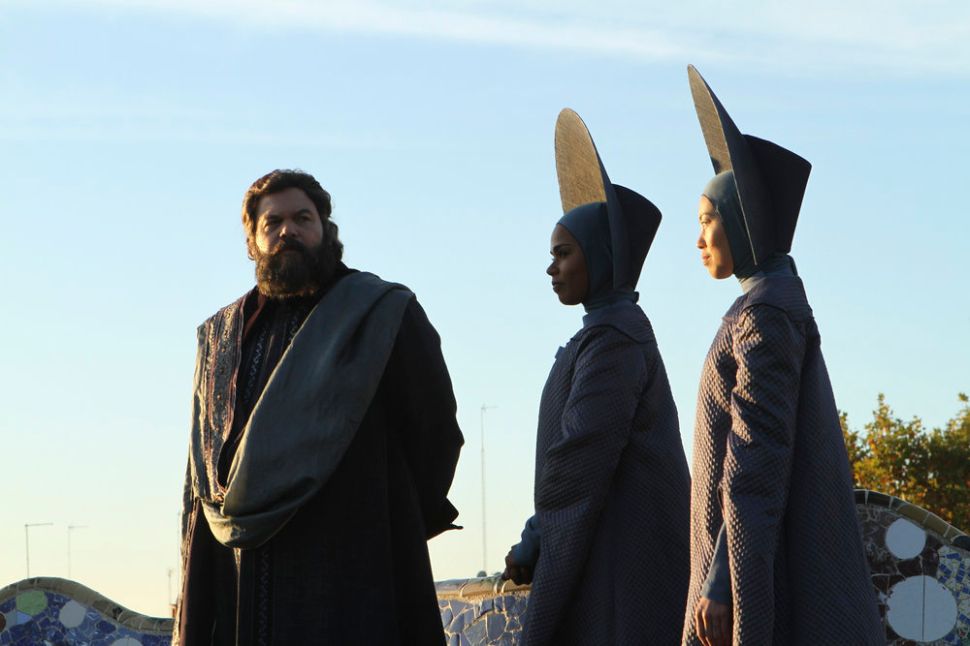