Most Americans, 38 percent to be exact, set out to start off a new year on a healthier foot, with a weight-focused New Year’s resolution. Equinox, the high-end gym where many of us head to tackle that goal, prefers to kick off the new year with just a touch of controversy.

For 2017, Klein has returned to lend his lens to the campaign; the provocative imagery has also remained. This year, even more social issues are visited, as model Jessica Stam lounges in a garden of cannabis plants and male model Diego Villarreal remains calm as a swarm of bees cover his body. Also included in the campaign is Samantha Paige, who proudly displays her mastectomy scars. As a survivor of thyroid cancer and the carrier of the BRCA-1 gene mutation, she still strikes a stunning pose in a blunt bob and a slash of dark lipstick.

Equinox worked with Wieden & Kennedy and casting agent Noah Shelley, at AM Casting, to piece together the faces of the campaign. But, according to Equinox’s executive creative director, Elizabeth Nolan, a model just wouldn’t do for this particular image. “We really believed that we had a great, strong message, but we needed the strength of somebody whose message we could really tell,” she explained.

Paige was discovered online, where she stood out from the social media community of women who have encountered similar hardships. “We met Samantha and I don’t think any one of us had a dry eye when she left the casting room. She’s such an incredible woman and she has such a great, empowering story. Finding her was the last piece of the puzzle for realizing how important this image could be,” Nolan told the Observer via telephone.

In another image, male model Brian Shimansky (well-known for having a side gig as a woodworker) lounges poolside, while a team of four tends to his grooming needs. Further on in the series, heavily freckled model Souffrant Ralph stands out from a crowd of concert goers, but not because of his looks. He’s the centerpiece of the photo because the 21-year-old is the only one without an iPhone obstructing his face.

“I view my work through the eyes of a photojournalist, as I draw influence from what’s going on outside my door every day. This approach lends itself naturally to this year’s Equinox campaign, where we’re using imagery to tell highly personal stories and inspire conversation about important issues,” explained Klein of the images.

Sparking a conversation is actually exactly what Equinox has set out to do with these images. Some of them are hard to look at, others evoke actual feeling. And that’s why they don’t provide any dialogue for the images. It’s up the viewer to interpret the photos, and decipher their own meaning behind them. And if you’re wondering what a picture of a guy wearing VR glasses has to do with a pricey gym, well, you’re not alone.

“The number one piece of feedback on the less positive side we get each year is ‘what do these images have to do with a gym?’” admitted Nolan. She went on to point out that Equinox’s overall tagline is “‘It’s not fitness. It’s life.” So rather than thinking about an elliptical when you think of Equinox, they want you to think about having a healthy lifestyle. And rather than taking a boxing class just for cardio, this gym wants your instructor to teach you how to fight back, in all facets of life.

So, yes, you can enjoy these pretty pictures, but don’t forget to read between the lines. 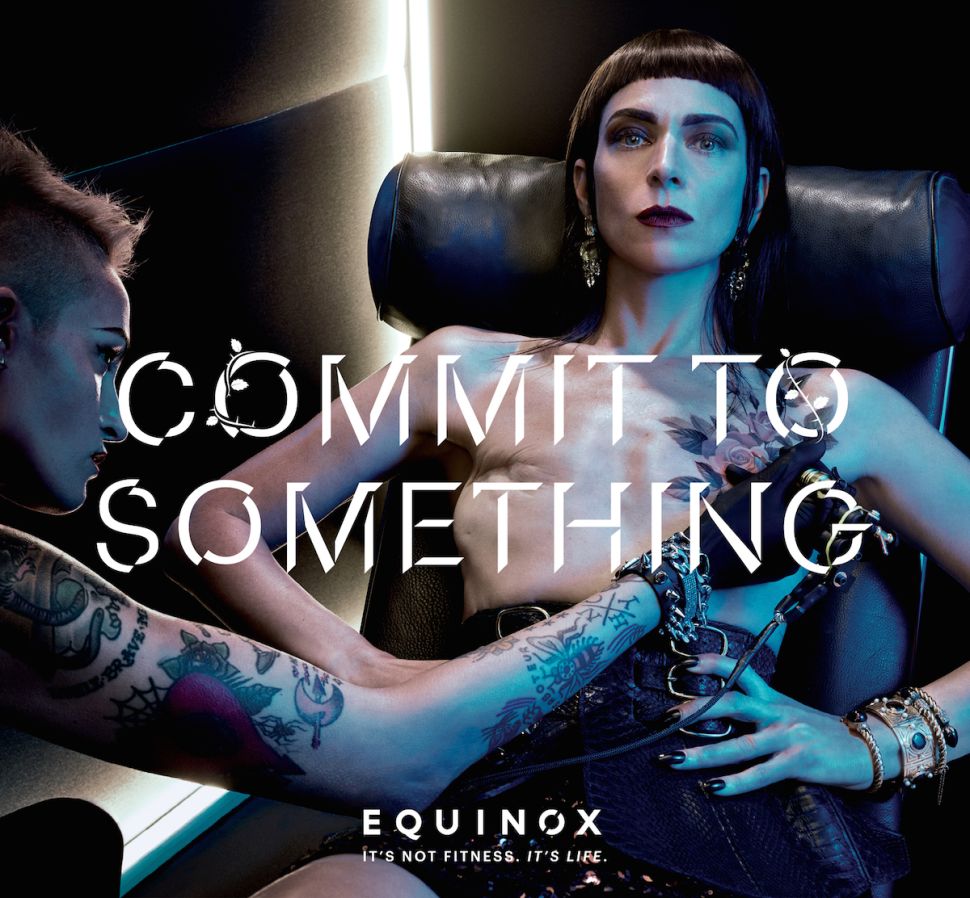