Sen. Bernie Sanders supporters predominantly support Congressman Keith Ellison due to his decision to formally endorse Sanders during the 2016 Democratic primaries, while the Democratic establishment rallied around Hillary Clinton. In return, Sanders and his progressive organization, Our Revolution, formally endorsed Ellison to serve as the next DNC chair. Ellison’s formal endorsement of Sanders wasn’t the first time the Congressman took a principled and politically unpopular stance within his party.

“I remember years ago we used to go after people we said were communists. Then we went after gang members during the whole war on drugs and that literally led to the incarceration of a whole generation of African-American men. So now okay Muslims are the new thing,” said Ellison in the 2014 HBO documentary The Newburgh Sting, which followed a case of four black American men who were conned by an FBI informant to participate in a terrorist plot. Under the direction and the manipulation of the informant, the four were placed under arrest once the act was to be executed by the four men, including the informant. The four individuals had no ties to Islam or the Arab region, but nonetheless they were labeled as Muslims. “When I was elected, I was the first Muslim ever to be elected to Congress, and we experienced a torrent of invective and hate and all kind of suspicion and insult. When you channel a vast array of law enforcement resources towards a particular community, no doubt you’re going to get some bad actors because there are bad actors in every community,” Ellison says.

Rather than an anomaly, the use of FBI informants and their tactic of entrapment has been a pervasive trend in the bureau, which former FBI officials in the documentary attribute to the massive amount of funding the bureau receives to combat the war on terror. “Fear is among the most potent motivators of the human condition. It justifies invasive spying on not just Muslims, but everyone,” added Ellison. “It justifies just literally a geyser of money. The FBI actually have members of Congress prepped, because we know our constituents are afraid. We’re so highly sensitive to public opinion, media, showing we are going to stand up against the Big T (terrorism).” In contrast to Ellison, news clips were featured in the same documentary of Senate Minority Leader Charles Schumer commending the efforts of the sting operation.

Bernie Sanders‘s penchant to transcend above the political fray of partisanship and the influence of wealthy donors won him nationwide support. Though Ellison has exhibited the will to do the same in the past, since he announced that he is running for DNC chair, he has shifted toward courting the Democratic establishment, whose votes he needs to win the DNC chair position.

Ellison formally endorsed billionaire donor Stephen Bittel to take over the Florida Democratic Party as its chair, despite the corruption and cronyism the establishment exercised to get him elected. Ellison also openly dismissed all criticism of Hillary Clinton from the left. He attended a closed-door conference held by billionaire donor George Soros after the election, and he will be attending a forum during inauguration weekend at a resort in Florida with other DNC Chair candidates, where they will be vetted and likely selected as the next DNC chair by Clinton propagandist David Brock and the Democratic Party’s wealthiest donors.

Watching a progressive and activist pander to the establishment is not the type of change progressives want from in the Democratic Party, nor will it help Democrats to unbind themselves from the special influences that subvert the party’s ability to fight for working and middle class Americans. Ellison needs to return to his progressive roots rather than morph himself into an establishment politician to expedite his career under the false pretenses of being progressive. 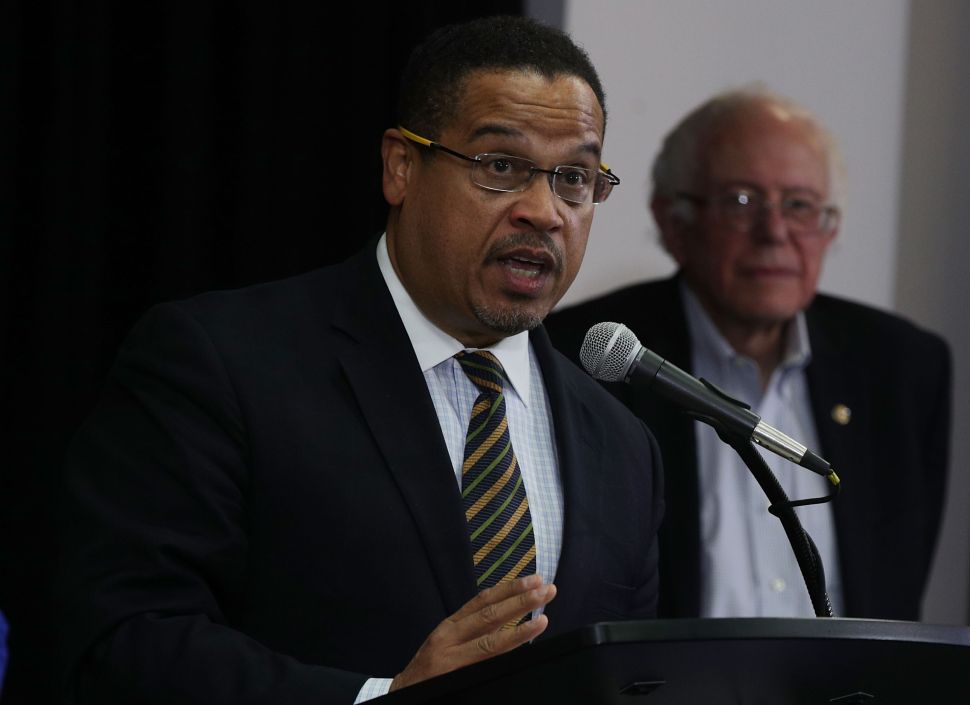