In replacing Megyn Kelly with Tucker Carlson in the 9 p.m. hour on weeknights, the right-wing Fox News Channel gets exactly what it needed: A belligerent, conservative, reactionary white man who is dismissive of liberals, progressives and academics and is favorable to President-elect Donald Trump.

Carlson’s show will appear between the O’Reilly Factor and Hannity, two other prime-time shows hosted by belligerent, conservative, reactionary white men who are dismissive of liberals, progressives and academics and are favorable to Trump.

No doubt The Great Leader—whose campaign included large doses of race-baiting and religion-hating—enjoyed Tucker Carlson Tonight on Thursday at 7 p.m.

He opened with blurry and disturbing video of four young black people torturing and taunting a white teen they held captive in Chicago. It’s the kind of red meat Fox viewers crave to help them believe that white people are the real victims in America today.

Carlson’s producers kept flashing the torture scenes on screen for most of the first six minutes.

During Carlson’s subsequent interview with an African-American named Richard Fowler, the headline at the bottom of the screen said “Tucker Takes on Liberal Radio Host.”

The alleged perpetrators—charged with multiple felonies Thursday—used racial slurs and Trump’s name in what appeared to be a hate crime.

“So is this revolting attack a sign that anti-Trump hysteria is fueling violence?” Carlson said. “And is the national media downplaying its existence?” Carlson said The New York Times, Washington Post and Boston Globe refused to give the story the coverage it deserved.

Near the end of his show, Carlson presented a piece sympathetic to a white professor at Oregon who was suspended for attending a Halloween party in blackface.

“Every night at 9 is Tucker time!” the voice said. “Nothing off-limits! No holds barred! And no bull! Tucker is taking prime time to the next level!”

Replacing Carlson at 7 p.m. will be Martha MacCallum. That hour used to be hosted by Greta Van Susteren, who left Fox last summer. By coincidence, Van Susteren was announced Thursday as the host of a new show at 6 p.m. on MSNBC.

In addition to being user-friendly for Trump on his sanctuary network, Carlson adds a nasty confrontational approach perfected years ago by O’Reilly and Hannity. When he doesn’t agree with people, Carlson simply shouts over them and mocks them.

But Carlson does not always pull this off successfully. One of his failures came just last month when he interviewed Lauren Duca, a writer for Teen Vogue.

Carlson began the segment by implying that Duca—who had been critical of Trump and his daughter, Ivanka—had defended a verbal attack against Ivanka Trump by a fellow passenger on a commercial airliner.

Duca quickly explained to Carlson “No one should endure confrontations . . . I don’t want anyone being yelled at on a plane.” She said she agreed with Carlson on that one major point.

With the premise for attacking Duca neutered, the flustered Carlson—punching down—tried to goad Duca into a shout-fest. She was too quick and too bright for him.

When he asked her about Ivanka Trump’s reportedly liberal views on what are called women’s issues, Duca said “We need to be investigating those things a little more critically and rigorously and not be blindsided by the fact that she looks like she smells like vanilla.”

This irked Carlson, who got little sympathy from his guest. He didn’t like Duca’s use of the words “sinister complicity” in describing how Ivanka Trump advanced the political fortunes of her misogynist father.

How dare Duca say such a thing?

“Oh, honey, oh my goodness,” Duca said to Carlson. “It’s sinister for a daughter to capitalize on the power of feminism in uniting and empowering women while supporting a candidate who is the most anti-woman candidate this country has seen in decades.”

In what has become one of his stock ploys, Carlson feigned ignorance and incomprehension, his face scrunched into a quizzical expression.

DUCA: “Tucker . . . you’re shouting over me every time I speak. It’s incredibly unprofessional.”

DUCA: “You’re not. You’re absolutely being a partisan hack who is just attacking me ad nauseam and not even allowing me to speak.”

With a smirk, Carlson tried to ridicule her employer, a neat trick for anyone who works at Fox.

CARLSON: ”You wrote this piece in Teen Vogue, which I guess you write for.”

Later, Carlson tried coming back with another personal shot.

CARLSON: “Does Trump make you feel like you’re crazy? That’s the impression I’m getting.”

DUCA: “Oh, my God. Are you calling me crazy? That’s adorable. That’s so you.” 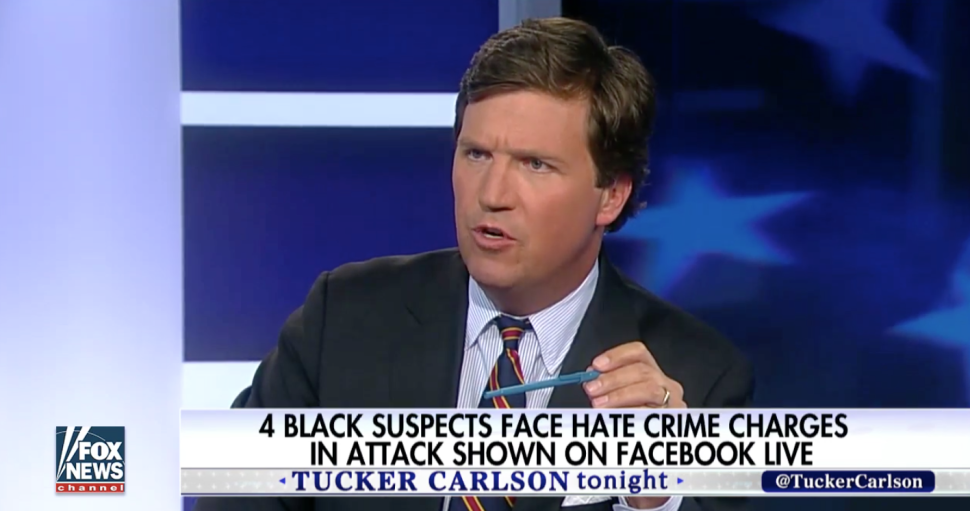